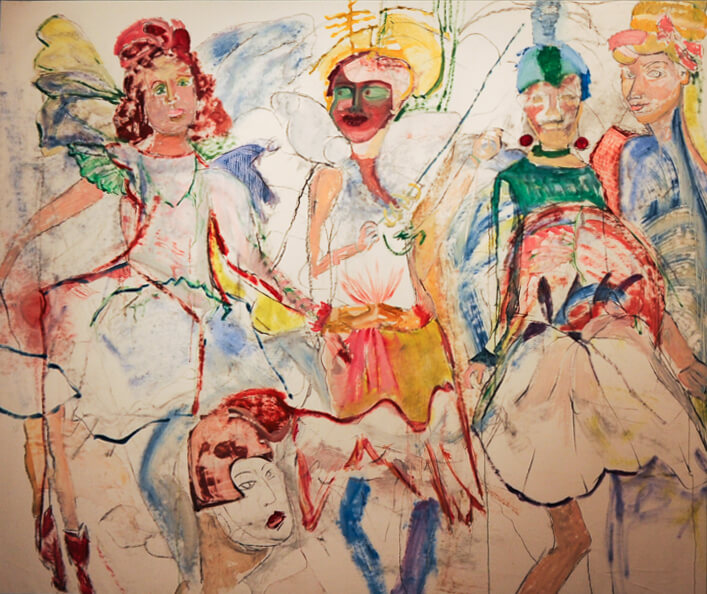 After years of quiet studio practice with little local public visibility, painter Mary Murphy has burst onto the art scene again. In April, an exhibition at Gallery 72 featured recent work done in her Omaha and New York studios. Now, the Cathedral Arts Project’s Sunderland Gallery provides an expansive look at the artist’s career in a show that runs through December 30.

The eponymous exhibition is large, spilling out of the gallery confines to line hallway and vestibule with nearly 60 works spanning more than 30 years. Murphy is primarily a painter, and a variety of large-scale oil on linen or acrylic on canvas works display her explorations into genres including still life, landscape and portraiture.

However, such descriptors are drastic oversimplifications, for Murphy uses identifiable subjects as an entry point for attitudes that are variously emotional, physical, spiritual and process-oriented. The work may certainly describe the familiar in the broadest sense—a vase of flowers, a lovely woman—but the goal, ultimately, is the development of a particular visual language—a style, a syntax, a personal expression.

Continuing the metaphor, you might say that color is an active verb in Murphy’s visual vocabulary. Her palette is naturalistic—she is definitely using hues found in nature. But they seem carefully chosen to create a mood more than an accurate description.

Take one of her early florals, “Garden at Owl Creek Road,” where the palette is bold and somewhat acidic. When added to a very broad interpretation of botanical form as well as a “dry” application of paint on a rough-woven canvas, the result is a work that loosely interprets the sensation of abundance.

This painting is contrasted with a group of more recent canvases inspired by the lushness of Jamaica and other tropical climes. These works are much “juicier,” with the physicality of brushwork and intentional drips that keep the eye moving along with shifts in form, color and perspective.

Scanning the compositions, branching and foliate forms sprawl across largely decentralized compositions. While there is a sense of traditional still life arrangement as an underlying structure in “Jamaica in Miami,” for example, there is also the distinct sense of looking down, falling forward, floating above. If any works display Murphy’s exploitation of figurative abstraction, it is perhaps these.

When Murphy’s palette isn’t bright and high-keyed, it’s often pastel. Rightly or wrongly, this is often a distinctive turn for an artist, signaling a possibly negative range of connotations including softness, femininity, sexuality, or decoration.

Murphy seems unafraid of its use, employing pale pinks, greens, blue and yellows in service of airy and ethereal compositions, such as “Bird and Chalice” which, with its inherent symbolism, seems right at home at Cathedral.

As if to underscore the intentionality of her choice of “feminine colors,” Murphy adds a fairy to a woman’s portrait in “Duchenne Smile.” There’s no way to know if this represents a personal story associated with the unidentified sitter, whose inscrutable smile is more Mona Lisa than the natural, happy grin suggested by the title. The viewer is left to consider the possibility that the subject will be enlivened by a wave of a magic wand.

The large oil “Vivian Girls” continues the fairy theme in an especially oblique way. The large composition prominently features four (presumably) female figures who seem to be adorned in a variety of theatrical costumes, several with fairy wings.

The title suggests an homage to the work of outsider artist Henry Darger, whose magnum opus and extensive illustrations of a story by the same name is an exploration of the world of the unreal.

His epic follows innocent young girls as protagonists in a world scarred by child slavery and violence, but where good ultimately triumphs. Just as easily, however, these ladies could be going to a New Year’s party or the Groundhog Prom or taking part in a theater revue. Murphy leaves the interpretation as open as her sketch-like compositional manner.

The rest of the exhibition is rounded out with several other thematic groupings. A visit to China must have inspired the tall acrylic painting and five small studies of the Yangtze River Gorge.

With their strong verticality, in part a function of the waterfall at center, they channel traditional Chinese landscape paintings; their naturalistic palette of brown, green and white relate them to the 19th-century American landscape genre.

The show also contains a number of collages and an assemblage, ‘Heavy Heart,” at the gallery entrance. The use of cut papers added to the painted imagery adds layers of texture and shape that enliven many of her compositions in an appealing way.

Even so, the retrospective provides a satisfying picture of Murphy’s artistic journey to grow a visual language of experiences and aesthetics, and to cultivate figurative abstraction into a garden of abundant variety.