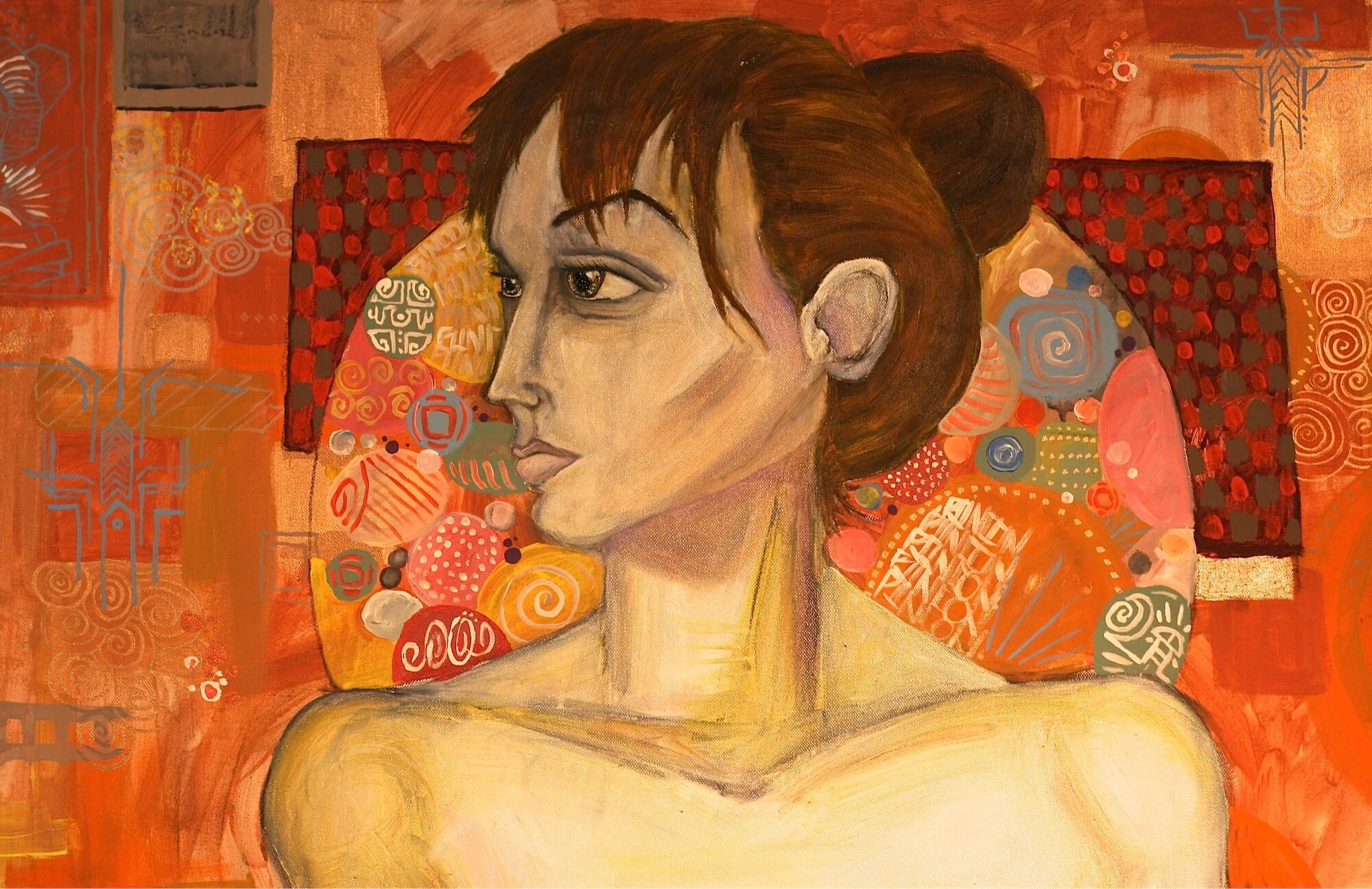 Street-influenced artist Fredy Rincon returns to the RNG Gallery with his second show, The Cards You Are Dealt, which continues until November 2. The focus here is on telling personal stories in a narrative, expressionistic style, frequently with the use of layered and translucent shapes and anchored with ink line.

Media choices range from acrylics to water color to oil, on both canvas and paper, framed under glass.  Each tells a story, many with text to elaborate on the images.

Perhaps the most accomplished works in this show are the three small pieces in black frames on the left/south wall; especially the center work, entitled “October.”  All three of these pieces show a more complex and nuanced layering of images and composition without reliance on verbiage.  This allows viewers more latitude to establish their own personal responses to the work.

The artwork that references the title of the exhibit shows a skeleton-faced figure of a woman in a shawl, with a skirt or table in the foreground featuring both positive and negative symbolic playing cards, along with added background figures.  Displayed in a giant window frame and hung vertically, this piece seems loaded with the dichotomies of good and evil.

To these eyes, the best painting in the exhibit is “Mi Amor”, shown above.  A large acrylic of the artist’s wife, Nicola, it is rendered in a Gustav Klimt-like style. Done in mostly warm colors with touches of gold leaf, this work seems a testament both to Rincon’s maturity as an artist as well as that of a responsible father and husband.

The large horizontal painting at the entrance of the show, “Outside Looking In”, might be described as the most poignant work shown, given the status of the many ethnically diverse immigrants portrayed in the media.  In acrylic and wrapped with a frame of wire fencing to symbolically hold in the figures, it shows a huge group of mostly young people representing many countries, who wish to enter the United States.

Rincon deliberately made the people of different races, as he stated that people from many other countries wish to live here.  The idea is good, but the largeness of the eyes and sameness of the composition seem to detract from the potential power of this idea, causing it to lose its impact.

Rincon was born in Los Angeles to immigrant parents from Mexico.  The family moved to Bellevue when he was 14. In his teens, he worked his way through the identity crisis often experienced by children of immigrants, by becoming involved in gang activity.

But he managed to finish high school in Bellevue, and then attended classes at Bellevue University, where his interest in art expanded.  His show of last year at this gallery may have allowed Fredy to work through that difficult time of his life. Several pieces in this show seem to move him on to a more painterly approach with his work.

Rincon’s early artwork was graffiti-inspired, perhaps inevitably, given his social milieu.  One work in this show, a horizontal, mostly green and red acrylic painting on the back left wall, is done in a graffiti-styled approach.  It was painted for this exhibit to honor his close friend, “Slick”, whose death some years ago helped redirect Fredy’s life.

Relating his experience of acting as a pallbearer for his friend’s Buddhist burial service, Rincon and his friends were asked to shave their whole heads—hair, eyebrows and beards, and don the orange robes of that religion to carry the casket. The Buddhist priest instructing this group of gang friends were asked to spend the whole day honoring Slick’s memory in meditation.

“My life changed with that experience,” he said.  Within about the same time period, Rincon also married, which helped direct his maturation to the gentle father of three children he is today.

Rincon was voted Best Emerging Artist at this year’s Omaha Entertainment and Arts Awards Banquet in February.  And currently, Nebraska Public Television is in the process of making a video interview of Fredy Rincon, which will lead to a much fuller understanding of both him and his art.

It will be interesting indeed to see what this hard working young man does with his art in the future.

The Cards You Are Dealt continues at RNG Galley, 157 West Broadway, Council Bluffs, IA, next to Dixie Quicks restaurant through Nov. 2. For more details, go to dixiequicks.com or call 712-256-4140.