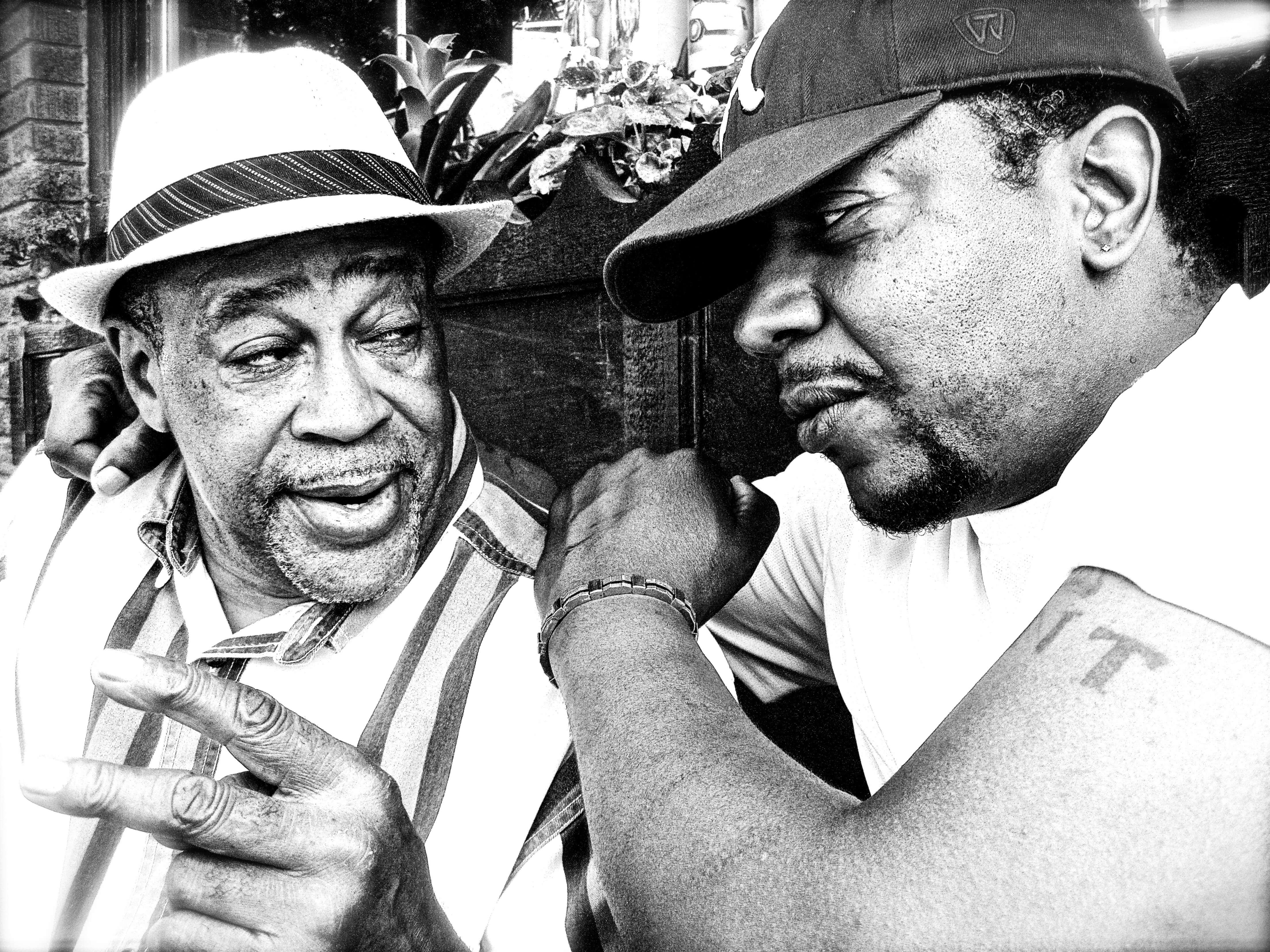 The recent exhibition of photographs by Omaha-based artist Sam Herron at the RNG Gallery in Council Bluffs offered a glimpse into a world that most of us notice only at specific public moments in our day, if at all.

Staring out at us from most of the show’s twenty-seven large-format digital images in Street Life Fragments were the faces of the homeless, sometimes steely-eyed and indignant but more often simply ravaged by the forces of addiction, mental illness, inclement weather, and neglect.

Although he is fifty-four years old and has more than a life’s worth of experiences to show for it, Herron was introduced to many of us as recently as 2013, when a group of his portraits was displayed at Creighton University’s Skutt Student Center.  The World-Herald columnist Matt Hansen wrote a profile of Herron on the occasion of the show.

Timed to coincide with National Hunger and Homelessness Awareness Week, the recent RNG show and Herron’s work in general earns some of its authenticity from the fact that Herron himself—as a result of circumstances not that far removed from what many of us have encountered over the course of our recent economic recession—has battled addiction and spent time being homeless.

This connection raises—or perhaps clarifies—issues regarding the relationship between the photographer and his subjects.  Herron has said in an interview that “it’s cathartic to see people as you’re spending time with them during the course of photographing them and connecting how it relates to your situation—past, present, and future.”

Herron spices up this catharsis by giving each work a wry title that sounds like something a really philosophical homeless person (perhaps the one in the picture?) could have said, but is more likely to have come from Allen Ginsberg, Salvador Dali, or another of Herron’s influences.

There are of course photographic influences as well:  Walker Evans, Dorothea Lange, and Daido Moriyama, to name a few.  Richard Avedon’s great series In the American West also comes to mind.  In conversation, Herron says that it was photographing the homeless that helped him access these artistic influences, rather than the other way around.

He had never felt comfortable taking portraits at all, much less portraits in the vein of these illustrious predecessors, and thus his earlier work focused on old buildings and urban textures, carried at times to the point of abstraction.

Once the path of his own life brought him into ongoing contact with the homeless population and its complicated weave of personal and socio-economic circumstances, however, he realized for the first time how to go about engaging potential photographic subjects in conversation.

This was crucial to securing their consent to being photographed.  More importantly, though, it was about Herron learning to feel comfortable interacting with his subjects in the process of determining what essence he was trying to capture with his camera, whether he managed to get fifty shots or only five.

Now that Herron has reached this level of self-knowledge in his development as an artist, he is interested in expanding in terms of both subject matter and technique.  Crucial to both is his interest in becoming more multi-media and more collaborative.  He has ideas; for instance, about creating an installation in which text fades in and out of view as the images flow by in a current shaped by the music of minimalist composer Steve Reich.

This growing interest in collaboration was hinted at in the show at RNG Gallery by the presence of one work by an artist other than Herron, the collage “I-8 Broken Machine” by recent University of Nebraska graduate Max Sheppard.  In part rumination on the American flag, the piece makes perfect sense slotted in between two works of Herron’s, both titled with quotes from Ginsberg.

Even as his artistic production evolves in these productive ways, Herron has deepened his connection to the homeless population still further by working the late shift at Siena/Francis House, a massive operation in North Downtown Omaha that routinely provides sleeping accommodations to over 500 homeless people a night, even though it has only 389 actual beds.

The ability to conjure the lurking presence of circumstances as dire of these in simple images is part of what gives great photographs their power.  It will be intriguing to watch what emerges from the alchemy of personal experience and artistic exploration in Herron’s future work.