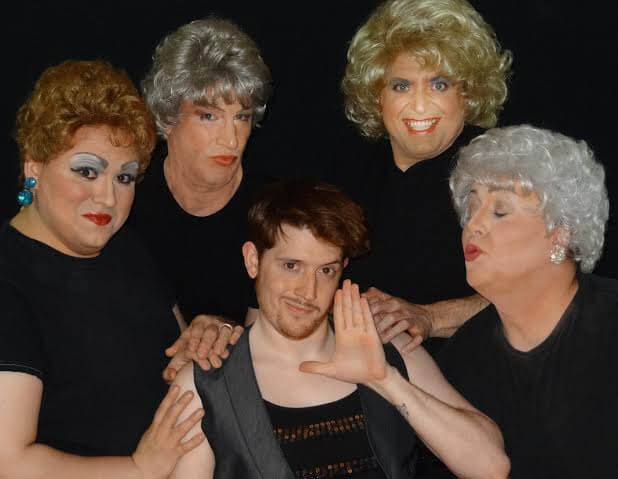 “Sumer Is Icumen In.” So goes a famed medieval English song (aka the “Cuckoo Song”) whose words are in the Wessex dialect. This summer hear and see no evil when another kind of sex takes over the stage sheltered from harm, seeded and shaded by Shelterbelt Theatre. It’s Thank You for Being a Friend, a cuckoo, deliberately gay musical.  This trip to summer camp has a book by Nick Brennan, lyrics by Luke Jones and music by Jeff Thompson. The first two hail from Falls City, not very far south from here. Thompson comes from way down yonder in New Orleans, but transplanted to Ashville NC. Their show, you could say, is pretty far out. Subtitled The Unauthorized GOLDEN GIRLS musical it doesn’t so much replicate that iconic TV multi Emmy- Award- winning TV endurer as parody and spin off it. Note the title, whose notes come from the song which was the opener for the 1985 video debuter.

In this instance the ladies, inevitably, are spending their golden years in Miami, FL. But gay superstar Ricky Martin moves in next door and hosts loud parties with his entourage. The girls are bugged. So they challenge the boys to square off against them to see who sings and dances best at the annual Shady Oaks Retirement Home Talent Show.

Brennan says the idea emerged because close friends were obsessed with the Girls and that his, Jones and Thompson’s take in “dirty, irreverent, high-camp style” has a sentimental side.  He also calls it “a tribute,” one which,as well, makes fun of gay life-styles.

Does it get so close to the original source as to have men in suits pondering lawsuits on behalf of Susan Harris and other creators of those scripts? Not so far. Parody is protected by The Constitution, Brennan claims. “And no copyrighted material is used from the original.”

FYI: The series touched on coming-out and gay marriage, so such topics are hardly new to this knock-down, drag-out put-on which convulsed Off-Broadway early last year. Earlier versions had other Off- Broadway runs, plus more than a dozen regional productions around the country, with  a London Production planned.  Shelterbelt’s is a revised version with three new songs.