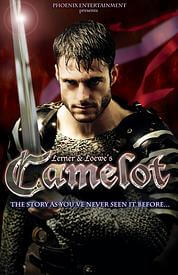 Ominous and uneven drum beats warn the audience from the outset that this Camelot will not be the cheery Julie Andrews musical they remember. A grim King Arthur confirms the notice that the old “pastel” version has been updated to a darker and grittier tale of betrayal.

But so it seems only briefly. Soon we’re back to the Camelot extolled in the title song, a place of joyful ever-aftering where the reluctant bride-to-be and the boy once known as Wart become Queen Guenevere and the idealistic Arthur.

In short, it’s fair to say that Omaha Performing Arts delivers more the traditional musical than the one threatened by the ominous drums. Mary McNulty’s Guenevere sings “The Simple Joys of Maidenhood” and then joins Adam Grabau’s Arthur in the title’s ode to a Utopian existence, and we can delay worrying about Lancelot arriving later to muck things up.

Oh, the scenic designs mods the look, with curved metal strips serving as the tree that hides Arthur from the fair maiden. And a wide swath of tapestry, rather than lots of regal detail, provides the castle setting.

But there’s more that is familiar, from the Queen mocking Tim Rogan’s Lancelot for his clueless lack of humility to the ultra-honorable Lance doing his best on the love ballad, “If Ever I Would Leave You.” He’s good enough to be spared only an occasional dowager sniffing, “You’re no Robert Goulet!”

The most unavoidable comparison must be suffered by those of us who recall Richard Burton’s command of the English tongue and hear a rather ordinary Arthur at the Orpheum. Grabau makes his King a believable Everyman, and comes close to expectations in his closing speech to young Tom Warwick, played opening night by Graham Waterstraat, 11, a 6th grader from Swanson Elementary here in Omaha.

If some comparisons are odious, as the poet said, lets at least be clear that at least two of the leads fared very well when stacked up against the memorable originals: I bow to none in my fondness for Julie Andrews, but Mary McNulty has a more amazing voice and seems too sexy to ever be cast as Mary Poppins.

And Kasidy Devlin is a devilishly delightful Mordred, the serpent in Camelot’s Garden of Eden. His was the Roddy McDowell role of yore, and Devlin is so saucily impish that one can almost forgive his corrupting antics.

Two others stood out: Kate Turner quite briefly as the enchantress Nimue singing “Follow Me,” and quite consistently Mark Poppleton as the wizard Merlyn and then the affable King Pellinore. One of the highlights that seemed cut too short was Arthur singing, “How to Handle a Woman,” but Grabau was given fuller opportunity with two other favorites: “I Wonder What the King is  Doing Tonight” and “What Do the Simple Folk Do?”

My recollection of the Omaha Community Playhouse 1979 treatment of “The Jousts,” when Lancelot bests three knights, is too vague to summon, but this version wasn’t very impressive with the ensemble suggesting a rougher version of the swells at Ascot in My Fair Lady.

There’s more than enough to enjoy in this touring Camelot to both satisfy traditionalists and intrigue those seeking innovation.  Guenevere alone was good enough to balance out the  shortcomings.