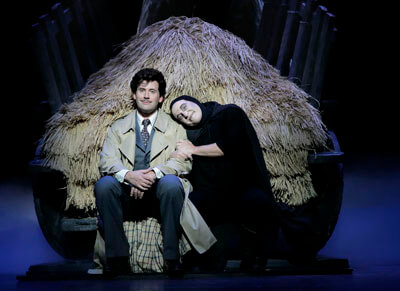 It gave new meaning to March Madness when the little guy and the big guy in the crowd at the Duke game turned out to be Igor and the Monster from the Mel Brooks musical Young Frankenstein. Of course Igor (Cory English) wasn’t wearing his hunchback and the Monster wasn’t greenish with the zipper in his neck. For Preston Truman Boyd, a 6-foot-3 Minnesotan, it was an afternoon of basketball instead of his usual daily round of golf. But they found themselves in Charlotte, N.C., before their arrival in Omaha next week, so Boyd and his smaller buddy, who originated the Igor role on Broadway, took time for NCAA hoops. As the Monster, Boyd doesn’t need to arrive at the theater until a half-hour before the opening curtain because he “comes to life” late in act one. He spends an hour and 15 minutes getting made up with the zipper, scars and “the Peter Boyle hair style,” referring to the film version with Boyle as the creation of Gene Wilder’s Dr. Frankenstein, aided by bug-eyed Marty Feldman as Igor. (Igor’s the reason I’m staring over my keyboard at a gray faux brain labeled “Abby Normal,” a name drawn from the little brain snatcher’s confusion over “abnormal.”) Boyd understudied the original Monster, whose inarticulate grunts and moans were inspired by his toddler “trying to make sounds whenever he wanted something.” The character’s triumphant moment, as the promos remind fans of the movie, comes when he manages to utter, “Puttin’ on the ritz.” But that’s as close as Boyd comes to showing the vocal prowess that landed him the role of Jean Valjean in his high school production of Les Miserables. That was in Moorhead, across the Minnesota border from Fargo, N.D. His grandfather sang at the Met and in Italy, then taught voice at Concordia College in Moorhead, where his parents now teach. They don’t sound like those average Minnesotans Garrison Keillor talked about, but Preston comes closer to the stereotype when you learn that hockey competed with theater in his high school years. “I played center and a couple of junior teams checked me out.” But theater won. He took the advice of a classmate who left Moorhead for New York City, and studied at the University of Cincinnati Conservatory of Music. He played the Pirate King there in Pirates of Penzance, but his favorite role was the male lead in Pajama Game, singing such songs as “Hey, There.” He’s also performed in musical theater in St. Louis and Kansas City’s Starlight Theatre. Touring separates him from his “serious” girlfriend, who has a role in the blues musical Memphis back in New York City. But it allows daylight hours for his golf and other outdoor activities. He particularly enjoyed stops in Denver, where he headed out for some white water rafting, and Arizona where he indulged in more golf to work on his “7 or 8 handicap” game. He also comes from a skiing family, a sport that gained momentum when his grandfather taught in Boulder. He’s not tempted, however, to try the slopes in his Monster gear. It includes a big muscle suit and giant leather boots with four-inch lifts. With four layers of clothing, his appearance on stage for almost the entire second act constitutes a good workout. The layers come in handy when he bursts through the wall of the blind hermit’s hut. That’s the scene when the blind man pours hot soup in his lap and sets fire to him. While his “Puttin’ on the ritz” song-and-dance may be more oft-remembered, some would argue that the great climax comes when Elizabeth (think Madeline Kahn in the movie) is so inspired by his prowess that she bursts into an orgasmic, “Ah, sweet mystery of life.” It could spoil a fellow for less enthusiastic responses to his charms. In any case, Boyd must play his role without such freedom of expression. The tour stop isn’t his first in Omaha. Boyd has visited a high school friend who teaches grade school here. Young Frankenstein runs March 29-April 4 at 7:30 p.m. Tuesday-Thursday, 8 p.m. Friday and Saturday, and 2 p.m. Saturday and Sunday, with a final performance 7:30 p.m. Sunday at the Orpheum Theater, 409 S. 16th St., as part of Omaha Performing Arts Broadway Across America series. Tickets, beginning at $25, are available at the Holland Performing Arts Center, online at ticketomaha.com or by calling 402.345.0606.