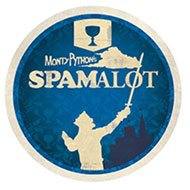 “There’s simply not a more congenial spot, for happily-ever-aftering than Camelot.” They dine well there, eat ham and jam and spam a lot. As does Lancelot. (Apologies to Frederick Loewe.)

I say! How did Spam get into Camelot? Did they serve canned meat at the Round Table? Certainly they had can openers. To get out of their armor. But Armour foods had nothing to do with that ham by- product. That was Hormel.

Forsooth. Let’s get down to the real meat of the matter before you embark on your quest to discover hilarity at Omaha Community Playhouse. Monty Python’s Eric Idle transformed the 1975 movie Monty Python and the Holy Grail into this 2005 triple-Tony Award winning musical. FYIs: Song co-writer John Du Prez has written music for lots of movies including the Teenage Mutant Turtles series. The other co-writer, Neil Innes, was long a member of The Bonzo Dog Band and was one of the rock band The Rutles. (“I’ve suffered for my music; now it’s your turn,” he said)  http://en.wikipedia.org/wiki/John_Du_Prez- &  http://en.wikipedia.org/wiki/Neil_Innes

Along the way, as horseless Arthur stumbles on his spurs, there are send-ups of Fiddler on the Roof, West Side Story, Man of La Mancha, Les Misérables; Sondheim’s Company, Mel Brooks’ The Producers and plus a shot at Andrew Lloyd Webber’s canon.

Python lovers, who never get enough of such stuff, may recognize snips and snaps of such indelibles as the Ministry of Silly Walks, the Dead Parrot Sketch, the Lumberjack Song, the Fisch Schlapping Song and “Always Look on the Bright Side of Life” where Brian formerly hung out with a cross.