Home » Art » Literary » Theatre magic for all ages at The Rose. 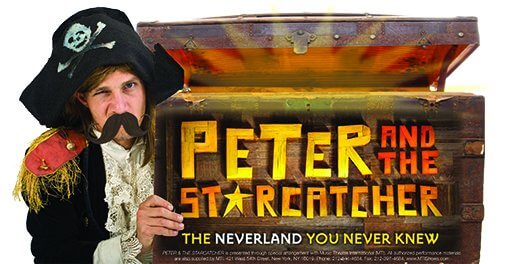 The Rose has risen to the occasion. It offers a superbly staged, colorful production of a charmingly original, often comic 2012 Broadway hit, Peter and The Starcatcher. During this seasonal time of celebration, this delightful package should appeal to people of all ages, especially those who harbor fond memories of J.M Barrie’s Peter Pan. Credit director Matt Gutschick, scenic designer Adam Rowe and costume designer Sherri Geerdes plus a talented 17 member cast for making it work so well.

This comes loaded with laughs of many kinds, verbal and visual, spiked by anachronisms and nutty  kid-type humor, with a few Monty-Python-like twists and a touch of The Three Stooges. Even little kids in the audience are bound to laugh, while adults can readily catch much of the other stuff swiftly flying by.

The first act takes a while to get off the ground, with expository talk, but eventually it gets fully under sail, billowing and flying with action and charm. And, by the time the second act emerges, the remarkable cast, doubling and tripling into 27 characters has become an ensemble worth cheering, amid non-stop imaginative visual effects.

As you may know, this is a back-story look at the emergence of an initially lost English lad who didn’t want to grow up, showing how he found himself as Peter Pan. Rick Elice wrote the script based on the same titled book by Dave Barry and Ridley Peterson, supplemented with a few songs by Wayne Barker.

In around two hours the complex story unfolds in which an orphan, the “Boy”, has adventures on the high seas, along the way encountering an equivalent but resourceful teen, Molly, whose mission is to preserve magical starstuff. They and two other orphans plus Molly’s nanny sail on the not-really-all-that-good ship Never Land captained by nasty Bill Slank. It is boarded by a bunch of slimy, sneaky, snarky, stinky pirates lead by much-feared, facially haired Black Stache (a distant cousin of Blackbeard) aided and abetted by his yay-sayer Smee.  “Boy”, now renamed Peter, manages to swim to mermaid-decorated Mollusk Island where he encounters jabbering, language-challenged natives bearing heaps of grudges against the English. Stache meanwhile has his frizzy nose to the ground and pursues Peter and Molly. Dangers and brawls ensue. Molly goes home. Peter remains.

Elice, Barry and Peterson have planted many origin elements of Barrie’s story: a ticking clock, a ravenous crocodile, flying fairy Tinkerbell and, of course, Captain Hook.

Director Gutschick keeps all the action moving energetically, full of fun while making sure that Peter’s side of the story come across earnestly rather than comically. Gutschick has welded the large and diverse group of performers into an impressive example of versatility. Rowe has created many exceptional, imaginative sets, including two ships and a clinging jungle, while never aiming to be too literal, consistent with the script’s deliberate aim at theatricality. Peter’s tale, after all, is fundamentally fantasy.  Geerdes has produced a charming array of wardrobes while Barker wrote a truly cute song for the Mermaids, complete with a ukulele suggesting, as do grass skirts, that it would not be inappropriate to say “aloha” (or, in Mollusk-talk, “Tiramisu.”).

On preview night, Bill Grennan played the leading role of Black Stache full of comic energy, suggesting that that pirate keeps hoping to be menacing, but always goofs up. He didn’t delve into more traditional playing, sending-up the sinister side of the character. As Boy/Peter Joshua Lloyd Parker never seemed like an awkward kid on the verge of adolescence. He and Bethany Bresnahan’s Molly stayed more generic than specific, with Bresnahan given to unintelligibly shouting lines into her body mike.  Vincent Carlson-Brown’s take on Bill Slank had great presence and definition. Equally distinct, Kevin Ehrhart gave Smee memorably amusing personality. Plus Fighting Prawn, the leader of the Mollusks, was played by Zach Kloppenberg with marvelous goofiness. In supporting roles Marguerite Bennett and Patrick Wolfe as the nanny and Molly’s father had sincere substance, never yielding to overplaying. (Full disclosure: I’ve performed in plays directed by Carlson-Brown and Grennan is one of my editors at The Reader.)

Dave Barry had a major hand in coming up with this idea. You know Dave, the newspaper columnist and author of a multitude of books including Babies and Other Hazards of Sex: How to Make a Tiny Person in Only 9 Months With Tools You Probably Have Around the Home. He and Ridley Pearson wrote a bunch of books about Peter. Pearson’s also turned out thrillers for adults and children, some set in Disney parks. http://www.davebarry.com/ -http://ridleypearson.com/

Rick Elice transformed such pages into a play. He’s got major theatre credits. With Marshall Brickman winning a Tony for writing Jersey Boys, a legend on Broadway where they had another musical hit, The Addams Family which had a healthy 20 month run. https://en.wikipedia.org/wiki/Rick_Elice

Speaking of Tonys, Peter and the Starcatcher garnered five as well as 11 record-breaking nominations.

So go where dreams are born and time is so well planned. Think of happy things and your heart will fly on wings.