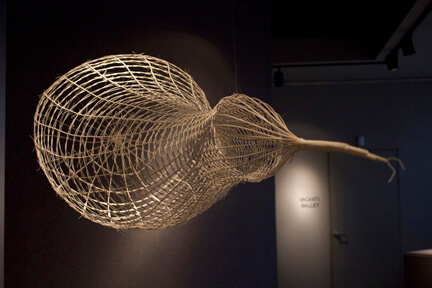 When the 7th annual OEAA showcase convenes Feb. 17 at the Hilton Omaha, winners in two categories will not only accept their awards, they will once again strut their stuff upon the stage.

It’s an advantage that theater and music nominees of an Omaha Entertainment and Arts award have always had. Performing before a live audience of family, fans and friends is what they do. They do it well enough to convince even their critics and peers that their nomination was justified. Win or not, it’s an honor just to share the spotlight once again.

For the third component of OEAA, the Visual Arts nominees, recognition comes harder. There are fewer categories, only seven to music’s 15 and theater’s 25 and little opportunity for artwork to be seen awards night. What’s a poor artist to do, starving for attention?

Until it’s possible to display the work of each visual arts nominee onsite before, during and after the OEAA celebration, artists must resort to an offsite exhibit of their own. While it seems reasonable and possible to organize such an exhibition onsite and time specific to the event, particularly at such an art conscious venue as the Hilton Omaha, it awaits its debut.

The good news is that the Hot Shops Art Center has once again opened its doors to this year’s visual arts nominee show, and in the opinion of this writer, it’s the best in OEAA’s history. Not because the year of eligibility produced the best art ever. It did not. And not because the work on display is that much better than some individual pieces seen in previous shows. This year’s exhibit will rock your world because with one or two exceptions, the nominees brought it, their best work that is, and demonstrated with pride why they and their shows deserved nomination.

Even better, of the 30 or so nominees, 27 participated in this eclectic survey in the 1301 Gallery space. That includes new media as well as traditional such as video from Michael Burton and Joe Pankowski and archival material from performance art group aetherplough. Also notable is the non-traditional sculptural work from Susan Knight, Paul Konchagulian and Tom Swanson. Ironically, the only photograph in this exhibit is Mary Day’s image of her notable show, Turning: Reed Sculpture and Drawings at the Sunderland Gallery. Especially ironic given that no photography show per se was nominated in any category.

Best of all, several artists not only delivered the goods, so to speak, they stuck around for the show’s preparation and hanging. This was particularly true for such as Knight and Day (couldn’t resist-now there’s a show opportunity waiting to happen considering a shared aesthetic but different vision), Troy Muller, Mike Tegland, Pankowski, Eddith Buis and especially Caleb Coppock who built a beautiful wall installation on behalf of his nominated group show, Breathing Room.

Their intervention was especially helpful to Rob Gilmer, chairman of the Visual Arts nominating committee given the responsibility for each show. Recuperating from a knee replacement, Gilmer, with the help of the attending artists, can take credit for the curatorial display that lends the exhibit its professionalism and credibility. Lighting is effective, each piece is showcased in its own space, sightlines are good, and certain pieces enjoy a conversation such the juxtaposition of Ying Zhu’s delicate shadow boxes and Tegland’s dark “relief carvings” with each artist’s signature surface, texture and palette.

The arts nominee show’s opening was a huge success due in no small part to a shared audience with Pot Luck: Interpretations of Mozart’s The Magic Flute and Bartok’s Bluebeard’s Castle, next door  smartly curated by participating artist Paula Wallace. All told, the exhibit represents the best art shows of a year long period. According to whom? Why, you of course initially. That is, if you bothered to vote for the best or favorite artist and show during the eligibility period. And if your nomination was legitimate according to the qualifications established by OEAA.

Determining the latter is the purview of the Visual Arts nominating committee as well as providing OEAA with a list of 5 or 6 nominees for a final vote. People may nominate anyone in each category as long as it was a legit show in a real arts venue in the Metro area. Coffee houses, bars and lounges, studios and boutiques and their ilk do not qualify unless they provide a designated gallery space with a regular schedule of exhibits up for at least one week. Eligible shows must have opened sometime between and including Sept. 1 of a given year (2011) and Aug. 31 of the next (2012). But history shows that vox populi leaves a lot to be desired.

“Most of the exhibitions and artists nominated through popular vote have been bogus, “ said Larry Ferguson, artist and member of the nominating committee. “That’s why we have to carefully go through it all to try and find valid nominees. Either the shows are in the wrong type of venue or the nominees aren’t really visual artists.”

Once the choices have been validated, the committee includes at least the people’s top vote getter in each category and adds them to its own list for a total of up to five or six nominees. The key to this list is having a committee with a broad background and connection to visual arts, willing to make the time and effort necessary to cover the annual arts scene.

“The visual arts committee is connected by a strong interest in contemporary local art,” Gilmer said. “The members are artists, collectors, curators, scholars, instructors and writers, all with different views. We may agree or disagree about our choices but we see virtually all the shows sometime during the given time period of eligibility.”

To avoid conflicts of interest, the evolving committee which consists presently of Gilmer, Ferguson, Eddith Buis, Steve Carter, Laura and John Vranes, Janet Farber and full disclosure, myself, will be limited to two artists. Even then, every effort will be made to include only those with a broader connection to the Metro arts. For example, Gilmer is a venue owner (RNG Gallery) and member of a public arts commission, Ferguson, the chair of Omaha’s Public Art Commission and Buis is a long-time instructor and community arts project organizer in the Metro area. Even then, artists will routinely recuse themselves from the nominating process if directly involved with a given art show.

After this process the list of nominees is sent to a larger voting academy of 30 or so individual members in the arts community that along with the visual arts committee will vote for the winner in each category in a secret ballot. Although picking a winner is subjective, the nomination process is based upon criteria that includes vision, creativity, unity and professionalism and all that implies. All shows and artists under consideration are scrutinized accordingly and nominees are picked by committee consensus or silent votes.

“We respect the art and the artists we see and discuss,” Gilmer said. “We take on this task with full commitment and do not treat it lightly. The visual arts show at Hot Shops reflects this. The response opening night contained many accolades. All the work shown reflects the best in the year’s best of shows.”

Judge for yourself while the show remains up in January. Whether they win in their respective category, the following work in no particular order made a lasting impression on this reviewer:

2. Playing Ying to her Yang, is Tegland’s finely etched drawing of an undersea world, “Blue Tuna”  on a dark panel that presents his own formal and abstract vision of Nature.

3. Also catering to the natural world is group show Breathing Room which features an array of flotsam and jetsam and delicate drawings from Coppock, Daphne Eck, Bethany Kalk, Cale Oglesby and Cora Rasp.

4. “Ancient Knowledge Not Learned” is a display of six textural, abstract panels from Eliska Greenspoon that walk a fine line between coral formations and contemporary bathroom tile.

5. Speaking of fine lines, we have an exquisite cut paper sculpture of Heidi Bartlett, “Victoria” whose creamy white aesthetic references a seacoast cottage and its Cape Cod barrier fence in relief or a whale-bone corset.

6. James Freeman’s expressionistic “Sock Monkey and Scarecrow: Just Chatting,” may strike some as derivative or mere caricature, but these two visages of his signature clown motif represent two sides of an Artist: forlorn and melancholy and scary and terrified.

7. One of only a few local artists exploring socio-political themes, Troy Muller challenges the viewer with one of his imposing gilt-framed altar pieces, “Wonders of the Deep,” that satirizes genetic manipulation in the name of progress with such painted aberrations as Kodak-Octopus and Coffee pot-Seahorse.

8. Amy Morin and Rob Quinn offer two sculptural variations of their own fantasy-melancholy group show, Crush, that comment on rites of passage: her sewn and stuffed, discarded animal dolls and his edgier, ceramic child-like figures and monsters that gaze upward feeling abandoned like those in Where the Wild Things Are.

10. In a similar vein as Burton’s video but more ironic and abstract is Kim Reid Kuhn’s “Amusement,” a cataclysmic culture clash of Pokemon and Pac-Man figures with predatory single cell amoebas in a garish graffiti palette of Pepto-Bismol pink, blue, red, black and white.