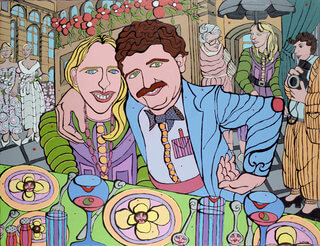 This quote is never really explained as it opens Lynn Piper’s artist statement on behalf of her current exhibit at Modern Arts Midtown. The text was found lying on a table in the rear spaces of MAM surrounded with paintings and other objects created by Piper in preparation for her solo exhibition that opened Mar. 7. Though her own expressionistic style differs from the master’s more gestural and florid aesthetic, Piper’s emotional connection runs just as deeply.

Titled The Joy of Painting (sadly, it is only coincidence that the show shares names with the late artist Bob Ross’s long-running public television program), the exhibition is one in just a handful of solo shows by an Omaha staple who has become just as well known for certain events and accomplishments as her artworks.

A couple of them speak of the artist’s apprehension by police for after being reported for singing to the local birds. And only one of them just so happens to take two sentences to describe one of her paintings before diving back into describing the anomaly that is the focus of this article. It is a difficult task to write about an artist’s work when the artist herself is equally as interesting as her prints, but it is what the rest of this article will attempt to direct its focus on.

According to MAM owner Larry Roots, Piper has been due this exhibition for years and has been on the gallerist’s radar for even longer, stretching back to before Roots moved his entire operation from Lincoln to Omaha. It was at that time that many fresh and largely unseen faces began to show on MAM’s gallery walls signaling a partial changing of the guards from mostly over-shown mid-to-late-career artists to a series of new voices in the Omaha commercial gallery scene. Piper’s exhibition feels like an exclamation point on this movement.

It is safe to say that most of the works featured in this exhibit come from Piper’s recollection of actual events. Again, in her statement, Piper eludes to her works acting as a sort of therapy, allowing her art to take “painful subject matter and turn it into joy and whimsy”.

The situations Piper has chosen to share with the viewer in all their awkward glory are coupled with an electric pastel palette and give just enough info to create a wince or two of bittersweet discomfort. This is apparent in a pair of paintings, “Thinking about going to church,” which features a crowd of pig-nosed figures leaning backwards (or being pulled) toward a church full of worshippers and “Thinking about staying in church,” which consists of a vaulted ceiling-scape anchored by pewed church-goers, the last of which looks to be making a quiet, elated exit.

Equally discomforting is “Thinking about the man who ate the toucan.” Set in a living room, a young man in a green suit sits in one of two identical armchairs; the other is vacant. At the man’s feet a shark swims on the carpet trailing a clown fish who is following a third fish. Though the title tells us he is about to eat a toucan perched in a painting behind him, his all too comfortable smile suggests that he has a much larger prey in mind as he stares at the viewer.

Nearly all of the fifteen or so paintings in the exhibition take the viewer from moment to odd moment, all containing multiple styles, techniques and approaches. Only two paintings in the group fall short of the bar set by the artist’s other works: one featuring a woman in an overstuffed chair and the other of a woman in the bath. Both have a level of unfinished causing them to stand out against the group and lack Piper’s standard offbeat activity.

Standouts of a different sort are three wooden boxes on pedestals containing multiple painted river rocks featuring flowers, butterflies and ornate patterns. What is surprising is the artist’s more widely known looser style and humor is replaced with a nearly unbelievable amount of detail.

Stems and blades of grass barely thicker than a single brush bristle cover each rock, most are under two inches across and their palettes are as complex as the large paintings surrounding them. Presenting the rocks alongside Piper’s more whimsical paintings adds another layer to the experience of this exhibition as they show the artist is not only capable of capturing and painting surreal moments but also has a highly refined dexterity and a mind-numbing attention to detail.

Piper also chose to hang multiple lampshades printed with images lifted from the artist’s previous works. Though they don’t add much to the exhibition and are an odd item for an artist to have made, the shades do not hurt either. The hang just above the painted rocks and simply give the viewer an opportunity to look in on another one of her artistic layers.

The exhibition on the whole is a win for both Piper and the gallery as it highlights the seemingly endless talent of an Omaha artist whose life and personality are memorable just as much, if not more, than her art. Yet, just as Piper and her life stand out against the normal day-to-day, so do her artwork and the wide spectrum of her unusual talent.

The Joy of Painting by Lynn Piper continues through March at Modern Arts Midtown, 3615 Dodge St. For details go to modernartsmidtown.com or call 402-502-8737.