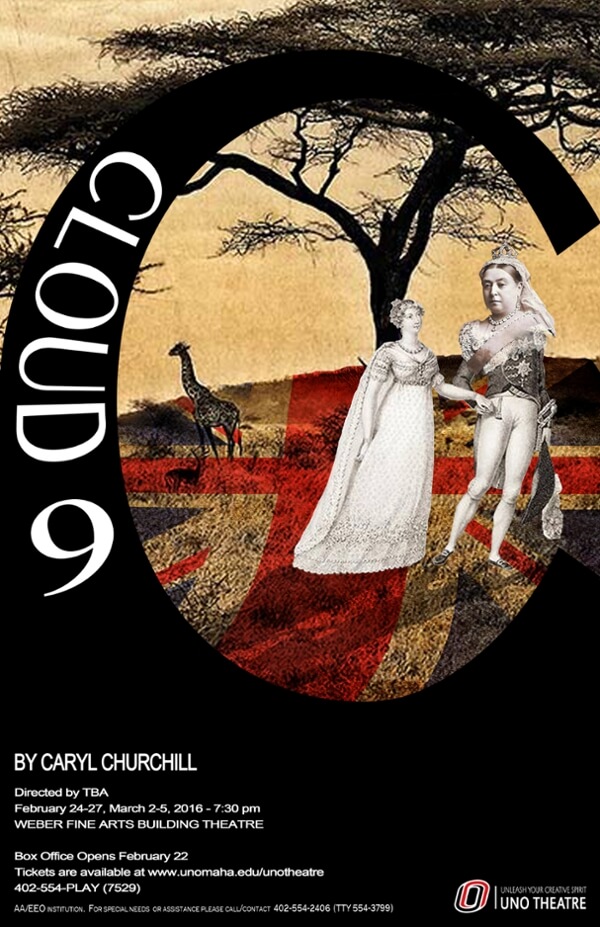 Cloud 9, Caryl Churchill’s controversial comedy is on the near horizon. It appears at UNO. It arrives full of provocative portrayals of sexuality, obscene dialogue and rains down icy hail on colonialism, social norms and conventions. Call it a farcical.  Call it fanciful.

This play has been hovering over stages for 35 years but can still stir passions. Identity issues which she raises, out-of-mainstream life choices and so on would, by now, seem to be so much a part today’s day- to- day that Churchill’s take on what seems like long ago would be outdated. Same-sex relationships, transgendering, closing the closet. Hey. What else is new?

Yet, evidently, her P. O. V. stays timeless. In 2016, concerning how we define ourselves and our social status by what we do in bed when not sleeping, her 1979 could feel not like yesterday but today.

Late last year the New York Times praised a new production calling Ms. Churchill “one of the wisest and bravest playwrights on the planet.” Adding, “few writers have come closer to making sense of the hormonal urges that rule, transport and disrupt our lives” bringing forth “the ecstasy, tragedy and exhilarating madness of what it means to be part of this eternal ball of confusion.”

Two acts counterpoint each other. The first is set in British colonial Africa, Victorian era. The second, modern times in London. First, there’s a gender-bending satirical parody of standard comedies. Then the next part lays into what can happen when society’s and theatre’s parameters are tossed aside, an urban search for identity in an ever-changing world.

To add to deliberate mixing-up, performers take on different roles, even though the characters are the same across time. Keep your program notes handy; you may not be able to tell the players without a score card.

Brecht-inspired Churchill won an Obie Award for this in 1981 and the following year for Top Girls. Her 1987 play Serious Money garnered other kinds. Vinegar Tom, Mad Forest and A Number number among what else she’s written.

There’s a student cast in this very adult experience. Mature audiences are advised to ponder understanding.