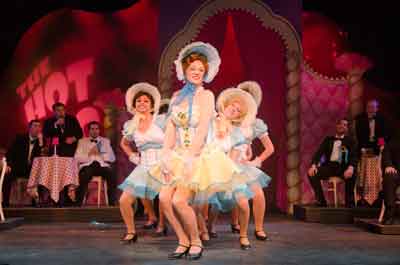 Pahdon my Runyonese, but what is a poysun ta do when woyds cannot adequately anticipate the prospect of the thoyd run of Guys and Dolls at the Omaha Community Playhouse? I posed my problem to Susie Baer Collins, who directs the musical comedy, confessing that I’ve longed for its return since seeing it first in the 1960s, then the 1980s. It dates back even further, to 1950, but when it was revived on Broadway in 1992 to rave reviews and sold-out houses I couldn’t get tickets. It held up so well that “nobody touched the book or rewrote any of it,” explains Collins, who “was blown away by it.” Thanks to Abe Burrows’ book drawn from Damon Runyon’s characters, she’ll also add no new gimmicks because “there’s no place where it needs improvement.” She has music director Jim Boggess conducting the Frank Loesser score, ranging from Nicely-Nicely (Noel Larrieu) singing “Sit Down, You’re Rocking the Boat,” to Sky Masterson (newcomer Seth Shirley) crooning, “My Time of Day.” Susie wasn’t sure she’d find the right man for the role, “Then Sky walked in the door. Seth has that Harry Connick quality.” However, “If you don’t have Adelaide, you don’t have a show,” she notes. So she found a young woman she describes as “a significant performer.” For Kirstin Kluver, the director promises, “This is her role of a lifetime.” And that’s saying a lot for a talent most recently displayed in the Blue Barn play by Edward Albee, Three Tall Women. The Creighton University grad first seen at the Playhouse as the prize virgin in A Funny Thing Happened on the Way to the Forum understands that some of her early roles might have stressed visual appeal over acting. Her first Playhouse lead was the title role in the musical Gypsy, but she soon took grittier parts and her Albee role “gave me a little more ambition for what I could tackle.” Now she must capture the essence of Runyonese, that special low-brow Brooklyn dialect, an over-articulated jargon which shuns contractions but drops the letter “r” from the likes of words and person. Collins and the cast held dialect sessions to work on such speeches as gambler Sky Masterson’s advice from his father: “If a man offers to bet you that the jack of spades will jump out of the deck and spit ciduh in your ea-ah, do not accept that wayjuh. For as shu-wah as anything, you’ll lose the bet and have an ea-ah full of ciduh.” Sky, of course, bets Sarah Brown, his Salvation Army sweetheart, to win a date. He promises to deliver 12 sinners to the Save-a-Soul Mission, where Nicely-Nicely warns about rocking the boat. Ms. Kluver’s character provides the most popular dose of Runyon’s Brooklynese when she sings “Adelaide’s Lament.” That’s where she describes the neurosis caused by an overly-long engagement: “In othuh woyds, just waiting around fuh that plain little band of gold, a poysun could develop a cold.” Her slow-to-marry friend, Nathan Detroit, is played by Jonathan Hickerson, who shared a wonderful cabaret show, The World Goes Round, with Kluver last summer. If your memories feature the film version, Frank Sinatra played Nathan opposite Marlon Brando’s Sky Masterson. Kirstin considered herself “really shy growing up.” She started more as a dancer, “a chorus girl,” then was advised at Creighton by legendary actors Bill Hutson, and began taking voice lessons. She played in Sheridan’s The Rivals at the university and did Babes in Arms during a stay in Los Angeles. On her return to Omaha, she earned a role in Thoroughly Modern Millie at the Playhouse and “learned a lot observing Jill Anderson,” the star of that musical. Now she’ll be leading the Hot Box Dolls singing “Bushel and a Peck” and “Take Back Your Mink” (and poyls cuz I’m not one of those goyls). Designer Georgiann Regan will dress her in six outfits, including “a fantastic lavender suit with polka dot lining.” That fits in with the full array by Regan and designer Jim Othuse, “everything brightly-colored, larger than life.” Expect lots of Broadway lights with New York City signs from 1950, with set pieces sliding smoothly on and off stage on four hydraulic wagons. It promises to make up for my disappointment in 1992, when even a friend performing then on Broadway couldn’t come up with two seats for that revival. Guys and Dolls runs May 27-June 26 on the Howard and Rhonda Hawks Mainstage at the Omaha Community Playhouse, 69th and Cass Streets, at 7:30 p.m. Wednesday-Saturday, 2 and 6:30 p.m. Sunday. Tickets are $40, $24 for students. Call 402.553.0800 or visit omahaplayhouse.org.