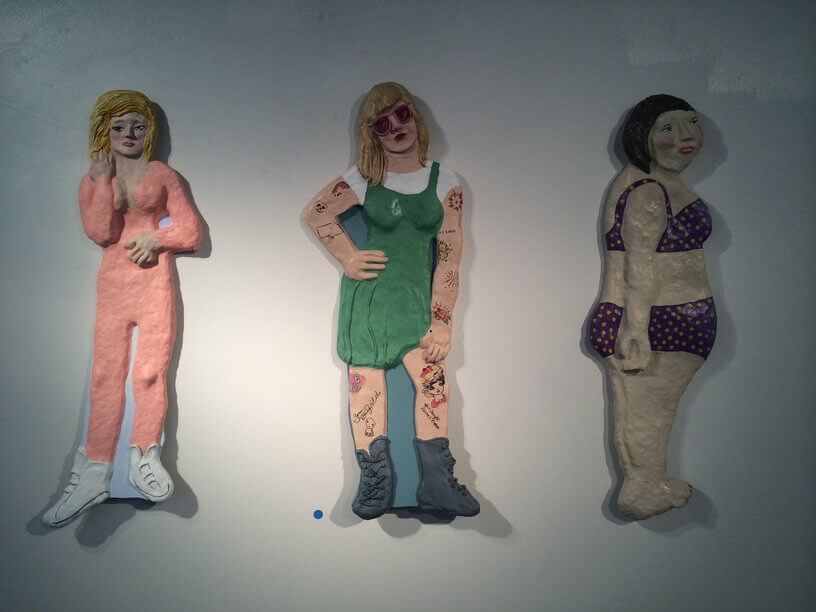 When life hands you lemons, make lemonade. When a Costco dumpster hands you a fairly large amount clear mannequin torsos…

Organizing a group show can be difficult, even a three-person exhibition. Add in a fairly specific theme for the work to follow and the exhibition has been set off on a path towards the dangerous waters of making the show harder on the artists than it should be.

Top it off with a repeated form to be used by the artists- clear mannequin torsos – and you end up with a recipe for the stuff bad art shows raising money for church coffee shops are made of, which is what I expected to see when I visited RNG Gallery to see the new exhibition ALL THE RAGE: Fashion Provocation. I was a little disappointed.

This is not to say that every single work in the show works, but given the conceptual and physical limitations placed on a large majority of the work, it is surprising that quite a bit of it actually does. Featuring three Omaha ladies who are each Omaha art powerhouses on their own, Eliška Mörsel Greenspoon, Bonnie O’Connell and Eddith Buis, RAGE in its essence quickly jumps back and forth between two major veins: tributes honoring fashion/cultural leaders and works putting popular ideas concerning what a woman is and should look like on trial.

Greenspoon is the obvious head of the exhibition though it is obvious that ideas and materials were bounced around between the three during the creation of the show’s work. She has the most work shown and quite a few of them are located in what could be considered places of prominence in RNG’s multi-cornered/hallway space. Easily the most arresting piece on a regional level by Greenspoon is “Homage to Wanda”, a mannequin form dedicated to late Omaha artist and leader, Wanda Ewing.

Featuring a natural, nude female form in the blacked-out silhouette style used by Ewing herself, and flocked with wild hair- both drapes and carpet – and surrounded by plastic butterflies and carnations, the background is stenciled with black roses backed in a fade of red to yellow creating a pattern something like the coat of a predatory cat.

The piece instantly reminds one of this past winter and the loss of one of Omaha’s most talented artists. The silhouette painted within the shape of the mannequin seems to say that though she is gone, there are still pieces of Wanda in every maker and doer in Omaha, especially the women who do so in the community including Greenspoon herself. It is a fine tribute.

Where most of Greenspoon’s work is based off a similar canvas, O’Connell’s contributions to the show take on multiple forms, some following suit with adornments to female figures, some moving back towards more traditional two-dimensional mixed media works. One undeniable element in every one of her pieces is the meticulous, refined craft used.

At her best, O’Connell creates saucy, battle-worthy wearables made from such household items as playing cards, key rings and Bibles, each one buzzing with tedium and loaded materials. Where her works falls a little shorter are the 2-D wall pieces that mostly seem to be inspired by specific quotes. The work itself is nothing to sneeze at but it feels like the artist was unable to let them stand alone, without including the words themselves, which then proceed to dominate the canvas. Once again there is no denying the artist’s talent, it just feels like much of the work could benefit from a “less is more” treatment.

The real surprise came in the form of Omaha art matriarch Eddith Buis. With a small handful of works contributed, she steals the show.  Three of the works, hung as a trio, are the strongest pieces in the exhibition by a single artist. Titled “Becoming Barbie”, “21st Century American Beauty” and “Telling It Like It Is”, they are roughly 1/3 scale female figures each dealing with themselves and their body in different ways.

“Barbie” has gone under the knife one too many times resulting in a low-cut unitard wearing cartoon of what modern culture says men want women to look like. “Beauty” is a 20-something tattooed hipster letting her natural beauty and freak flag fly. The third in the group, “Telling It Like It Is” is a soft, simple woman in a sort of muumuu with a sad sort of contentment in her face.

Each of the women is facing the same world and has found a way to be comfortable in it, and the piece as a whole gives us the chance to judge, empathize, cheer – whatever we need to feel comfortable as well.

Another work by Buis, “Lupida in Training” features a reclaimed, grey mannequin seated on the floor in a matching grey dress. The knee of the figure is raised just enough to take the hem of the dress with it coaxing the viewer not to investigate the delicate lace of the dress or the slightly disturbing Metropolis-like face, but to move to just the right spot to get a peak under the dress which reveals exactly what should be expected and exactly what every other mannequin has, a wholly un-lifelike plastic crotch. The entire experience is delightfully embarrassing.

One other work that deserves a good mention is credited by all three artists. Titled “Boobie Trap: You Can Never Trust Size”, it is made of three rows of fifteen clear mannequin torsos strung together like popcorn at Christmas. Its total simplicity is a welcome break from the shouting coming from the rest of the exhibition.

Each torso bears a small candy colored sticker displaying the size of blouse it was intended to model, and with each size increase is simply a little less plastic cut out of the form which started identical to its neighbor. Though it seems like this was just a good use of leftover blank canvases by the trio, it also best represents the show’s concept. My only complaint is that this breath of fresh air was hung in a far alcove in the gallery and would have been better served holding its own on a main wall as focal point.

Is ALL THE RAGE: Fashion Provocation groundbreaking? No. But it is saying a lot that is worth saying and falling on ears that need to hear it…and see it.

All THE RAGE: Fashion Provocation continues this week only at RNG Gallery, 157 West Broadway. For details and hours, go to dixiequicks.com or call 712-256-4140.