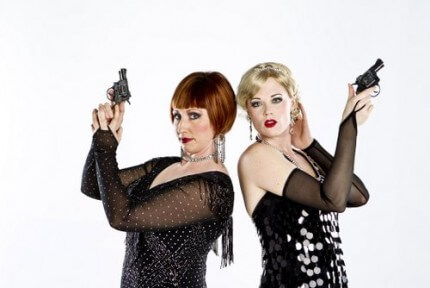 A star was born when Kirstin Kluver played Adelaide last spring in the Omaha Community Playhouse musical Guys and Dolls. She’s back as Roxie Hart in Chicago and sharing top billing with two long-proven performers, Melanie Walters and Seth Fox.

When Melanie plays the other homicidal hoofer, Velma Kelly, it becomes “my first show back” after giving birth 11 months ago to baby Leo. Her infant son could be heard expressing himself in the background as we talked about her return to the stage. Walters, who worked on the staff of the Playhouse until leaving to become a mother, kept teaching until three weeks before Leo’s arrival.

“There weren’t too many shows that would get me out of the house this time of year,” she said. But she’s been cast in Chicago before and loves the Bob Fosse-Fred Ebb-John Kander creation set in the Roaring Twenties. The time of year she refers to is football season, when husband Andy is so busy directing the Lewis Central High School marching band that he’ll miss her Friday, Sept. 16, opening night.

For Seth Fox, Chicago is a new opportunity to tackle the razzle-dazzle attorney, Billy Flynn, “a role I’ve always wanted to play.” Like Walters, Fox accumulated lots of Playhouse credits in musical roles, from Zombie Prom in 2004, followed by the likes of Hair, The Full Monty, Annie Get Your Gun and as Rooster where he tried to keep the sun from coming out tomorrow in Annie.

But, like co-star Melanie, he says he “took a big breather from theater” after playing Bobby in Company. Unlike Walters, Fox doesn’t consider himself a dancer, but enjoys stage movement, which for Billie Flynn “is not terribly complicated.”

The musical doesn’t include the flashy tap dance that Richard Gere performs in the Oscar-winning film.  Melanie, on the other hand, was already into dance at age 3, long, long before she started as a theater major in Kearney.

The three co-stars appeared in Thoroughly Modern Millie at the Playhouse, and Walters joined Fox in Company, then performed this summer with Kirsten Kluver in the month-long Bronte Festival at Joslyn.

While Melanie was raising baby Leo, Seth has been working at a Montessori pre-school, doing an after-school drama program.

He watched old films, like “Broadway Melody of 1929,” to work on Flynn’s rapid-fire dialogue. “I went to the audition and played him as a fast talker, machine-gun fire.”  His favorite scene puts Billy in the courtroom arguing “They both reach for the gun” as he defends Roxie in her trial for shooting her lover.

Though Flynn has three songs, Melanie’s Velma has to work harder in two solo numbers.  “I Can’t Do It Alone” is a strenuous, non-stop song-and-dance. Then there’s the famous chair routine and, of course, the memorable “All That Jazz,” which Kirsten also performed last year in the Kander-Ebb revue, The World Goes Round.

Director Carl Beck, aided by music director Jim Boggess and choreographer Roxanne Nielsen, has cast seasoned dancers such as Nielsen and Michelle Garrity as the killer chorines, with Mary Beth Adams as the prison matron Mama Morton, whose palm must be regularly greased by anyone who wants her favors.

But the role that drew the most aspirants to audition shouldn’t be surprising to anyone who has seen the show and heard Amos Hart, Roxie’s sad sack husband, sing “Mr. Cellophane.”  It was first sung memorably at the Playhouse years ago by the award-winning Frank DeGeorge as the cuckolded Amos, who complains that people see right through him.

Beck cast a newcomer to Omaha, Eric Quam.  Walters suggests, “He makes you want to go and give him a big hug.”

Another character, Mary Sunshine, an apparent sob-sister journalist, has often been identified in a way that crossed gender lines, but the Playhouse lists Joey Galda in this great little cameo role.

Chicago runs Sept16-Oct. 16, 7:30 p.m., Wednesdays-Saturdays, 2 p.m. Sundays (no Sunday evening performances) on the Howard and Rhonda Hawks Mainstage Theater at the Omaha Community Playhouse. Tickets are $40 for adults, $24 for students; $29 and $18 for groups. Call 402.553.0800 or visit omahaplayhouse.org or TicketOmaha.com.