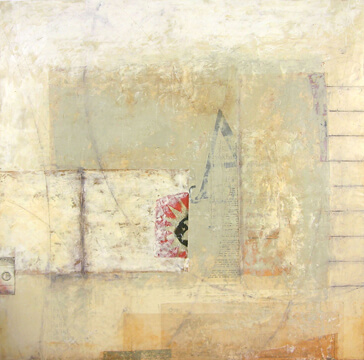 Whether considering the material of which it’s made, which Varnedoe does, or the material it contains, Modern Arts Midtown contributes to the conversation with Graceann Warn’s Trace Elements, new encaustic paintings on panel, now on view at the gallery through August 4, 2012.

Warn was raised in New Jersey, and earned her Master’s in Landscape Architecture from the University of Michigan. It was while working as a landscape architect, and making assemblages from found objects, she discovered Painting as her “calling.” By trusting her intuition, and paying attention to a series of serendipitous experiences, she found her way. Her creative development has brought her to this resonant “mash-up” of eloquently honed encaustic works.

Warn’s unfolding sense of time and space, lends itself to the possibilities of encaustic, also known as hot wax painting. This medium, dating back to 5th century Greece, uses a mixture of heated beeswax and colored pigment.  Encaustic provides the possibility for creating variable translucent surfaces. Adopting this ancient technique, while simultaneously pushing its potential, Warn inventively captures and considers her subjects. In her artist statement she describes using “the metaphor of excavation in the attempt to unearth an object or solve a mystery.”

Referencing among other things language, place and time, much of the work in Trace Elements cogently calls to mind the encaustic paintings of Jasper Johns. Johns’ concern with the relationship between seeing and knowing resonates in Warn’s “Finding True.” A hanging red plumb bob attached to the front of the predominantly black and white painting is visual confirmation of accurate positioning on the gallery wall. Closer scrutiny reveals traces of shapes embedded in the wax. Among the notations found are a sphere, an equilateral triangle and a golden rectangle. They all contribute to a lyrical movement complementing the light/dark contrast. The material construction of “Finding True” supports the ephemeral mathematical concepts portrayed in its surface.

Through her skillful use of materials, Warn is able to create a dynamic tension balancing the rational and the intuitive. Warn’s art paradoxically illuminates the unseen. In an interview with Gallery Director Laura Moriarity, on the website http://www.rfpaints.com Warn describes how she first learned she experiences the world differently than most people in a process known as synesthesia.

“LM: Were you already making art when you first learned that you were a synesthete?

GW: Yes. I only realized that my brain was wired differently than the majority of people a few years ago while listening to a program about synesthesia on NPR. I turned to my husband Geoff while it was being discussed and said “don’t you do this?” and he said no. I was just born with this sensory mash-up and never thought about it. I feel a little lucky to sense the world this way- now that I’ve been made aware of it. At the very least it makes for great dinner party banter. “What color is the number three?” and so forth. (It’s chartreuse by the way).”

“Levitation” appears to ask how do we position ourselves in relation to the ‘sensed?’  The graphic plane shift of two bands of black and white horizontal stripes is balanced by a cascading ‘loop to loop’ motion of circles floating in the space above. A small red square punctuates the tactile surface inviting the viewer in. Notations of upside down formulas float in the background.  Knowledge seeks its place between the ether and material world.

In describing what inspires her, Warn says in this same interview, “Like many artists I am inspired by old walls, architectural details and crumbling structures. These are the point of departure for me which serve as the “look” of the piece. As for content, I like to list words or lines of prose and poetry that I come upon and build pieces that reflect my processing of them. Sometimes one word can set in motion a series of pieces. Sometimes it’s the name of a place -like Recoleta, most recently. Words are extremely potent for me. My synesthesia stimulates a cross between words and colors as well as words and flavors. In this way words can really expand in my head. I’m certain this comes into play when I use words to spur work.”

Recoleta the place is a downtown residential neighborhood in Buenos Aires, Argentina. Warn’s painting “Recoleta” is a play of red encaustic on panel divided into several zones of activity. Intriguing variations move throughout the surface, providing the painting with an atmospheric sense of aliveness, and anticipation of discovery.

Warn’s understanding that a single word could prompt a series of works, made using the word “One” as inspiration for a painting an act of invention all its own. Jasper John’s use of numerical symbols in his “Numbers” series contrasts with Warn’s “One” written on the canvas. The horizontal white band containing the word is bisected by a vertical line inscribed from the top to bottom edge of the canvas. While the word and the picture plane are each divided, they are also unified through the proportion and balance of color and shape.

“Lingo Tiles” excites the imagination. The joy this group of panels provides is Warn’s playfulness with classical concepts of balance and measurement. Each panel is a variation on this theme.  Golden Mean rectangles, Johann Kepler’s Astronomia Nova, circle variations and more cross reference one another. All the panels come together to create an experience larger than the sum of its parts.

The strength of this exhibition resides in Warn’s use of the language of painting to recreate itself. The integrity of the craftsmanship enhances the presentation, inviting the viewer to linger, and look longer. The more compelling pieces are those which contain more references, such as “In Barcelona.” The warm/cool balance of the white field atmospherically supports the action and activity of line, shape, and symbol. The reversed Spanish text placed upside down communicates a restless energy, while the gentle swinging movement of an arc implies a circle larger than the piece itself. More multi-referenced examples include “Pluto”, “Conjecture” and “Density.”

There is a lively intelligence at work here. Whether excavating with the head or the heart, Trace Elements provides a treasure trove of material for each viewer to unearth and discover.