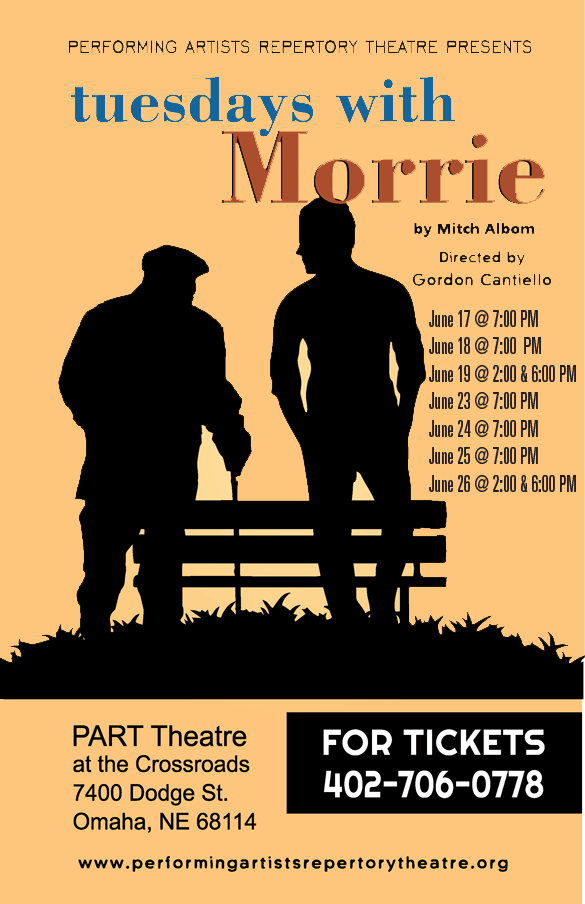 At this fractured and perilous time in our history, it may be significant to ponder messages Mitch Albom inserted into his autobiographical book Tuesdays with Morrie. Albom wanted to convey that media are preoccupied with death, hatred and violence; he sought to emphasize the importance of devising cultures of our own to transcend the dominance of popular ones. He tried to prompt us to cherish acceptance, communication, love and openness.

All this lies within what Jeffrey Hatcher melded into a stage version of the book, one which you can experience in a Performing Artists Repertory Theatre (PART) production.

The one-act, two-character script dwells on many visits made by newspaper sports columnist Mitch Albom to be with his 78-year-old former sociology professor, Morrie Schwartz. Schwartz was dying from ALS (aka Lou Gehrig’s disease.) Long out of contact with Morrie, Albom accidentally learned of the former’s terminal condition and thereafter went to see him often. (FYI “Morrie” means “my teacher” in Hebrew.)

Albom candidly reveals his own frailties, long-hidden from himself and others. He also reveals later self-discoveries, becoming close to Schwartz. In effect, the former teacher had something new to teach. Inherent in the story is questioning what we do with our finite lives. Although such themes suggest dark seriousness or some kind of tear-jerker, actually this experience can brim with humor and charm.

“There is the sentimentality that can come with a beloved character’s passing, but there’s also something deeper, almost archetypal, here about the relationship of students and teachers,” said a New York Times review.

By the way, in 2000, the book spent many months on Times Best Sellers list. There’s also a movie version starring Jack Lemmon and Hank Azaria.

Jeffrey Hatcher is probably best known for his play Compleat Female Stage Beauty, but has written many more, including Three Viewings and Scotland Road. He adapted Henry James’ The Turn of the Screw,  Robert Louis Stevenson’s Dr. Jekyll and Mr. Hyde, along with works by Gogol and Goldoni, plus scripts for the TV series Columbo, starring  Peter Falk.

PART is donating a percentage of ticket sales to Omaha’s ALS Association.

There are many different days and times for your own visit with Morrie and Mitch.