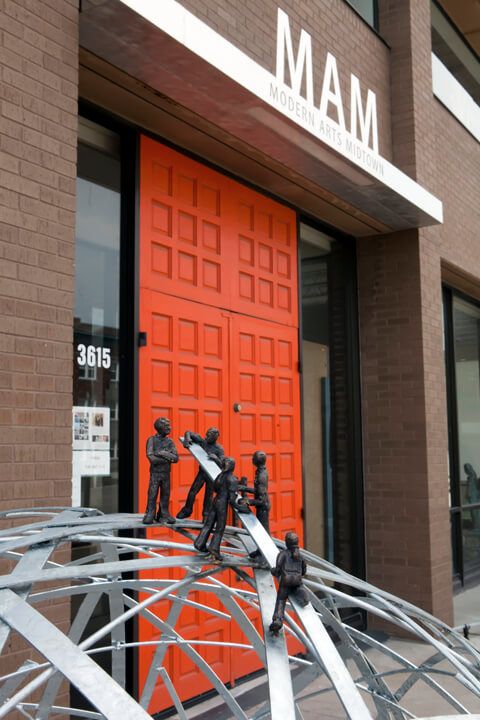 “I like context and working with the site,” Burmeister said. ‘Help Wanted’ (the subtitle for his series in the exhibit) is a good example of taking an idea and exploring it. It seemed like an interesting thing to put on the wall. If you’re going to put a sign up in Omaha, put it on Dodge Street. It’s fun. That’s the beautiful thing about art, improvisation and something interesting to think about.”

Something interesting to think about is a consistent theme in Jamie Burmeister’s art.  This new exhibition at MAM, his first in a commercial gallery, doesn’t disappoint. The orange letters of the crudely formed wooden “Help Wanted” sign ironically comment on the wooden orange doors of the immaculate gallery space.  Looking closer, there are many small ceramic figures lined up in varying postures and positions.  The variations in tone, size, and shape present a cross section of humanity, a more sophisticated variation of his earlier vermin exhibitions.  Are they seeking help or offering it, a question inherent to the paradoxical nature of labor itself.

The three large egg-shaped, metal sculptures in front of MAM appear at first glance as formal constructions. Made of rolled steel that has been galvanized, their scale and placement might indicate traditional modernist pieces. Yet the little bronze figures in and around the shapes appear to be in the process of production, building the forms as we see them.

“A lot of the overall theme for me is about work,” Burmeister said. “Why are they building them?” The contrast between the large steel construction and small bronze cast figures creates intriguing visual tension between perceived subject and object. They are as fun to look at, as they are to think about.

“I’m interested in sculpture and its history,” the artist said. “Right now, ‘contemporary art’, what does that mean? Traditionally made bronze and clay, used in combination with a contemporary installation of formal sculpture makes sense.”

In the gallery ceramic vermin abound. Some installed in, on, and around a pyramidal structure of open cube shapes display a vast array of gestures and drama. As couples or groups, their collective humanity communicates the ancient Greek concept of agape, the fostering of good will. The two victorious vermin at the top indicate collectively that achieved goals might be a beneficial paradigm in today’s culture.

More intimate vignettes can be found in the bronze figures mounted in the gallery. One caught in a mouse trap with a dollar bill, or two fending off a rat as big as they are, one giving the peace sign, or two trying to hear one another, and many more speak of everyday life as we encounter it. Working, resting, and playfully responding, the bronze vermin reflect the open wit and wisdom of an artist fully engaged, and getting the job done.

Conversely, portraiture emphasizes the individual. Several of the artists accompanying Burmeister use this form to great effect. Justin Meyers’ “Bottleman”, charcoal on paper, evokes a visceral sensation. The skin surface and close-cropped head are literally in your face. If you’ve ever wondered what it’s like to be in someone else’s skin “Bottleman” might give a clue.

Byron Anway’s “Haruki”, oil on panel, combines color and paint in a thoughtful portrayal of observing. The abstract handling of figure-ground might say as much about the subject as does the realistic depiction. Gerard Pefung’s “Dreamchasers No. 1-12”, twelve 12-inch square portraits neatly done with bright color and fluid drawing appear as ‘graffiti all dressed up.’ They beautifully complement Pefung’s paper pieces, which illuminate heartfelt process in psychologically inspired portrayals of the human condition.

The figure and its expressive possibilities find thoughtful consideration in Richard Chung’s ceramics. While the influence of Robert Arneson comes to mind, Chung’s vision of the human condition is uniquely his own. “Figure #142” is having a very different experience of a white cube than Burmeister’s vermin. Chung’s “Figure # 142” resonates with Charles Novich’s headless, anonymous, female “No. 82” nude. Novich continually impresses with his technical mastery of materials. Theresa Pfarr’s female in “Must Haves” is more recognizable, yet not necessarily any more liberated than Novich’s “No. 82.”

The late 19th C. French painter Paul Gauguin asked “Where Do We Come From? What Are We?  Where Are We Going?” in his 1897-98 allegorical painting of the same name. Early 21st C. America finds Jamie Burmeister and Company asking similar questions. Come see this exhibition. It’s an eye opening opportunity to work on exploring possible answers.