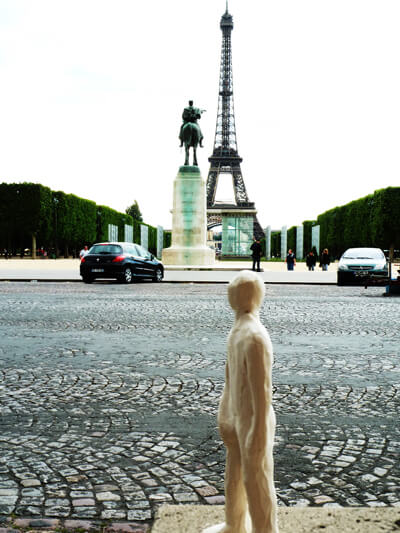 Jamie Burmeister is the type of guy who can’t stand still. The 41-year-old exercise scientist-turned-artist constantly works on new projects, whether it’s hardwiring a rocking chair to correspond with a movie projector, or modeling 4-inch men out of clay. The latter, Burmeister’s Vermin Project, is his most popular. The idea of the Vermin Project — the first of its kind — is to install miniature sculptures in public environments. Essentially, the word “vermin” comes with negative connotations. Depending on who you ask, the term can have several meanings, but mostly refers to pests that invade human spaces. Which is exactly how the artist developed the idea. “There are starlings that live in the gables up there,” Burmeister says, pointing to the ceiling corner of his Gretna studio. “You’ll hear them in there having babies. My first instinct was to get them out. They’re dirty and they’ve been all over. Yet another part of me is thinking, they’re just doing the same things we’re doing, they’re just trying to find a home. Live and have their family.” He began making the vermin two years ago to put alongside his video installations at art shows. Because his work tends to be more conceptual, Burmeister wanted to incorporate tangible pieces. “I was using traditional methods,” he says. “I was making work I wanted to be about consciousness and things that are mostly introspective. I got into sculptures because I enjoy the physicality of making them. That’s the sort of the thing that brought me around to doing the vermin, just so I could start using my hands again.” The Vermin Project took a turn in January when Jeremy Lipschultz, director of UNO’s School of Communication, approached Burmeister about speaking at the October 10/10/10 conference, an event focusing on technology 10 years past and 10 years into the future. Lipschultz asked if he was using any type of tracking system, a concept Burmeister hadn’t considered. Soon after, Burmeister launched a website, vermin.me, and began using Google Maps, with each pinpoint representing an installed vermin. His goal was to place vermin in every country. Although Burmeister travels extensively for his band and art, he couldn’t accomplish the task alone. “When I was spreading them out I was thinking ‘This is going to take forever for me to do,’” he says. “So I thought if I could recruit help from people, I’d be in good shape.” The artist began using social media to get the word out; he received so many requests, he had to start using molds to make the vermin more quickly. The vermin started spreading exponentially. Over 800 have been placed in 430 locations since January, including Spain, Saudi Arabia and Norway. They are found solo or in groups, on unknown walls and buildings or outside of famous statues and structures. Visitors can click the map’s pinpoints to see who placed the vermin and when. He also began varying skin color and postures. Later, he experimented with putting them together, such as two vermin shaking hands or giving each other a pat on the back. A favorite is a group of three punk-rock vermin, each sporting Mohawks and standing with their clay fists thrust rebelliously in the air. To deliver the vermin to participants, he uses good old snail mail. Wrapping three pieces in bubble wrap, he ships each with “vermin.me” engraved on their backs. Thanks to two grants, one from the Nebraska Arts Council and another from the UNO Cultural Fund, Burmeister is able to pay shipping costs. While public installations and audience participation have long-since been a part of the art world, Burmeister’s collaborative method of social media, the public and sculpture is revolutionary. It’s as if the vermin themselves aren’t the art but rather a conduit, providing a channel in which people can connect. The real art in Burmeister’s project is how 21st century methods of communication, as well as people, transport an artist’s vision. “I hope the vermin project results in many things,” he says. “New connections, opportunities for collaboration, vermin spreading to all countries of the world … I think this project has the potential to do many things depending upon how people choose to interact with the project and the vermin. Part of the excitement is that I don’t know what will happen.”