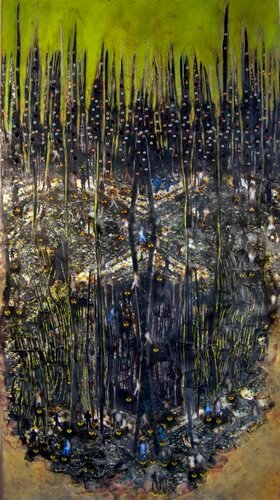 Initially Eliska Greenspoon’s new mixed media work at the Fred Simon Gallery provides a sense of calm. Images of nature, soft solid colors and lines and silhouettes of human figures welcome the viewer into the gallery’s urban chic environs.  When you begin to get deeper in the venue and turn the corner, stories reveal themselves and you are caught up in the narratives she created for Visual Dialogues.

As the Czechoslovakia native says of her work, “It’s based in photography, but you might not know it by looking at it.”

Most definitely not, especially with the peaceful “Sky Falling,” and “Contemplating What to Do,” two large works in the first gallery composed of her process of layering and manipulation of various mediums.

Greenspoon earned her MFA at Clemson University years ago by exploring the integration of photography and drawing, experimenting and blending materials from drawing and photography to paint and charcoal and she continues to today.

The artist deliberately exploits her photosensitive materials to echo her concerns with various issues from the environment to the human condition, to global warming and seasonal change, the result of which may appear straightforward in its elegance of line quality, rich colors and pleasing composition. Yet each piece is created via her intentional act of “creative violence”; tearing, burning and adding wax to a collection of recycled images, ultimately revealing aesthetically loaded final pieces with depth and meaning.

The work hung in the first gallery seems to be more subdued and intimate—natural colors of whites and browns, even imagery like trees and rocks. Despite the somewhat troubling titles, the large works come across well-developed, balanced compositionally and easy on the eye.

The eeriest piece according to the artist, “Japan 2011,” rightfully brings you into the second room.  Created using components of Japanese print from a book, tiny silhouettes roam throughout, heading for holes to hide in, with murky green texture dripping down almost ready to envelope them. Greenspoon was in the middle of creating this piece in March when the devastating earthquake hit Japan.  The emotive piece might be the most successfully challenging piece in the show, most probably for the authenticity of its story.

Once in the second gallery, women’s issues are one of Greenspoon’s main concerns in three large works: “Delightful Garden,” “Women’s Healthcare” and “Esther’s Preparation for the King.” Though conceptually earnestly important, the pieces seem to end up more troubling than pleasant like the soothing pieces in the first gallery, though perhaps intentionally.

Instead of women being on view for voyeurs’ free enjoyment as Bosch’s has been interpreted, Greenspoon’s images of faces watching the viewers, along with the medium torn to shreds, and painterly lines and expressively drawn womanly figures, emits an uneasy force.

“Women’s Healthcare” illustrates in heavy black and red two conjoined abstract female torsos trading blood; the sewn-on-canvas uterus continuously being given and taken away.  Greenspoon reveals forcefully yet eloquently the recurring issues on the nature of being female.

“Esther’s Preparation for the King” depicts the Biblical character Esther as she makes the ultimate sacrifice to save her people, beautifying herself to marry King Xerxes. Greenspoon layers painted nude females amid elegant trees and birds inside a white floral lines acting as a cage, again gracefully yet intensely rendering this traditionally anguished story.

In her traditional layering style sans noticeable painterly lines, the namesake, “Visual Dialogues” are two small pieces using found glass from the beaches of Connecticut where she spends her summer.  Countless silhouettes of people wandering scatter the pieces in the rich blue echoing of glass as if waiting for something and evoking a curious response for what isn’t revealed.

People show up in many of Greenspoon’s work as in “Down the Rabbit Hole,” a mostly black and white piece where the artist explored using Japanese print. The rabbit itself takes a moment to find among the people heading for the hole a peculiar admittance common in her work.

All sixteen pieces in Visual Dialogues similarly evoke a response sometimes subdued and compositionally pleasing in the first gallery, sometimes loud and harsh as with the work in the second gallery.

The artist’s strength notably exists in her heavy process, though perhaps often unnoticed. Close examination reveals her deep passion for issues of nature and humanity which she so handily describes in her title labels.

Check out Visual Dialogues at the Fred Simon Gallery, 1004 Farnam Street, through January 27, 2012. Gallery hours Gallery hours of operation are 8 – 5, Monday through Friday. More information at nebraskaartscouncil.org and eliska-mg.com.