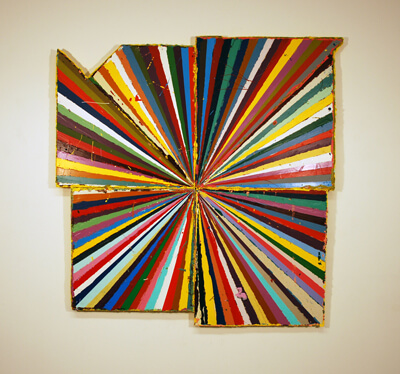 When the Omaha Entertainment and Arts association holds its annual awards ceremony Feb. 13 at Harrah’s Casino, patrons will no doubt enjoy a celebration devoted to area artists in three mediums, knowing they helped put them in the spotlight. Yet, while the audience will again be entertained that Sunday evening by music and drama, nominees in the visual arts who also anxiously await to be named winners in their categories, will enjoy their own 15 minutes of fame in an exhibit at the Hot Shops Art Center. This exhibition, organized and hung by Rob Gilmer, visual arts committee chairperson, artist Sora Kimberlin and Hot Shops Manager Tim Barry features 2D and 3D work from 20 solo nominees in six categories as well as dozens more from several past group shows. Visual arts categories and their nominees include Best 2D artist: Claudia Alvarez, Gilmer, Josh Powell, Kim Reid-Kuhn, Bart Vargas and Watie White; Best 3D artist: Alvarez, Mary Day, Leslie Iwai, Matthew Schrader, Therman Statom and Renee Ledesma; Best emerging artist: Rebecca Herskovitz, Powell, Tana Quincy, Dana Rose and Adrianne Watson; Best Group Show: Labor/Labour , Omaha Print Guild’s Last Exhibition, Out of the Woods , Panoptic and Women Who Weld ; Best New Media artist: Jamie Burmeister, Tim Guthrie, Iwai, Alex Meyers and Statom; Best Solo Show: Alvarez, Day, Ledesma, Michael Scheef, Statom, Vargas and White; Best Visual Artist in 2010: Larry Ferguson, Day, Iwai, Powell, Statom and Vargas. To be eligible, nominees had to have exhibited in a legitimate show between Sept. 1, 2009 and Aug. 31, 2010. A legitimate show is one that is organized and curated with a public opening in a designated public gallery within a specific time period. Shows in private homes or studios do not qualify. Visual Arts chairperson Gilmer is determined that these awards not devolve into a popularity contest, and for future reference he explains the vetting process: * Nominations made by the public first during the allotted time period must include the name of the show the artist participated in. * Public nominations and the total number of votes will be compiled by the OEAA’s accounting firm and then passed on to Gilmer and his committee. * The visual arts committee will then validate the people’s choices based on the above criteria and narrow the list in each category to 5-7 nominees based on top vote getters and the committee’s additional recommendations * The final list of visual arts nominees is then passed on to the accounting firm which then compiles an official ballot to be voted on by the OEAA board and visual arts committee. Winners are then announced on awards night. “We want the voting process to be as transparent as possible,” Gilmer says. “In the past we’ve seen too many votes cast by the public for artists who didn’t show during the designated time or at real shows. We think the more people understand how this works the more they will get involved. We’re even placing greater demands on our committee.” In 2010 the visual arts committee consisted of Gilmer, Brigitte McQueen, former manager of the Bemis Underground, photo-artist Larry Ferguson, artist-instructor Eddith Buis and yours truly. For 2011 Gilmer added arts collector Steve Carter and Janet Farber, director of the Phillip Schrager Collection of Contemporary Art. “It’s a very diverse group with a good background,” Gilmer adds. “Think about it. There are artists, academics, gallery owners past, present and future, curators, collectors and an arts writer. As time goes by we can use these criteria to add members.” Gilmer says the committee will hold bi-monthly meetings and require its members to make notes and keep journals regarding the shows they attend. “Our goal is 100 percent attendance at qualified shows by as many members as possible. It’s the only way to give these awards the credibility artists and their public deserve.” On that note he promises that artists on the committee will not nominate themselves during the vetting process and will abstain from voting for themselves if nominated on the final official OEAA ballot. The Visual Arts Show at Hot Shops has its own appeal because it’s here that the nominees are truly on view and can say, “I earned the right to be here.” There are many fine works on display, but what follows are 10 pieces that perhaps best represent what this year in art had to offer, at least as seen in this exhibit: * “Super Nova #3,” a vibrating pinwheel of color in the form of a geometric wall hanging from Bart Vargas in his show at Anderson O’Brien. * “Bacchus (Caravaggio),” a witty painting by Watie White that cleverly messes with Slippery Humanist Values , his marvelous show at the former Jackson Artworks. * “Corn Dog w/ Mustard,” another satirical painting, but with darker undertones, this one from Claudia Alvarez from one of the year’s strongest exhibits, Corn Eaters at the RNG Gallery. * “Polaroid Test Shot,” a large blow-up self-portrait by Rob Gilmer complete with blemishes, a study of lost youth, tender, wistful and romantic. * “Your Sadness Caught Up to You/And You Decided to Run,” another stirring offering here, this one a richly expressive painting from Rebecca Herskovitz, a sublime portrait of sexual vulnerability. * “I Take It We’re Going Back to Your Place,” a humorous mix media pastiche of dating mores and pop culture icons from emerging artist Josh Powell. * “Photographs and Artifacts” from what may be the best installation of the year, Holding My Horses by Leslie Iwai. * “Untitled,” by Tana Quincy, an anatomically detailed painting of muscle and sinew, the most understated piece of feeling and expression in this show. * “Song Study,” Mary Day’s ephemeral, cosmic cityscape sculpture from her impressive Scaffolding exhibit at the Fred Simon Gallery. * “Vermin Me,” another sighting of androgynous, miniature sculpture from Jamie Burmeister that seem to appear any and everywhere like a Bansky logo, including the corner entrance to the gallery. The Visual Arts Show opens officially this Saturday, Jan. 22, 6-9 p.m. at Hot Shops Art Center, 1301 Nicholas St., and continues through January. Visit hotshopsartcenter.com.