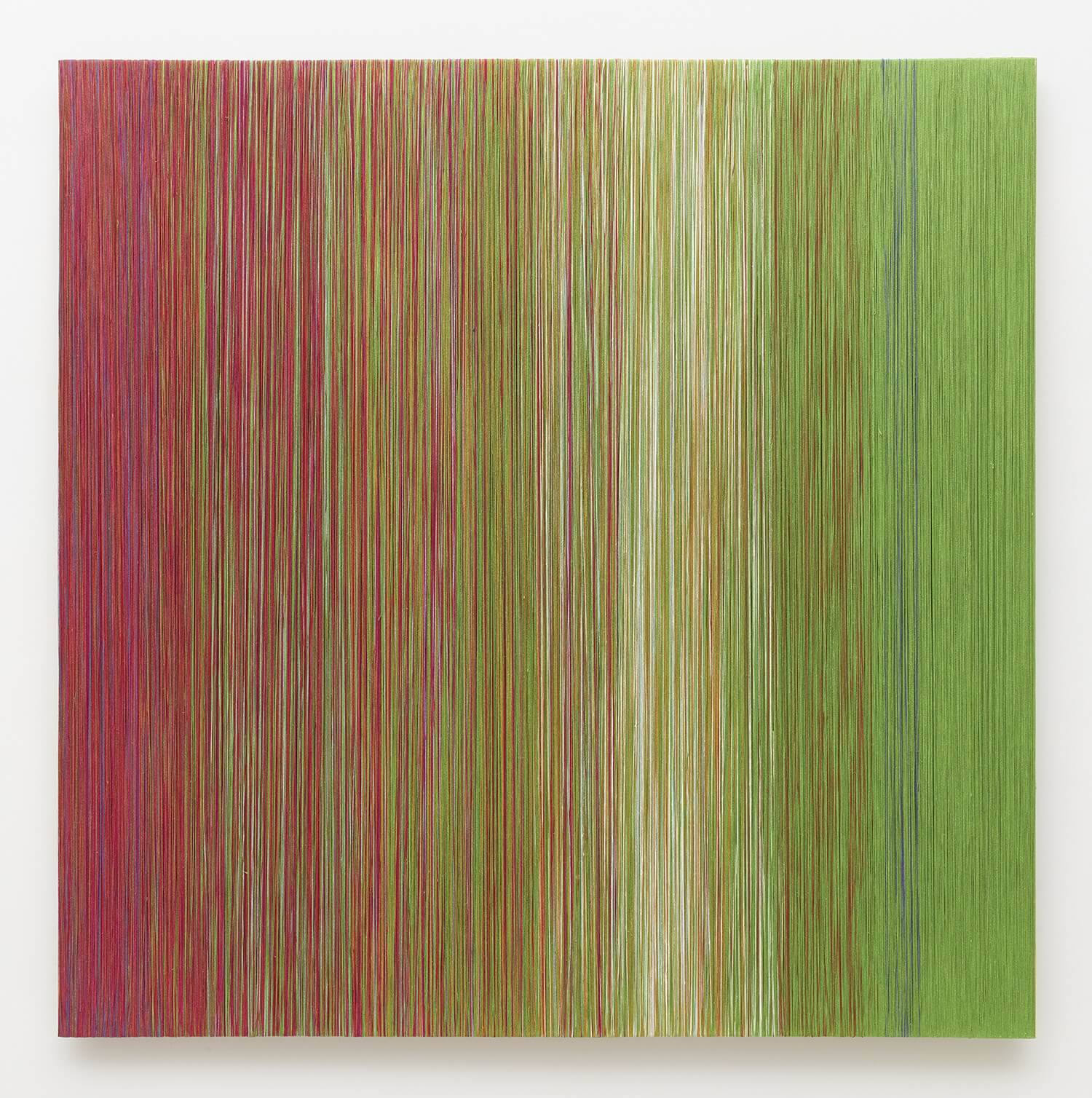 Though the comprehensive Sheila Hicks exhibit, Material Voices, at Joslyn Art Museum comes with an additional fee, it is well worth the price of admission for anyone who loves a colorful palette and fabric art, and who might usually be put off by abstraction.

You needn’t worry about “understanding” the work by the internationally known Hicks — it’s all about ways to use color — lots of it. There are giant “Boules” — hassocks really — gloriously bound by repeated wrapping which seem to have been carelessly tossed out for us to view on their white plinth.

There are bunches of small minimes on the walls made on a handheld loom, with colors colliding into both warp and weft in surprising and lovely color combinations and design, sometimes with a bone or corn husk slipped in for a focus or variety.

A favorite for the contemporary viewer might be the seemingly simple, large wrapped “color painting” of tiny threads jostling against one another as seen in Predestined Color Wave II, or Treaty, both done in 2015. Could the latter piece be asking for a ceasefire between the races? It is front and center at the beginning of the exhibit.

There are giant wool prayer rugs hung on walls for study, raising their aesthetic worth. As a collection, all these works seem to catalogue the huge possibilities of fiber art. And all are beautifully crafted, Ford Foundation Study—1966, for instance.

Because the Joslyn cannot suspend over ten pounds of weight from the ceilings, this is primarily a “floor and wall show.” But there seems to be plenty here to tell this fiber story.

One of the largest pieces, Cordes Sauvages Pow Wow (2014-15), is made up of 26 tightly wrapped and twisting elements which seems to remind one of an early culture. The shadows cast from the piece are essential to the presentation.

Visitors may well appreciate the beautifully crafted 33” rondo in the first room, Hastings Visit to the Great Plains (1979).  This piece was loaned from the Museum of Nebraska Art and is near the latest Joslyn acquisition, Mandan Shrine.

Hicks completed it in 2016 for this exhibit to honor legendary artist Karl Bodmer, whose work is a mainstay of Joslyn’s permanent collection. Many Omahans were introduced to her work a while back at KANEKO fiber show with a Rapunzel-like giant braid, also loaned by the Kearney museum from their collection.

Though the artist was born in Hastings in 1934, Nebraskans have little reason to claim this titan fiber artist as just their own. She did have family who passed on the ability to sew, knit and crochet, but that’s not the main trajectory of her story.

The larger story, which can be enjoyed in the exhibition catalogue featuring essays and an artist interview by Monique Levi-Strauss, is in this bright and hard-working woman herself — and her incredible education at Yale Art School with an intense introduction to color theory and art history as well as architecture.

From the catalogue we learn that her family moved often. Hicks remembers painting as a child in a Detroit museum amidst Diego Rivera murals, and did return in summer to her grandparents often enough to remember the heat, wind and cornfields of the Midwest.

Her exploration of Peruvian textiles at the Art Institute of Chicago as a teenager was a more cogent experience to her eventual career in fiber. After two years of college, she transferred to Yale to study art. Hicks studied with renowned Bauhaus professor Josef Albers and took independent textile studies with his wife, Anni Albers, known as one of the finest textile artists that came to America from Germany when many Bauhuas figures fled the rise of Hitler and National Socialism.

Hicks and architecture students were having long discussions with Louis Kahn, one of most celebrated architects of the postwar era, who was teaching at Yale from 1947 to 1957. She built models with students in Yale’s architecture program, which led to a lifelong interest in collaborating with architects. She would later espouse using fiber to soften and add color to the more streamlined architecture being designed at that time.

Another significant professor for Hicks was Latin American historian George Kubler, a scholar of pre-Columbian sculpture who taught that the decorative arts were as valid as fine art.

When Kubler showed Peruvian “mummy bundles” to his class, Hicks decided she needed to begin researching these elaborate fabrics to try to figure out how they were made. Needing to learn to weave to do this, she fashioned a small loom with a canvas stretcher and nails to make small weavings she called “minimes.”

With this simple plan, Hicks was to find her lifelong “voice” with fiber, making minimes and experimenting with color as an artist might sketch out new ideas on paper. She has created over 1,000 of these studies over the years.

Hicks says that it was a long struggle to establish herself as a fiber artist. But here this woman is, at 82, still working in Paris as she since 1964 in discovering new ways to work with thread.

Jason Farago, writing in the Material Voices catalogue, said that Hicks’ greatest achievement is to offer us the idea that color is an uncommon thing, a thing of wonder.

“Hicks has fashioned a chromatic language so expressive, it can reweave a rainbow.”