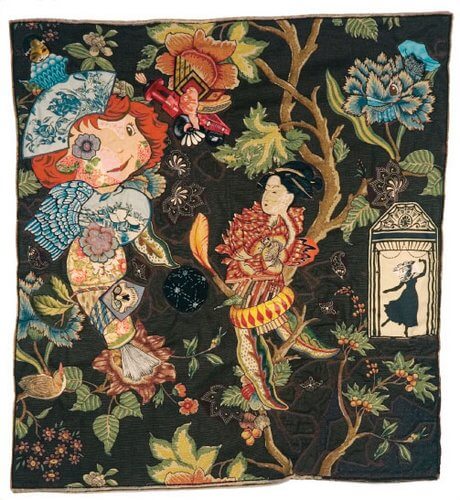 When approaching Peerless Gallery, it appears there is meat hanging from the ceiling. Opening the door, one finds instead a set of striking red, orange and pink oval forms, about twenty of them suspended near the large windows of the gallery, titled “Whisper and Murmur,” crafted of ripped fabric by artist Sarah Kolar.

This Union for Contemporary Art Fellow’s sculpture is an apt introduction to Material Matters, as it is the beginning of the Union’s extension into curating its own exhibitions along with community work.

Material Matters curator Brigitte McQueen, director of UCA, said it is raising money to renovate a former restaurant in North Omaha into a gallery space, but until then the union will collaborate with other galleries, like Peerless, to host exhibits.

As a debut exhibit, Material Matters McQueen’s selected fourteen local and national contemporary artists, each working in craft media, united in challenging our preconceptions of what clay, wood and fiber can offer in a genre not often discussed or seen in Omaha.

When selecting artists for the show, McQueen said, “I wanted the audience to be able to have very different experiences with the material as they walked through the exhibition. Despite the fact that everything in the space is made of three basic materials, each of the pieces is dynamically different.”

Most obviously exemplifying this is the second most prominent piece in the show, Michael Rea’s “Into Wild Blue Yonder,” a larger than life giant space-suit of wood, burlap, and foam. The garish figure almost scares you into absolutely questioning the other-worldly definitions of craft, art and even place.

Cheer is brought back, albeit peculiarly, with Maggy Rozycki Hiltner’s large duo of hand-stitched cotton and found embroidery. Much of the imagery is recognizable, from childhood or from grandma’s kitchen rags. In Hiltner’s “Providence,” the cutesy puppies and kittens play and drink from bottles of poison (marked with ‘x’s), playfully dancing along the stiched flowers and shrubs, with yellow bows framing the scene. In “Hurricane,” the innocent images of birds, kittens, strawberries and butterlies are shaped into a spiral, perhaps signaling the crazy beautiful storm that is the coming of age.

The other two embroidery artworks by Wendy Huhn and China Marks also use the familiar retro style but in somewhat opposing fashion. Marks’ more twisted style brings the naive imagery into warped, haunted darkness. “Radiant Messenger” gives Strawberry Shortcake a blue eye with a flower, and a collaged limbless floral body. A geisha figure seems to have an extra “limb” while a creepy fish-monster watches on, and a ghostly woman in black dances in the background.  Birds and organic landscape sneak out from the haunted atmosphere.

Meanwhile, Wendy Huhn’s smaller pieces are perhaps more deceiving, as the classic retro figures seem to be happily posed in the pleasant greenery, but upon closer inspection, in compromising positions. In “He Walks on Water,” a woman with a dog-face under spider web skies is being held by gunpoint by a man in a sharp suit.

Another compromising position is revealed in Kjell Peterson’s “I Take No Responsibility to be Part of the World as Shown and I Take Full Responsibility to Burn with the Sun,” the artist ironically left the clay unfired for this life-sized female figure in just underwear, left in the process of taking her blue shirt off, her face hidden, her ratty brown hair sticking out from behind. As the show moves on, the clay cracks more daily, utilizing the craft perhaps as a metaphor to fragile human life.

Diem Chau also illustrates fragility with her porcelain, organza cotton pieces. The eight small works show minimal figurative images sewn in light fabric somehow placed onto delicate porcelain plates and cups. “Women,” shows two skirted legs in orange and red and flat shoes, fixed hands hanging down. The clear fabric shows the shine of the porcelain cup behind in, playing on the vulnerability of the subjects.

Garth Johnson’s use of porcelain is quite contrary as he playfully splatters paint on plates and various sardonic images and symbols on teapots. In “Four Friends” a Playboy Bunny, bird, monkey and political elephant make a wild totem design on a teapot. The artist also gives to his lively process a video of him in practice.

Omaha-based artist Mary Zicafoose tapestries line the back West wall of the gallery, seemingly the most traditional of the exhibit, bringing McQueen’s vision to highlight the versatility of the material full circle, reminding the viewer of an understanding and respect for the material and for the ability of the artist to transform it as well as interpret it.

Artist Garth Johnson will be giving an art talk June 12 at Peerless Gallery, 3157 Farnam St. Material Matters will be open thru June 16. More information at wearepeerless.com and u-ca.org.