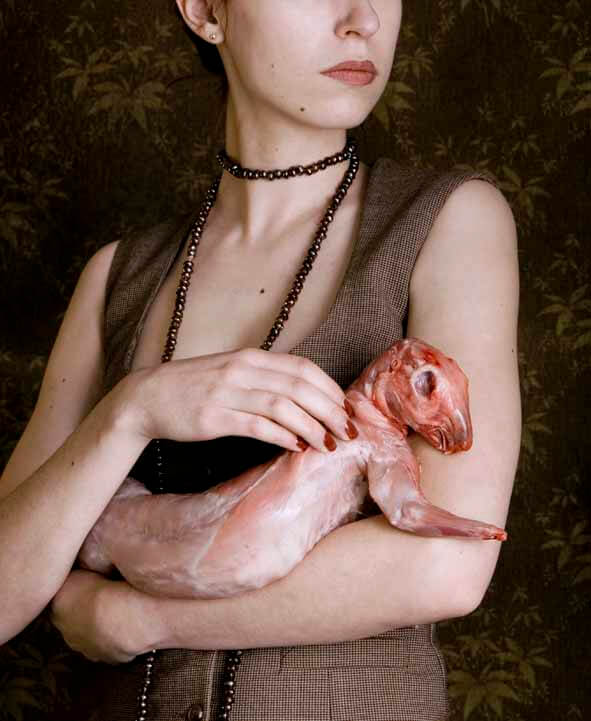 When it comes to images of children, flowers and animals, most photography hovers between the “sure thing” and the cliché. In Wild: Animals in Contemporary Photography, the current exhibit sponsored by the Moving Gallery, curators Matthias Harder and Maren Polte successfully demonstrate how an ordinary subject can be raised to the level of fine art.

Wild, on display through Sept. 8 at the Artist Cooperative Gallery in the Old Market features nearly 80 photographs from 17 international artists including Omaha’s Vera Mercer. Polte is a Brussels-based freelance curator and Harder is the Chief Curator of the Helmut Newton Foundation in Berlin.

This is Harder’s third exhibition seen in Omaha, including 2007’s Portrait: Berlin and Time, Death and Beauty in 2010. The “Beauty” of the latter did for one’s perception of flowers what Wild accomplishes for animals. The former explored issues of transience and death or “dark, ominous beauty,” a theme Harder repeated in his art talk opening in this exhibit.

“The title, Wild, is a bit fake,” he admitted, or certainly ironic as Harder went on to explain. “The exhibit represents an unusual approach to this rather boring or weak subject. It’s not about portraits with pets. And, it’s more than reportage or National Geographic.”

Harder said he was surprised to find “so many photographers who work with animals in such an imaginative way.” From a data base of over 60 artists he selected 17 who express and give new meaning to the “wild” in nature and animals. Though the tone and POV varies from the ironic and satiric to the humorous and critical, the work seldom fails to meet his curatorial eye for “ugly beauty.”

What Harder considers “ugly” really refers to the exhibit’s edginess as individual works often run against expectations not only of beauty but animal photography in general. Often images are not exactly what they seem whether they initially startle or please. Many individual works rely heavily on such paradoxes. Some please immediately for their aesthetic. Others do not and succeed mostly conceptually.

Arranged numerically by artist, Wild begins so with dramatic and deceptive imagery of Martin Klimas. His photos appear to feature an owl, eagle and hawk caught in mid-flight but have actually “shot” themselves by tripping a light beam sensor. The ironic result is something both wild and captive via a sort of self-portraiture. In sharp contrast are the black and white abstract “Spider Webs’ of Sascha Weidner in which the spider, like the birds above, is also a collaborator in the photography. Less appreciative are the netted flies who hang suspended like any captive audience.

Alexandra Vogt illustrates how wrapped up in each other she an her beloved horses are by imagining them within her fantasies: one wears her bra on its head, another is costumed as a unicorn and in another photo she poses with a horse while holding a mirror to the camera thus revealing who is the fairest of them all.

Also quite playful and fantastical is the colorful and carnival photography of Thorsten Brinkman. In photos such as “The Very Rare Zebra Dog” and “Ern the Bear,” the scenario is more than a costume party as Brinkman seems to poke a bit of good-natured fun at people who dress up their pets in a way that reveals perhaps even more about themselves.

A far quirkier series of “Images of People and Animals,” comes from Amin El Deb. In it, one’s communion with a “pet” varies from the pride of “A Small Patch,” the fearlessness of “The Dog Man” and the playfulness of “The Lady in Bra and Panties.” In all, the emphasis is clearly on a more intimate portrait of a wild nature one shares with all animals.

Two series focus sharply on the eyes of animals in a revealing, yet disconcerting manner. In “Among Animals and Plants” from Marc Peschke, a rhino, zebra and several birds stare back at the viewer from their bleak lifeless surroundings in a museum. But even more riveting is Marc Volk’s “Extinct” collection featuring such specimens as “Passenger Pigeon,” “Tasmanian Tiger” and a “Dodo,” who gaze lifeless at us with nothing less than an accusatory eye.

Socio-politcal commentary of a different sort influences two photos by Franck Christen, each with a very different aesthetic. In the first, “Jellyfish Triptych,” one is first struck by the azure blue palette of this underwater seascape. That is, until closer inspection reveals that some of the jellyfish have morphed into equally but more threatening diaphanous plastic waste that is pervasive in the oceans. The second, “Fish Market Diptych,” offers a more direct food for thought about pollution in the fishmonger’s industry.

Thilo Mohros and Ria Paricia Roder eschew all social commentary and give us animal imagery that creates a conflict of illusion and reality. Mohros presents a dual photo comparison of penguins at play in “nature” and challenges the viewer to determine which setting is a zoo, which is a museum of natural history. The irony here is that both settings represent some sort of captivity in the name or preservation.

Roder takes a lighter, more imaginative approach with her startling cinematic series titled “Park,” each photo a short film scenario of dinosaurs, swans, and elephants et al in a fantasy setting. Every pastiche, cleverly back-lit as well as front, is a noirish nightmare or dreamscape that would not be out of place in a Kubrick/Spielberg production such as “A. I. Artificial Intelligence.”

The most visually arresting animal photography is that of Vera Mercer and Carina Lange, each with a decidedly different tone and style. Mercer presents two views of “The Old Wild Turkey,” one in her signature baroque manner of a still life, the other a close-up portrait of head, beak and wattle. Mercer’s stunning mix of composition, depth of field and light, in what some might consider a macabre setting, lives up to the show’s promise of “ugly beauty.” Directly across from these photos is the equally disarming photography of Lange. With “Acedia” and “Lady with Rabbit,” the artist parodies glamour fashion photos and even Renaissance painting, i.e., da Vinci’s “Lady with Ermine.”

Lastly, the most understated, yet effective juxtaposition of the “Wild” and society is the “Spirit” series of Sofia Koukoulioti. In it, wildebeest, eagles, cranes and more haunt the city streets of Athens and Paris. Photoshopped on urban backgrounds, these “Wild” animals remind us less of their invasion of our environment and more of their shrinking natural habitat as civilization advances.