Home » Art » Literary » “You can’t depend on your eyes when your imagination is out of focus.” 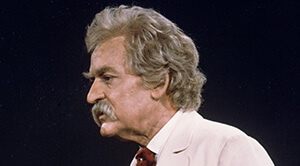 “Age is an issue of mind over matter. If you don’t mind, it doesn’t matter,” said Mark Twain. Certainly 91 year old actor Hal Holbrook doesn’t mind telling his age. He takes pride in his on-going 62-year performing career. He comes to Omaha’s Holland Center in what’s billed as “the longest running show in American Theatre history,” wherein he has been channeling Twain as a man in his sixties. “It is better to take what does not belong to you than to let it lie around neglected, ” the author once observed.

As you may know, Twain increased his fame enormously by giving public lectures. They put him on the map as a delightful entertainer.  (“I have been complimented many times and they always embarrass me; I always feel that they have not said enough.”)

Holbrook delved into Twain’s many pages and created this show, Mark Twain Tonight! which debuted in 1954. Five years later it played off-Broadway, then on Broadway in 1966 garnering the actor a Tony Award. He got an Emmy the next year for a TV version.

You could ask, if you’ve a mind to, how can this keep going? Wouldn’t everyone interested have seen it all by now? You must be joshing. There are so many wonderful things that the author wrote and said that you could attend several times and still hear something new. Of course, much of if bears repeating anyway. Nonetheless, to satisfy his audiences,Twain created a list of what items he might explore, not willing to pin down which, so as not to “cripple his imagination.” However “he generously conceded to a printed program for those who are in distress and wish to fan themselves.”

It’s probable that the evening will include some serous material: excerpts from Huckleberry Finn. There Holbrook as Twain takes on the sound and inflections of that ornery rural lad, ultimately rejecting legal and social norms of the period to aid black runaway slave Jim seek freedom.

Holbrook feels that what Twain says is timeless, noting  “Human behavior doesn’t change. Neither does its foolishness. That’s the joke.”

The actor has had an exceptional career, getting other Emmys, still performing in movies e.g. 2015’s Blackway, and on TV, most recently for several years as a regular character in Sons of Anarchy and in multiple episodes of The Event. https://en.wikipedia.org/wiki/Hal_Holbrook

Certainly, though, he’ll always be known for this indelible portrait.  “The transformation is so complete as to be unsettling at times, “ said The Washington Post. “The combination of Holbrook’s physical and vocal talents and the potency of Twain’s words is a mesmerizing thing to behold.”

Another review: “From the appearance of the mirthful faces leaving the hall… seldom has so large an audience been so uniformly pleased, ” from the  New York Times, May 7 1867, when the author himself appeared.

“I am an old man and have known a great many troubles, but most of them never happened,” Twain commented. But this event is happening and, as always, remains something worth remembering.