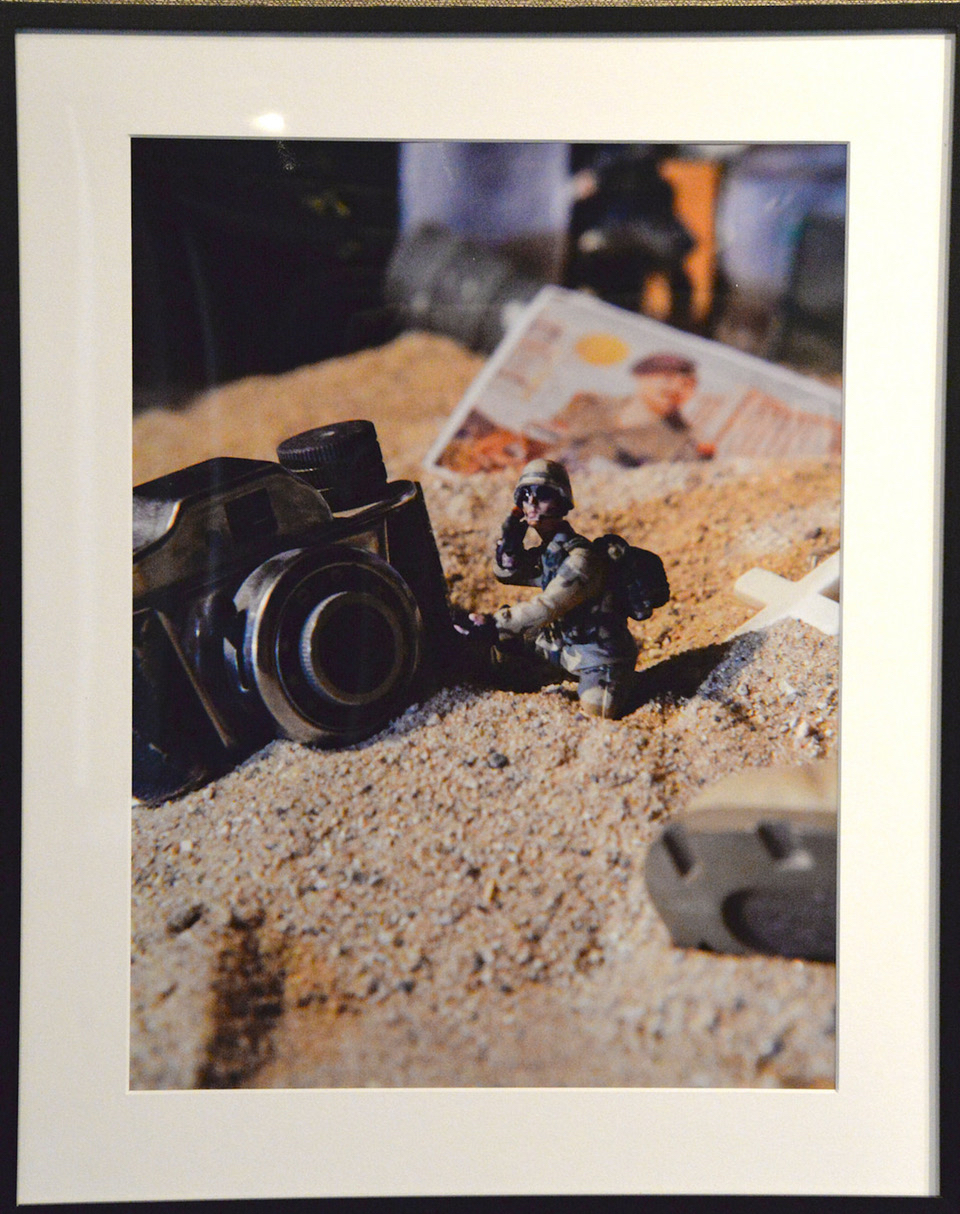 The current exhibit at the Michael Phipps Gallery, Love Letters,pairs Roberta “Bert” Leaverton with Peter Fankhauser for an excursion into the physical and psychological detritus of conflict and the personal and societal disruptions it leaves behind.

Ruminations get filtered through medium, time and distance, changing memories and each person’s recollections and responses to conflict. However, where Leaverton’s photographs pick at direct memories and personal scars, Fankhauser takes a more remote look at cultural and psychological fallout from violent local crime to global warfare.

Presented as photographic stills from allegorical skits, combat veteran Bert Leaverton’s surreal images portray real events she experienced during her deployment in the Iraq war. Leaverton kept a camera close at hand and a journal throughout her deployment. Following the old adage “write what you know,” she found that diving into her memories of her deployment using photgraphy offered the most therapeutic way to heal. 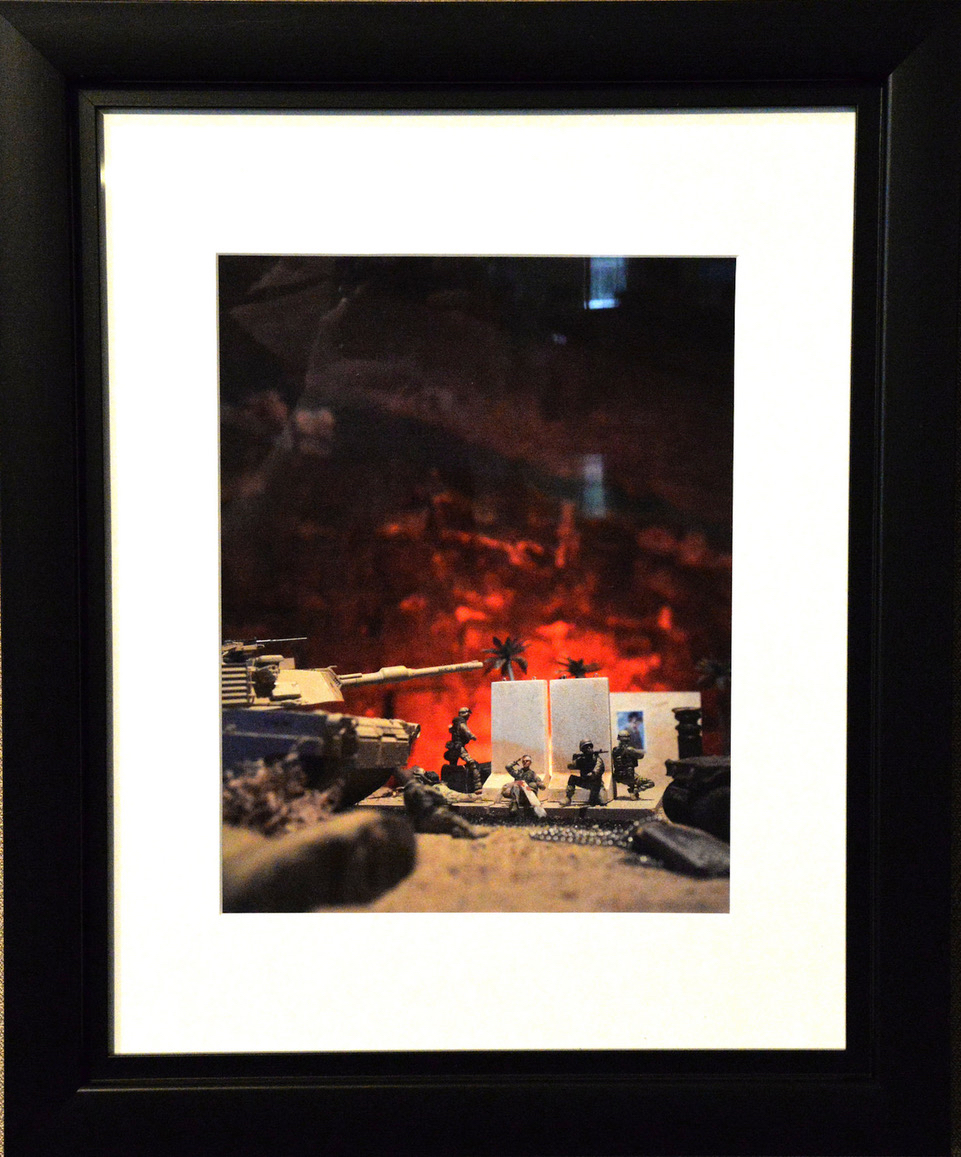 Each scene is made up of small detailed figures, constructed scenery, and various items from the war, like shells, ammo pouches, boots and helmets. Leaverton then lights the dioramas, some parts with a deep blood red, and shoots with a short depth of field, throwing much of the scene into soft-focus and driving your attention to the subject at hand.

Several images utilize appropriated items, such as a boot, or dog tags, or a Fedayeen helmet, as in “Fedayeen Garage,” where the helmet ironically becomes a protective garage for maintenance of Army vehicles. Some use actual journal pages or flyers as part of the maquette. 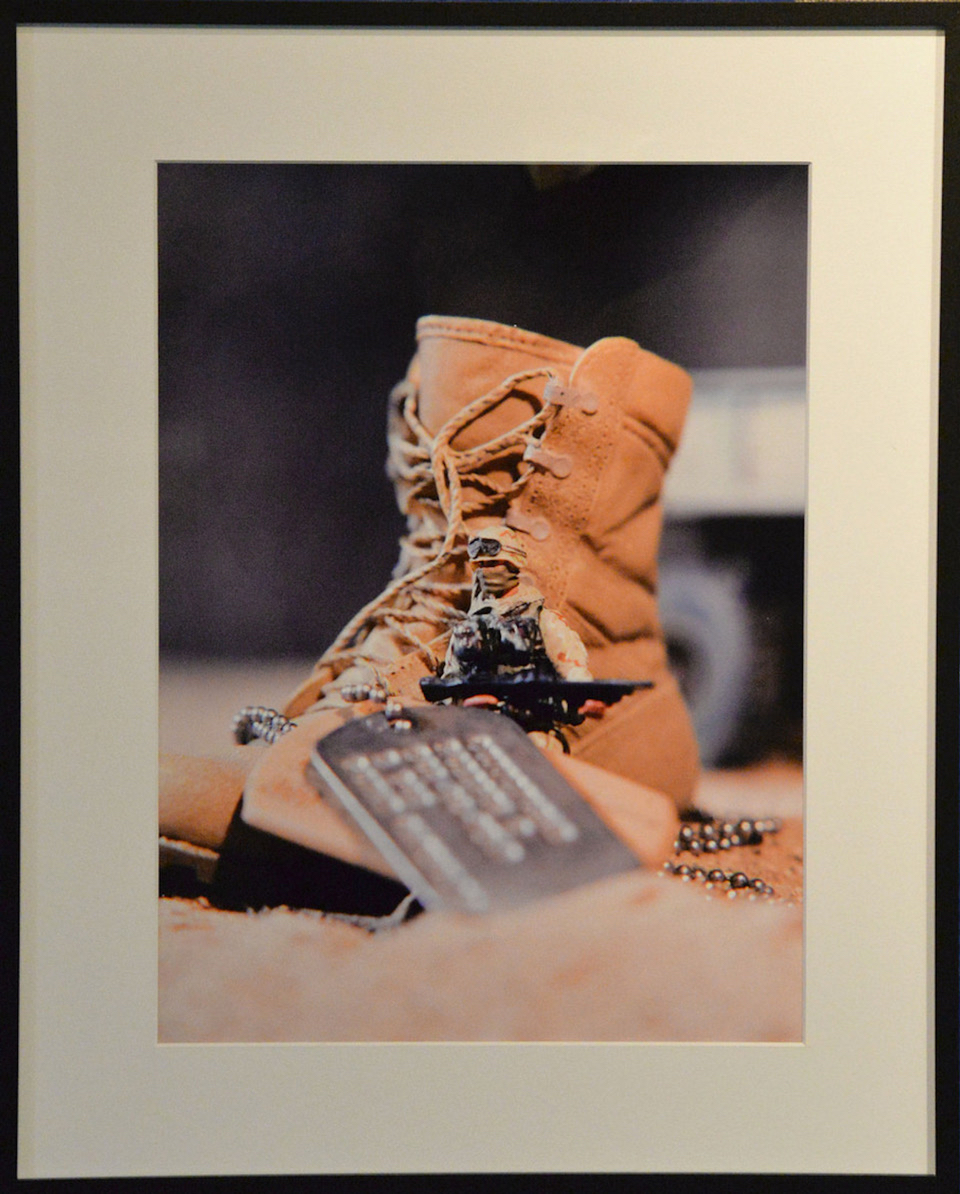 Her deft arrangements are personally symbolic but still very accessible. Leaverton includes in the show individual printed sheets on each diorama, telling the story that served as muse to the image. 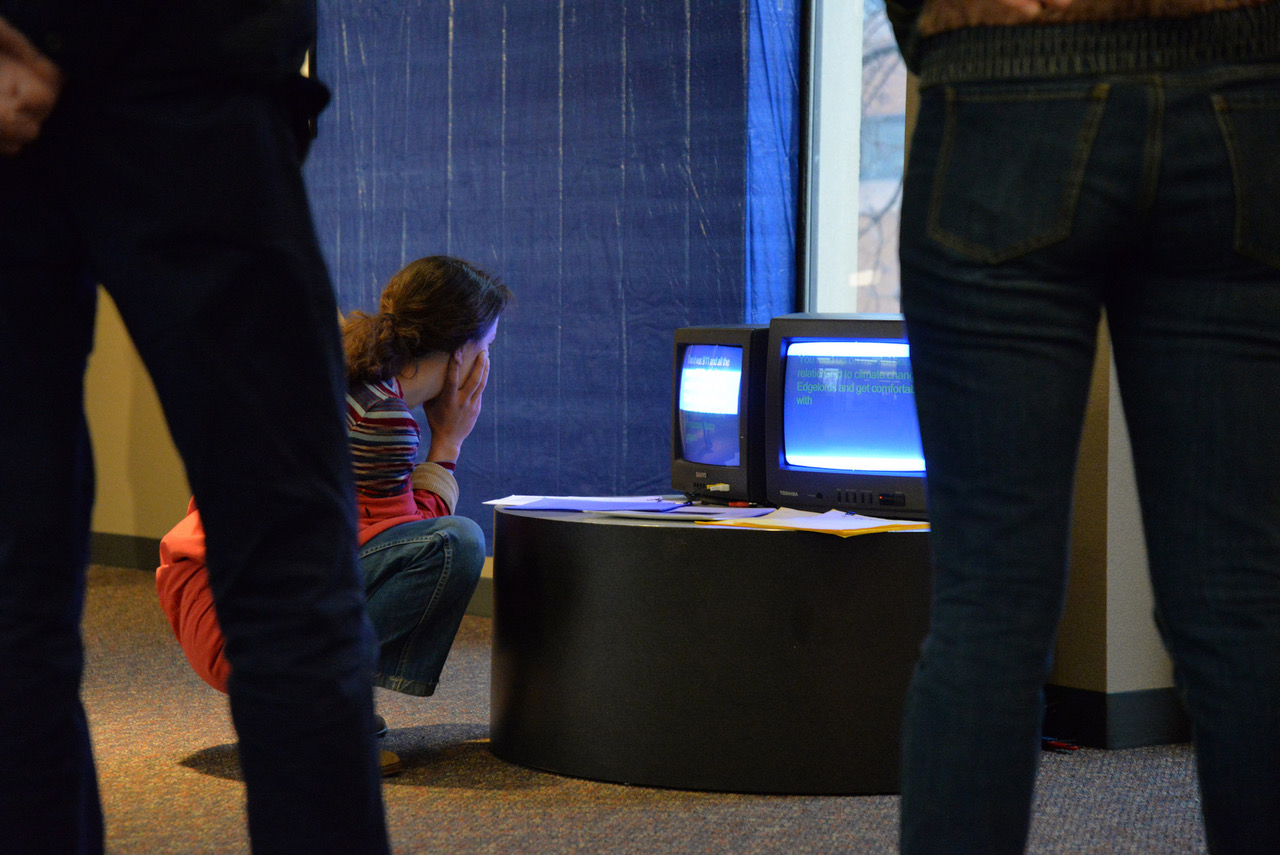 The more relatable of the two, “Love Letters,” has two video monitors repeating a two-minute blast of digital text. The presentation is pedestrian; there is no color other than a blue-gray blank background, with benign white letters popping up in sequence as if being entered by keyboard off in a side room.

Most patrons will happen upon the progress of the typing midstream and will need to stay through two or three rounds of it before it starts to click. The phraseology at first reads cryptically, the storyteller sharing random observations that mean little, some sounding like oddly-worded diary entries. The sentences start to make sense, however, and soon lead us to the gruesome last sentence which solidifies the direction of the narrative.

His prosaic blurbs at first seem to start with commentary on TV and post-9/11 apathy, abruptly turning to murderer Michael Ryan and Rulo cult reminders, ending with the torture killing of James Thimm. Then you remember the Rulo event happened in the 1980’s and some of the earlier entries might reference old television characters and shows, and some facts about the incident in Rulo are missing, and the timeline of these entries is becoming confused. Which may be exactly where this artist wants us. 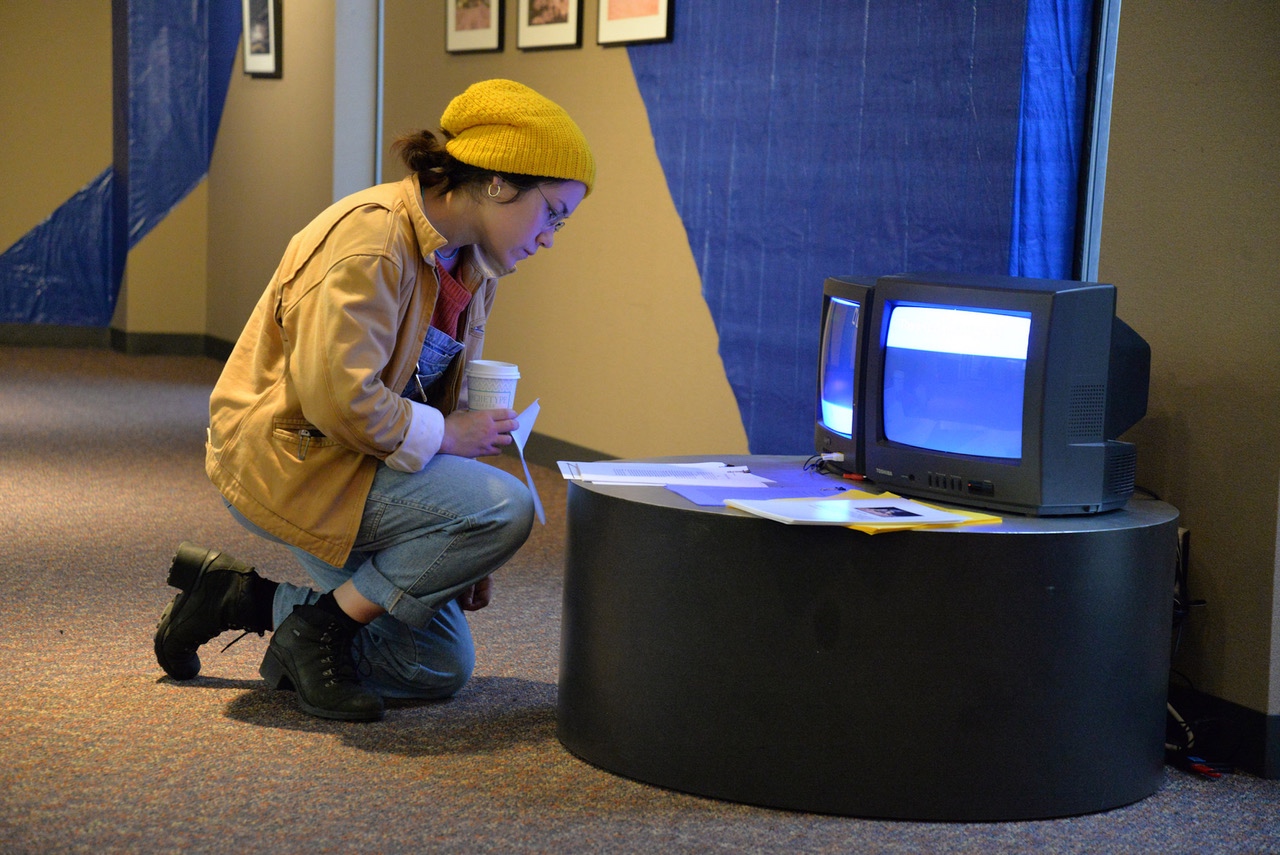 Fankhauser’s biography admits to being brought up on television. Much of his art examines how technology and delivery methods affects our perceptions of news, and the added aspects of distance and time affect the facts of a story.

As part of this “installation,” there are several printouts of writings about the philosophy and study of violence, conflict, and individual and societal reactions. Works such as Hannah Arendt’s The Human Condition, letters between Arendt and philosopher Martin Heidegger, a discussion of Hegel’s Philosophy of Right, each on different color paper; they are all there for the visitor to read if they wish.

Visually, these only add to the ambience of the piece. A quick glance of the titles or some key words will solidify the connection. Any visitor that is familiar with these disquisitions will be that much more appreciative of both artists work.

Fankhauser’s “Bikini Atoll Beach” is a running loop of choppy monochrome background film showing footage of the nuclear tests that occurred on that Marshall Island chain in the 1940’s and 50’s. This is overlaid with primitive animation of a hand (helping?) repeatedly being broken at the wrist, and a figure being wounded and dripping blood. 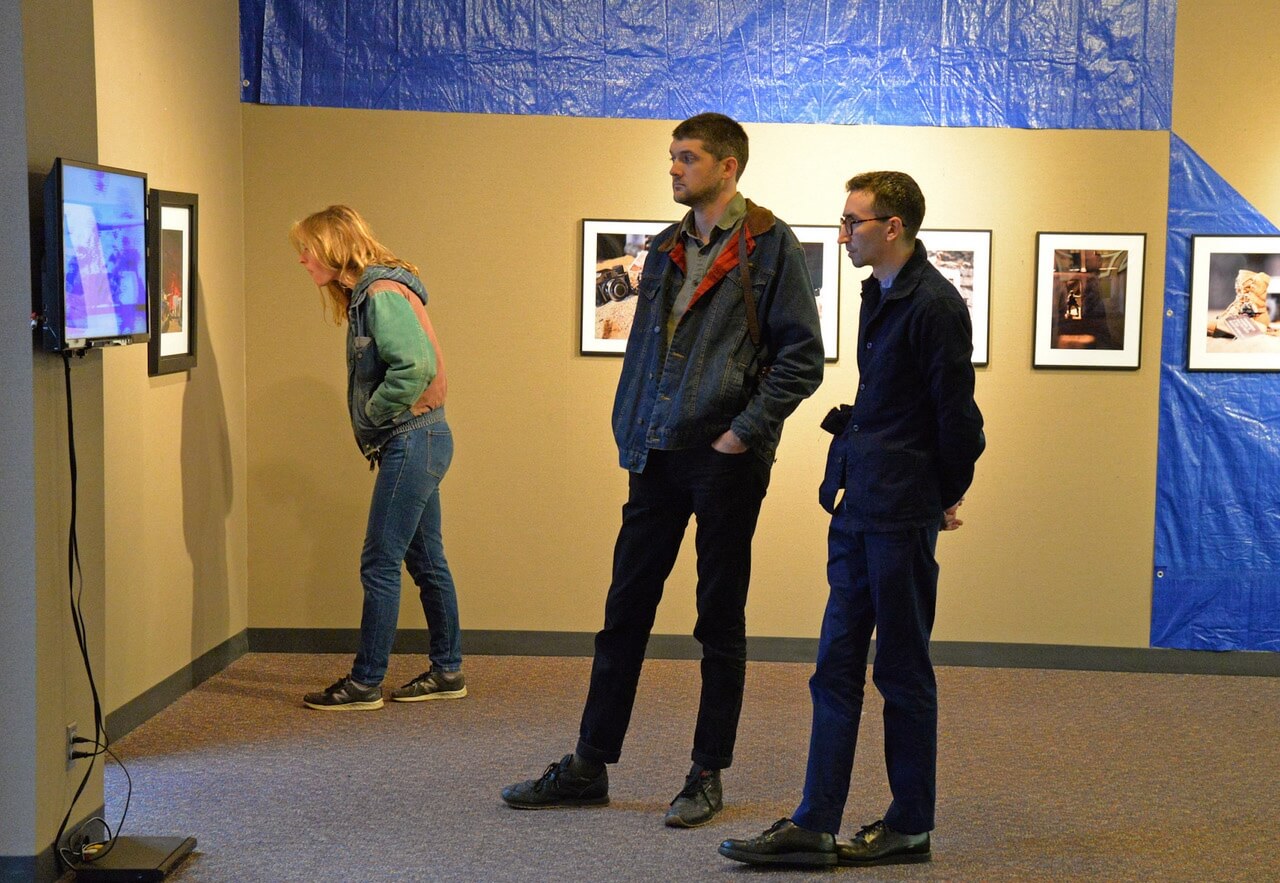 The Bikini Atoll testing included more than 20 nuclear detonations, and the people of the islands were displaced. This was a very small population, but Fankhauser’s illustration of physical displacement is no less grave.

There is quite a lot of narrative that applies to this show. The visual journaling from both artists is inciteful and revealing. The packets of philosophy and critique and such that are strewn about on the monitor table, along with several descriptive sheets for the photographs by Bert Leaverton, should not be overlooked.

Reading the stories that go with Leaverton’s works is enriching and insightful. However, the time and desire needed to go through Heidegger’s and Arendt’s correspondence, or a critique of the Human Condition, even in a library setting, is probably asking too much of most visitors.

Notwithstanding that art is often reduced by excessive explanation from the artist, each written story from Leaverton gave her works some currency and reinforced the healing power of creativity.

The prosaic qualities of Fankhauser’s “Love Letters” first misleads, then drives home the point; our memories, especially those rooted in crime, violence and tragedy, are at the beck and call of technology and media, not to mention time and distance.