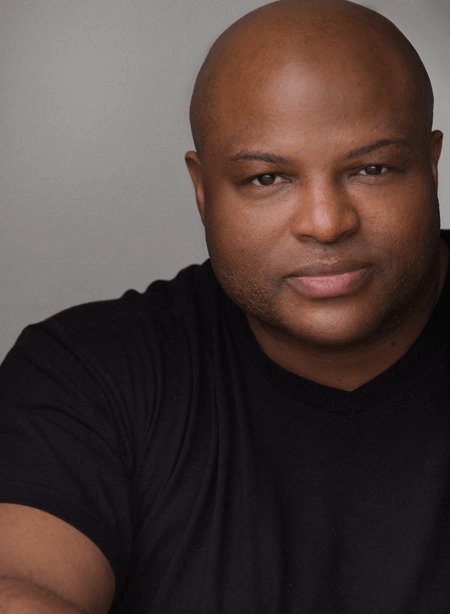 Don’t look now but Michael Beasley is carving out a film-television career rivaling that of his powerhouse father John Beasley (Rudy, The Apostle).

The nearly 20 feature and made-for-TV pics he’s booked the last few years have him on the verge of being one of the industry’s next breakout character actors.

He’s doing it all too from his adopted home of Atlanta, Ga. and surrounding region, together known as Hollywood South for all the productions shooting there.

“It’s really happening here. A lot of work is moving down here,” he says. “I’ve just been blessed to be kind of the big fish in a small pond at the time when it’s starting to rise.”

Papa John says, “He’s been doing quite well. I’m very proud of him.”

Many of Beasley’s supporting roles have been in major Hollywood projects, including, Journey 2: The Mysterious Island, Contraband, The Odd Life of Timothy Green, I Love You Phillip B. Morris and The Great Debaters.

Two of his biggest films, both helmed by name directors, have yet to be released. Flight, directed by Robert Zemeckis and starring Denzel Washington, is due out in November. The Bay, directed by Barry Levinson and starring Kristen Connolly, is slated for an early 2013 release. Then there’s Arthur Newman, Golf Pro .

He has the lead in a new indie film, Mystic Rising, still in post-production..

He’s also guest starred in episodic TV, most recently in USA Network’s Necessary Roughness. He has a recurring role in the Starz Channel’s series Magic City.

Sunday, October 7 is the world premiere of a much anticipated Lifetime movie he’s in, the all-black version of Steel Magnolias. The super cast includes Queen Latifah, Phylicia Rashad, Jill Scott and Alfre Woodard. He plays Spud, the husband of Scott’s character Truvy. He and Scott have some scenes together. He’s also a presence in ensemble scenes. At 6-foot-5, he’s hard to miss.

“It was an amazing experience working with all these legends,” he says. “The energy on the set was awesome. I feel we made another classic.”

“Being able to work with these actors and hold my own with them has given me total confidence I can do it in any setting. I know i can because I’m putting in the work to do what it takes to be prepared for whatever the role is.”

Beasley, who came to acting after a pro basketball career overseas, looks at every set he’s on, whether a commercial (he’s done one with Shaquille O’Neal, TV show or feature, as “a learning experience.” He’s learned the truth behind the adage there’s no such thing as a small part. Every line, gesture, expression counts.

“It’s exciting to me to get on the set. It’s not like a, Oh-here-we- go-again type of thing. It’s basically a feeling of, ‘Hey, I’m getting paid to do this?’ I think every set is important because I’m learning and building relationships, and so every chance I can be on the set helps me hone my craft.”

Sometimes he talks shop, as he did with Michael Caine and Luis Guzman on Journey 2. Then there’s the fountain of experience he draws from his father, whose extensive film-TV credits are two decades long.

“I’ve always got my father to fall back on and ask, ‘What can I do?’ and with his wealth of knowledge he helps. I was able to see my father’s career and whatever he did, good or bad, and say, ‘I can do this and do it different.'”

Father-son have worked together a few times, mostly at the John Beasley Theater & Workshop in South Omaha, where Michael’s brother, Tyrone, is artistic director. Michael’s smart enough to know that when surrounded by serious, veteran talent it’s best to be a sponge.

“Yeah, it’s a blessing and I look at it as basically on-the-job training. As soon as I shoot my scenes I run to the monitor to see what these guys are doing. John Goodman is amazing. I mean, I knew his acting was amazing but when you see him do stuff in person, it’s like, ‘Wow.’ It’s stuff you can’t really get in a classroom setting, I don’t think. These guys are actually doing it for real and it works for them.

“It’s seeing what their process is and how they pay attention to detail. They really bring a lot more to just the words on the page. Even working with my father it’s the same way. Unfortunately, I’m down here and he’s up in Omaha. We haven’t been on a set together as far as a movie (though that’s a goal of each).”

Even when he’s not “working,” Beasley’s still working it.

“I’m always studying my craft. Even when I’m out in public I’m watching what people do and trying to take from that. I’ve always been like a student of the game.”

Steel Magnolias marked his second time acting with Woodard after American Violet, and his first with director Kenny Leon, who’s directed his father on stage in several August Wilson productions.

Leon says, “Michael’s a very talented young man, I guess it’s in the blood. He really delivered for me in the film. It’s a really honest portrayal. Everybody wants to know, ‘Who’s that guy? Where’d he come from?’” Leon says the apple hasn’t fallen far from the tree. “Both John and Michael are authentic. They both bring it from an organic place. They’re just being. There’s no tricks. They find a simplicity to the life of the people they portray. It’s honest, it’s real, and you can’t teach that.”

He sees big things ahead for the son. “Michael can do anything he wants.”

Every new relationship Beasley cultivates and every new credit he adds to his IMDB page only reinforces his reputation as the hardest working actor around. It’s been one project after another.

His goal’s to become a familiar face and name to TV-film viewers and an in-demand talent producers and directors seek out.

“I think I am on the radar. It only takes one movie for you to become famous.”

In no sense does he feel he’s arrived yet.

“Every year I’m like, OK, what can I do that I haven’t done to get me closer to my goal? Every day I try to figure out something I can do, even if I only have an hour to do it. I can read this book or I can workout to enhance my look or I can work on an accent. Whatever I need to I just  find a way to do it.”

He hopes to inspire other others to follow their dreams.

“I want people to know it’s a matter of deciding, whatever your dream is, to just go after it and don’t be afraid of failure. That’s what I’m doing, I’m going after my dream, I’m not changing, and I’m going to get it.

“I just have this drive. Whatever it is I do I try to be the best at it. Otherwise, I’m wasting my time in my opinion.”