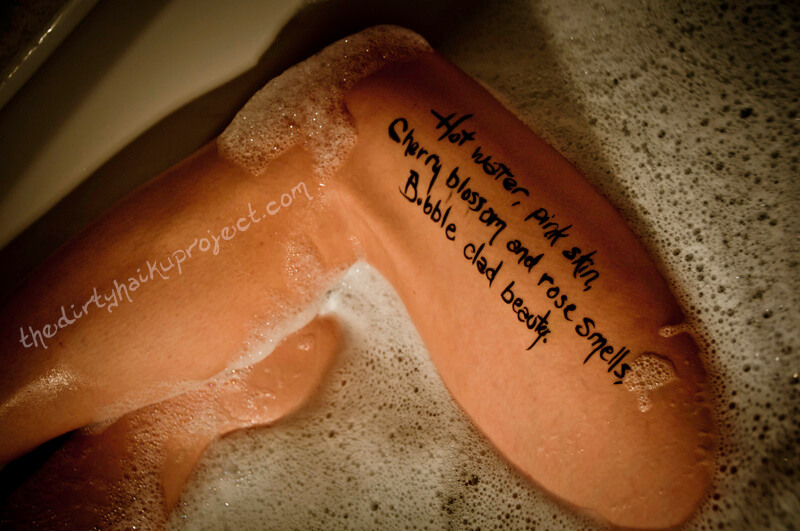 “It is not easy, to think about you always, I am left bereft.” Poet Heather Sticka’s favorite of her “Dirty Haiku Project”—not as sexy as some—“Hot water, pink skin, cherry blossom and rose smells, Bubble clad beauty;” “Your kiss surprises. Push me up against the wall. Take me. Oh, god…Yes…” Last winter, Lincoln-based musician (Tsumi) Sticka began writing the sensual prose via text message to cheer up a friend, and found it “super fun.” She then wrote more in a red leather book and read them to her friends, whose “blood rose to their cheeks.” Encouraged, she took a step further by writing it on her friends—literally—text about the body on their barely clad bodies—to be captured by photographer Rob Liliedahl. Since then, Sticka’s had five photo shoots with over 40 volunteer models, a photo exhibit at Jake’s Cigars in Lincoln, with eight more shoots scheduled. July 6. she’s presenting her first (and perhaps only) live-photo shoot at House of Loom during their monthly “Omaha First Friday Wrap Party.” Models (male and female) will pose in underwear as Sticka writes her original poetry on their skin, with Liliedahl recording it in the space that is known for its charming environment. For those who can’t see the shoot up close, a videographer screens it live in the bar. Though her passion project, Sticka admits its an expensive one; with printing, photography time, hopefully merchandise and the goal to travel the country with the art show, Sticka needs to raise $4,000 by July 14 to move forward. Her video on kickstarter.com tells her story with a graphic explanatory video to boot. Visit thedirtyhaikuproject.com for details. The live shoot takes place July 6 from 9pm1-a.m. at House of Loom, 1012 S. 10th St. houseofloom.com. At House of Loom June 27, Drink n Draw Omaha hosts “Deluxe Summer edition,” with three models and extra space to create. facebook.com/drinkndrawomaha.

Sculpture by Paul Konchagulian is being exhibited in the Fred Simon Gallery thru July 13. The New York born artist’s vision is “to explore the softer, more malleable side of steel’s properties while still maintaining its visual presence and strength.” The abstract sculptures can also be seen throughout Omaha (in Gene Leahy Mall, for example) as he regularly teams up with local architects and developers to create custom work.