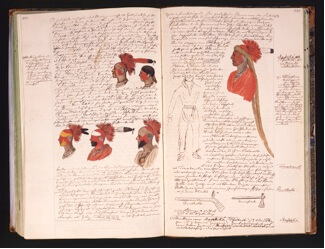 Joslyn Art Museum announced the completion of their multiyear project translating the Old German journals of Prince Maximilian of Wied (explorer of the interior of North America in the early 1830s with Swiss artist Karl Bodmer). To celebrate the project that has received international interest due to the significance of the historical documents, the Museum is hosting a public symposium Sept. 22 with speakers: Stephen S. Witte (co-editor of “Price Maximilian and the Transformation of the Upper Missouri Basin” journals); Adam Harris (curator of art at the National Museum of Wildlife Art); Maureen Boyle, (PhD candidate at Indiana University researching Maximilian); Mace Hack (Nebraska state director of the Nature Conservancy); and Toby Jurovics (Joslyn’s chief curator). The symposium is free with admission and runs 1-4pm. The three volumes of The North American Journals of Prince Maximilian of Wied are available at bookstores nationwide including Joslyn Art Museum’s Hitchcock Museum Shop. Joslyn.org.

Sept. 20, El Museo Latino opens “Agents of Change: Mexican Muralists and New Deal Artists,” featuring a selection of works from the Sheldon Museum of Art. Included in the exhibition will be the work of the Three Greats: Diego Rivera, Jose Orozco and David Siquieros who came to the United States in the 1930s and painted murals, conducted workshops and mentored American artists. It will also include other important Mexican Muralists whose names are less recognized. Elmuseolatino.org.