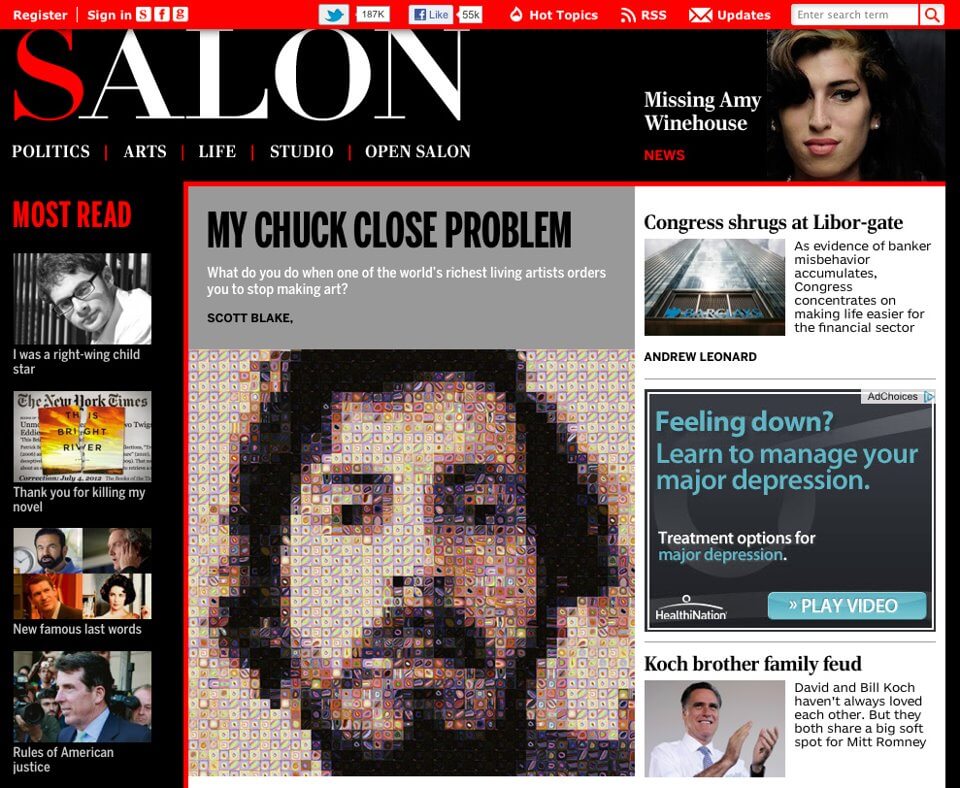 Justin Beller is exhibiting multi-media paintings, wall installations and “plinth-like towers” at Curbside Clothing in the Old Market thru the month of July. Curbsideclothing.com.

Artist Jess Benjamin opens her own studio in Benson for ThinkTank, a five-day workshop with five artists and academics who will initiate conversation and work. The community is encouraged to follow and offer opinions or take photographs of their own definition of “work” to post on the ThinkTank Facebook page for the five including ceramicist Benjamin, sculptor Sayaka Ganz of Fort Wayne, Indiana; Creighton University ethicist Anne Ozar; Emerging Terrain Director Anne Trumble and Creighton University philosopher Amy Wendling. The members will host a gallery reception August 3,  6-9pm, Work: In Progress, at the Studio at 6523 Maple Street. Jessbenjamin.com.

Omaha-based artist Scott Blake, known for his Barcode Art, has garnered some web presence as of late for “Omaha Swimmer vs. Scott Blake,” the photograph (by Omaha photographer Daniel Muller) and video taken of Blake in swim briefs clutching his large penis sculpture posing in front of the large swimmer’s face in front of Mutual of Omaha. Comedy Central’s Tosh.O blogged about it as did Jockular.com and others. The provocative artist who has been “dicking around” with public art since 2007, is selling signed prints (along with the infamous sculpture) on his website barcodeart.com. Just this week, another noteriety story by Blake was posted by the artist on Hyperallergic about his “Chuck Close Problem.” The story is about his run-in with the artist in 2007 in regards to Blake’s “Chuck Close Filter” — which took photos and makes mosaics out of them, in the style of Close’s famous paintings. Close requested the- close down- of the Filter, and Blake obliged, but plans to reopen it 100 years after the artist’s death (Close just turned 72 on July 5). The full story write-up by Blake was noticed and since he’s been interviewed by Wired, Techdirt and picked up by salon.com.  Currently, he’s exhibiting with Atlanta-based artist Maria Raquel Cochez in “Little Fat Girl“ at Los del Patio in Panama City thru July. He’ll head to the Smithsonian American Art Museum in Washington DC for the 15th anniversary of Art-O-Mat, the national project converting retired cigarette vending machines into vending art that he has been a strong proponent for (one can be found in Bemis Underground). He will also be giving a flipbook workshop as part of the celebration. Barcodeart.com.

Silver of Oz Gallery, formerly of Benson, recently relocated to a larger space in Montclair Center at 130th and Center. The gallery, featuring handcrafted silversmith jewelry by storeowner Levent Oz, will expand its offerings to include Turkish import carpets, pottery and textiles along with other high-end vintage and estate jewelry. Visit silverofoz.com for more information.