The debut book from Martin Bruckner, “I Love You with All My Butt!: An Illustrated Book of Big Thoughts from Little Kids,” cleverly highlights the funny, sad, ridiculous, and, sometimes, creepy things young children say.

“The title is really just a little kid who is so excited to tell her parents something sweet, but she made a mistake, and it came out butt rather than heart. It’s just so sweet, which is essentially the essence of the whole book,” says Martin.

The novelty book illuminates the brilliant and beautiful ways children see their world, and how the adults in their lives respond to it. The Omaha native, known as Spaghetti Toes, first created an illustrated book of silly sayings, and presented it to his wife as a Mother’s Day gift, which is where the food-themed moniker began.

When their daughter, Harper, was 2 she decided to play with her dinner rather than eat it. Martin overheard his wife say, “Please don’t put spaghetti between your toes!” The phrase left a lasting image in Martin’s mind, which inspired him to not only write down the quips and phrases of family life, but also illustrate them.

“My daughter is very witty, and sensitive. My wife, is very witty, and tells it like it is. Between the two of them I never run out of content,” said Martin during a recent phone interview. He said he has 200 quotes from his family written down, which are still waiting for him to add his artistic interpretation.

Word of the clever and heart-felt gift idea quickly spread among friends and family via social media, and eventually multiple online and traditional media sources including Today, Babycenter.com, CNN, BuzzFeed and the Huffington Post picked up his story. Soon, people from around the world wrote to him asking that he create custom prints of the sweet, silly and sad things that tumbled from the mouths of their own children. From the culmination of personal quotes and those from parents near and far Martin created, “I Love You with All My Butt!” which will be released by Workman Publishing on April 7. 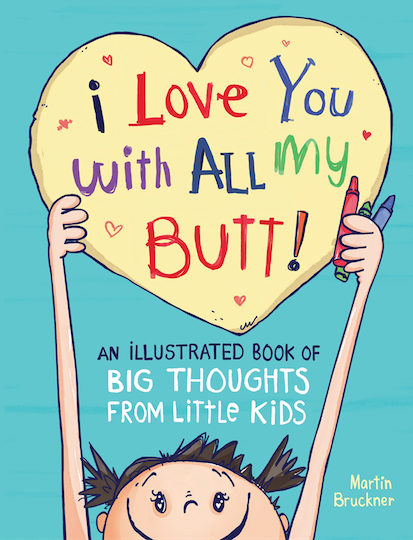 He and his wife, Michelle, both have design backgrounds, and had collaborated on other projects in the past, including Creatureland Studios, where Martin essentially acted as a colorist for a child’s original artwork and Harp and Squirrel on Etsy, where they sell prints, pacifiers and burp cloths, among other creative takes on the tools we need to raise children.

For Martin, Michelle and Harper art and creativity is a truly a group effort, and he expects the family business to evolve as their daughter grows.

“She’s five now, so she doesn’t stumble over words, and ideas like she used too. She has a stronger command of language. She’s also becoming more of her own person, and I’m careful of how much of her life I put out there in the world,” said Martin. “I see us collaborating on projects as she grows up, rather than just illustrating the things she says.”

A quick check of the Spaghetti Toes Instagram feed or Facebook page shows places where he and his daughter work together on prints about Spiderman and colorful dinner plates about Harper’s latest obsession, Teen Titans. She often draws the outlines while her dad colors them.

Spaghetti-Toes is a side hustle for Martin, who spends his days working as the Art Director for Wes and Willy, a boys clothing company.

“I do all of my work for Spaghetti-Toes in my basement with Harper dancing nearby, and Michelle is always crafting something, so even though this has been my nights and weekends for the last three years, we are all together and we are all part of this. I think that’s what makes it so special.”

To find out more about Martin Bruckner visit his website www.spaghetti-toes.com

or follow him on Instagram at spaghettitoesdad. You can preorder I Love You with All My Butt: An Illustrated Book of Big Thoughts from Little Kids at The Book Worm in Omaha, NE or online at Amazon.com