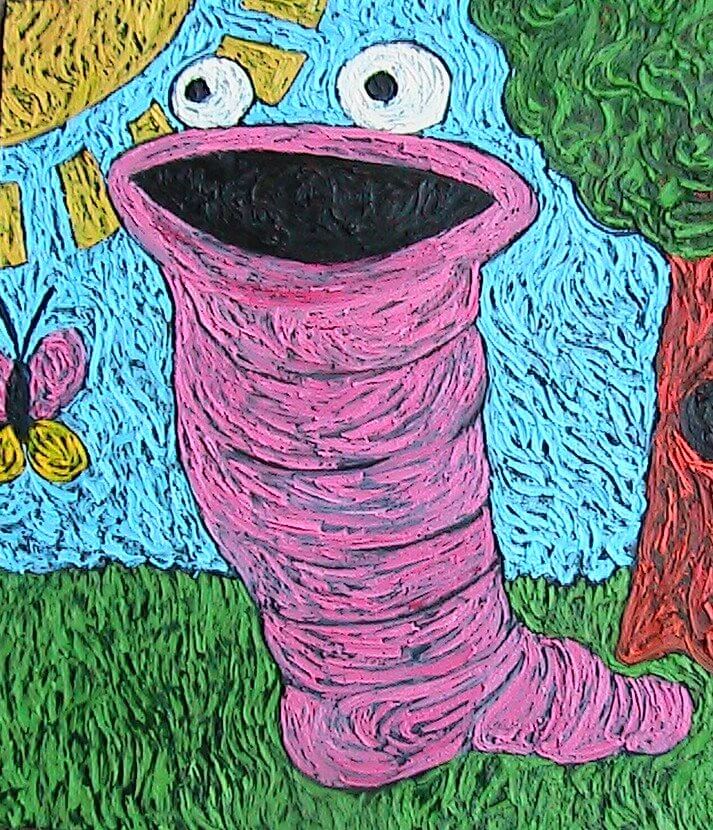 Mike Loftus showing seven mostly recent paintings at the Old Dundee thru December. As per typical for the artist, themes vary from grave to playful.  “Portrait of a Suicide,” is a morbid dark-toned image of a pale figure adorned with a blue human heart and staring red eyes, clasping hands in prayer. “The Pink Leech,” inspired by drawings by his two oldest daughters, is seemingly lighthearted; a comical fat, pink leech and a butterfly on bright green grass in front of a shining sun. The contrasting duo, according to the artist, was painted in close timing proximity, a testament to his changeable painterly perspective. Search for Old Dundee on Facebook.

Omaha-based artist Jess Benjamin was recently featured on the National Drought Mitigation Center website for her sculpture of the U.S. Drought Monitor. Benjamin’s representation of the Sept. 18, 2012, Monitor of water molecules was shaped from clay. According to the article, with her art, Benjamin aims to ignite more public conversation on the topic of water and drought. Jessbenjamin.com.

Omaha-based artist Scott Blake’s work spans the nation. His “9/11 Flipbook” is in San Francisco Gallery Carte Blanche’s “Survey of Documentary Styles in Early 21st Century Photobooks” with 69 other artists’ books focusing on photography and self-publishing. In Washington DC, his “QR Code Amy Goodman” is featured in PALIMPSEST at Washington Project for the Arts, a show featuring artwork that was whitewashed or otherwise obliterated before a QR code was painted on the cleaned surface. His notorious “Omaha Swimmer vs. Scott Blake” photograph and “9/11 Flipbook” is in HUMOR; ANALOG HUMOR, an exhibit at Tipton Gallery at East Tennessee State University where the art was required to make the curator laugh. Barcordeart.com.

At Kent Bellows Studio and Center for Visual Arts, “Future Artifacts: Weston Thomson” opens Nov. 2. The show features a collection of objects and images; many created using 3D printers and laser cutters, resulting from the ethnographic study of an imagined future society. Other media: wood, steel, sandstone and a series of painted illustrations depicting the process of imaging the fictional society from which the artifacts emerged. Kentbellows.org.

Check out thereader.com for Mike Krainak’s review of Bemis Art Auction and more.