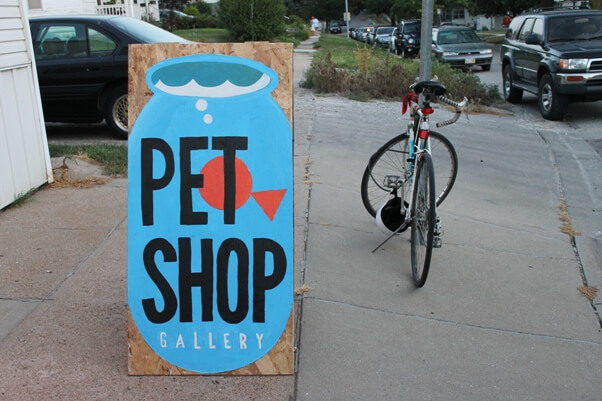 Omaha’s creative energy in the visual arts, truly the gift which keeps giving, continues to thrive in a variety of relatively new venues outside of the mainstream. The Petshop gallery and workspace at 2725 N. 62nd St. will be featuring the work of Jake Gillespie and Christina Renfer Vogel, opening Dec. 7, 7 -10 p.m, during Benson First Friday. This is the seventh exhibition for Petshop, co-founded by Jamie Danielle Hardy, Alex Jochim, and Ben McQuillan. “We’re facilitators for the practice of art making in the community,” said McQuillan, whose own BFA exhibition is on view at the UNO Art Gallery through Dec. 13, 2012. Hardy and McQuillan both agreed that curating younger, emerging artists brings a vital energy and connection to their own art practices. “We want Petshop to be a pillar for the growth of this new young art scene,” said Hardy, whose thoughtful installations in REVEL, her first solo show, were featured at the New BLK Gallery in early November. Tana Quincy’s TENTS opens Dec. 7, 6 – 9 pm, at the MAUD Boutique 521 N. 33rd St. “Tana Quincy’s exhibition of paintings will be Maud’s third art show since opening in August,” said Lynn Mills, Shopkeeper. “The space is an experiment,” said Mills. “Art lends itself to clothing. The shop supports local designers, including two from Omaha Fashion Week.  Maud carries hats, dresses, and scarves, among other items.” Another shop, the Sweatshop gallery, 2727 N. 62nd St. will be continuing renovations to their Benson space with the $1,800 they won at Bemis Center’s FEA$T (Funding Emerging Artists with Sustainable Tactics) Nov. 17. “The walls are up. The renovation is community driven, hiring local skilled crafts people,” said Jamie Hardy, one of the six co-founders. Photographer Shannon Claire’s Festivus Show is Sweatshop’s next featured exhibition, opening Dec. 7, 7 – 10 pm, during Benson First Friday.