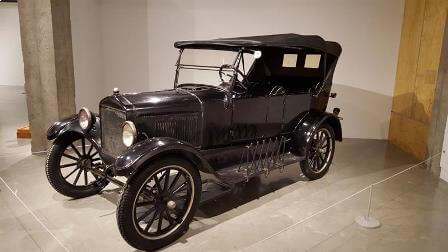 The sleek, silvery blue of the 1967 Jaguar XK-E only seems to reinforce the fact that this car was built to drive like the wind. Literally.

With its elongated front end and curvy lines along the rear fender, the E-Type Jaguar (1967) was considered by many to be the perfect sports car. And today, it is also considered a work of art.

“This is definitely a James Bond car,” said Erin Painter, a student worker and library aide at KANEKO’s Library.

Omahans can see this and other wheeled works of art at KANEKO’s Bow Truss Space. From a restored 1948 Schwinn bicycle, to the aforementioned Jaguar, to multiple Andy Warhol prints of classic cars, the show offers a little something for everyone.

But the main draw is the 13 featured cars.

The dissected Ford Model T (1908-1927) is one of the most compelling pieces in the exhibit. Located in one of the side rooms, along with a fully constructed Model T and a Golden Eagle Model T racer, the eye is still immediately drawn to this skeleton of a car.

With different parts highlighted by bright, primary colors of yellow, blue and red, the overall look is almost childlike, reminiscent of car kits and Legos.

In fact, when viewing the piece from the front, with the left headlight exposed like a googly eye, it takes on an almost cartoonish quality. One can almost picture what it would sound like if it were featured in Disney’s “Cars” movies.

Located in the larger room that smelled faintly like a garage, but not as dirty, the pastel yellow Messerschmitt KR200 (1955-1964) was a different kind of marvel. If the Jaguar evokes images of Bond racing down a mountainside highway, this one will probably bring to mind Cousin Itt, who actually drove this model on “The Addams Family” show.

This diminutive three-wheeled car, designed by German aircraft engineer Fritz Fend, was originally intended for wounded veterans. Initially built like a tricycle, it had one wheel in front and two in back. Fend later moved the two wheels to the front, to better help with steering.

The Messerschmitt designs were unique in their use of a monocoque exterior, meaning the structure is supported by its external “skin,” much like an eggshell. Perhaps that’s why this car offers a more delicate quality than the others featured. Well, that and its size.

With its transparent bubble top and short, narrow body, it’s easy to see why some people might not take this car seriously. But in reality, the Messerschmitt was ahead of its time.

“This clever car of the 1950’s is the original smart car,” says Jasper Gerard, a classic car columnist, in a museum placard.

Next to the small, Minion-like car is the Kaiser Darrin (1954), a rare, sporty convertible cruiser, seems like a behemoth.

The beautiful, long grooves of the car looks like too-perfect waves, interrupted only when the unique sliding doors retreat into the fender wells. While the tapering back may look like others of its time, the front is definitely distinctive.

Starting at each headlight, the front of the hood arches upward and then back down to the center, meeting in the middle like an upper lip. In fact, it is often described as having a “pursed lip” look, as if it wants to kiss you.

Though the name may sound German in origin, the car is named after its American designer, Howard “Dutch” Darrin and its American producer, the Kaiser-Frazer Corp. The characteristic spot where the front and rear fenders meet at the edge of the doors, creating that wave-like effect, became Darrin’s trademark.

This is the Dick Tracy car of the lot. Though it doesn’t look like the car in the 1990 movie, it’s easy to imagine Madonna stepping out of if the crabapple green car decked out in an inky, black dress.

In keeping with the sexy dame theme, this last car is the piece de resistance in the collection. With its aggressive front bumpers framing the headlights and curving back along the side to form a dramatic point, this piece is hard to ignore. Its rear end repeats the curvy lines, though in shorter form.

According to the placards at KANEKO, these lovely shapes are known as “Goutte d’Eau” or “Teardrop.” The car is the 1937 Talbot-Lago Teardrop Coupe.

Perhaps that’s why this car caused Painter to declare, “It’s a villain’s car. Like, a Sin City villain.”

Indeed, this car immediately inspires a sense of danger, and at the same time, a sense of sadness. Sadness that only 14 of these hand-crafted, voluptuous cars were made.

The car’s Italian designer, Guiseppe Figoni, immigrated to France with his family as a young boy. He started his career as an apprentice wagon builder and eventually opened his own body shop outside Paris after World War II. He passed away in 1978 after changing the European auto industry with his sinewy designs.

An artist first, Figoni began his creative processes with sketches, and then carefully sculpt each car from iron, wood and sheet metal. He liked experimenting with the new, metallic two and three tone paint finishes.

Figoni also loved working with designers of high fashion to create clothing that matched his cars, reflecting the colors and lines found in them, proving that works of art can connect across the board. Even a dashboard.

Like Fagoni trying to connect his designs with the fashion world, the KANEKO Gallery tries to connect people who may not normally go to art shows with different forms and interpretations of art.

The goal of the “Design In Motion” exhibit was to show how each car is a unique and compelling work of art. They reached it.