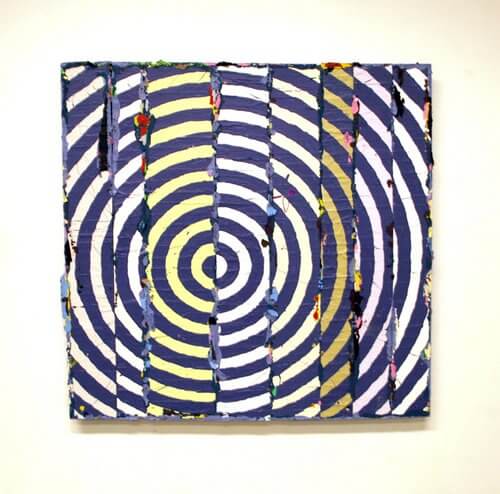 On a four-year Omaha hiatus, recent University of Minnesota MFA graduate Bart Vargas is back residing and creating in Council Bluffs. After a whirlwind international tour of exhibitions, he just got a gig instructing art at Metropolitan Community College, will be an official mentor for The Kent Bellows Studio and Center for Visual Arts and is now exhibiting nine of his recent works that have never been shown locally at Barley’s Bar and Grill in Council Bluffs through Mar. 10 in Bursts & Bullseyes. Vargas said, “Barley’s is a popular bar and restaurant near down town Council Bluffs, with really good traffic, allowing many to see my art that might not necessarily do so…Both Barley’s and my new studio are in Council Bluffs. This is hopefully just the first non-traditional show I want to do in the greater Omaha/Council Bluffs area, but I wanted the first to be in CB.” Catch up with Vargas at bartvargas.com.

Last weekend at the Fred Simon Gallery, A Part of the Whole opened, featuring mixed-media work by Susan Hart on view through Mar. 23. “My work is reflective of what I enjoy most, the creative process, how it answers the stirring in my soul and the ability it has to move me in a new direction…I am fascinated with how the viewer relates to my work. It is through this dialog and relationship building that my creativity grows and flourishes,” Hart wrote in her statement. More information:  nebraskaartscouncil.org.

On Feb. 24 at 7:30p.m., NET Television’s “Nebraska Stories” will air KANEKO’s multi-media performance, PORTALS. Shot at KANEKO, the story follows the collaborative efforts of acclaimed violin virtuoso Tim Fain from New York City and a young filmmaker, Kate Hackett, from Los Angeles working with a team to challenge the definition of a 21st century concert experience. The multi-media production PORTALS blended a live performance by Fain with filmed performances of music, poetry and dance. The performance was followed by a social media talkback session with audience members at the nearby Nomad Lounge who watched via a live Internet stream offering feedback and questions in the form of texts and tweets. See more at Netnebraska.org. KANEKO was also recently awarded a Peter Kiewit Foundation challenge grant of $100,000 to support their 2012-13 program series exploring creativity as a lens to better understand our world. Thekaneko.org.

In January, the Omaha Young Arts Administrators brought together 60 members of the Omaha cultural community at Bemis Center for Contemporary Arts to discuss the needs and potential future of Omaha’s cultural community. Among the ideas brought to the table: increase efforts to crow-promote organizations, invigorate the public art program, strengthen critical voices through creating a Critic Laureate role, conduct advocacy training session for arts organizations and bringing artsts into neighborhoods beyond downtown. The discussion will continue and anyone interesting in partaking is encouraged to contact oyaa.omaha@gmail.com.