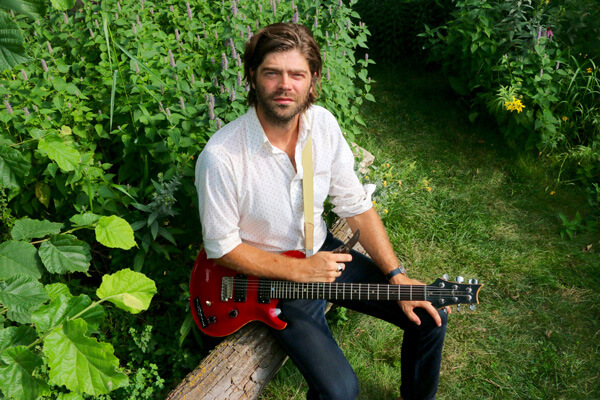 He may not have superpowers, but Dapose shares at least one characteristic with any number of comic book heroes — that of maintaining dual identities.

By day he is simply Michael Dappen, the mild-mannered guy slinging mulch at Indian Creek Nursery or maybe toiling away in some pastoral site as a landscaper under the guise of The Natural Gardener.

But under the cloak of darkness he becomes something entirely “other.” He morphs (Shazam!) into Dapose, guitarist for the synth-fueled Saddle Creek Records band, The Faint.

All three identities collide in a backyard garden that juxtaposes zen against zinnias and Zildijans. 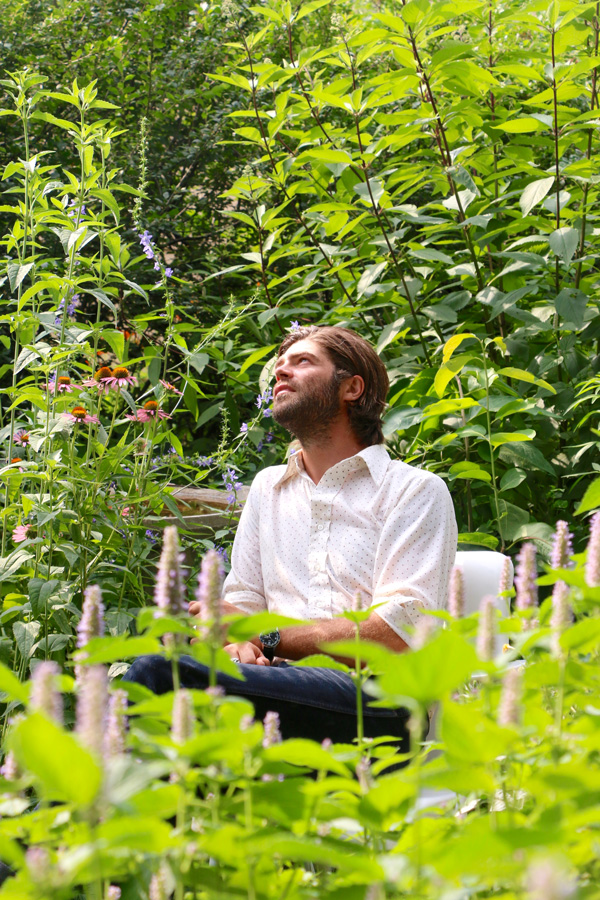 Dapose is something of an accidental gardener. He has no formal training, but became interested after moving about 10 years ago into the Dundee home near Elmwood Park he shares with Erinn Tighe.

“It’s just a standard city lot,” Dapose said, “but here I was thinking how we owned all this property now, but didn’t know what to do with it. To me it just seemed like … work … just something to mow. Now we think of the garden as additional living space, an extension of home.”

The self-taught gardener began his studies by amassing a voluminous library of all things botanical. He soon even sought a job at the neighborhood nursery to soak up additional skills and knowledge.

But don’t look for Dapose’s garden to be featured anytime soon on the annual Monroe-Meyer Guild Garden Walk. As opposed to more formal spaces, ones whose sole purpose is to be a thing of beauty, this rock’n’roll gardener’s philosophy is planted firmly in the tenets of permaculture, a system of agricultural and social design principles centered on stimulating or directly utilizing the patterns and features found in natural ecosystems.

Dapose’s decidedly understated creative style in “putting things together in interesting ways” does not involve an overabundance of planning. He does not maintain detailed schematic drawings to keep track of what’s planted where and instead prefers a more naturalistic approach. Human intervention in this garden is minimal, and he most often prefers to let plants reseed themselves at will.

“I just try to put plants where I think they’d be happiest,” he said while harvesting a handful of seeds from a plant before casually strewing them in another, seemingly mismatched, incongruous area of the garden. “I love the aesthetic of plants just doing what they are supposed to do. I don’t try to force anything into its place.”

Is there a correlation between Michael Dappen, the gardener, and Dapose, the rocker? Do their character’s universes ever intersect? And if so, is there a cataclysmic rip in the space-time continuum?

“The vibe of the garden follows the same creative process as composing music,” Dapose explained. “I’ve become much more interested lately in improvised music … noise music … experimental music. It’s a new exploration of sound that parallels what I do in the garden. It’s like planting a seed — usually just a single, solitary sound or noise starts everything off — and then seeing what happens from there. Yes, I initiate it. I start the process. But it’s the waiting that matters. Waiting for that next sound to follow when I’m making music. Waiting for that seed to sprout when I’m in the garden.”

The result is a five-senses space of variegated greenery that leans more to “prairie” and less to “pizzazz.”

Birds, bees and squirrels that feast in the garden provide a soundtrack for butterflies performing an aerial ballet above sweet-scented plantings that offer an array of tasty snacks in a garden that begs to be touched.

The tactile merged with the aromatic when Dapose had me sweep my hands across the tendrils of a certain plant to see if I could guess its name. One whiff of my fingers gave me the answer. Of course! A popcorn plant! At each stop in the garden tour Dapose urged me to touch, to smell, to taste.

But what about when the band is touring? What happens when The Faint takes the First Avenue stage in Minneapolis this September to kick off a national tour that culminates back in Omaha with a gig at Sokol Auditorium on Halloween?

“The garden is very low-maintence. Rainwater will still collect here when I’m gone,” he said in gesturing to a large barrel. “Some plants may struggle. Others may die altogether.” That, too, he explained, is all part of letting Mother Nature guide his densely packed lushness with minimal interference from some guy with a guitar.

Ever so deftly, he inched up to a stout bumblebee resting atop a vibrant  bloom and, with thumb and forefinger, gave its gossamer wings and fuzzy, black-yellow-black torso a gentle massage.

Hey, maybe this guy has superpowers after all.