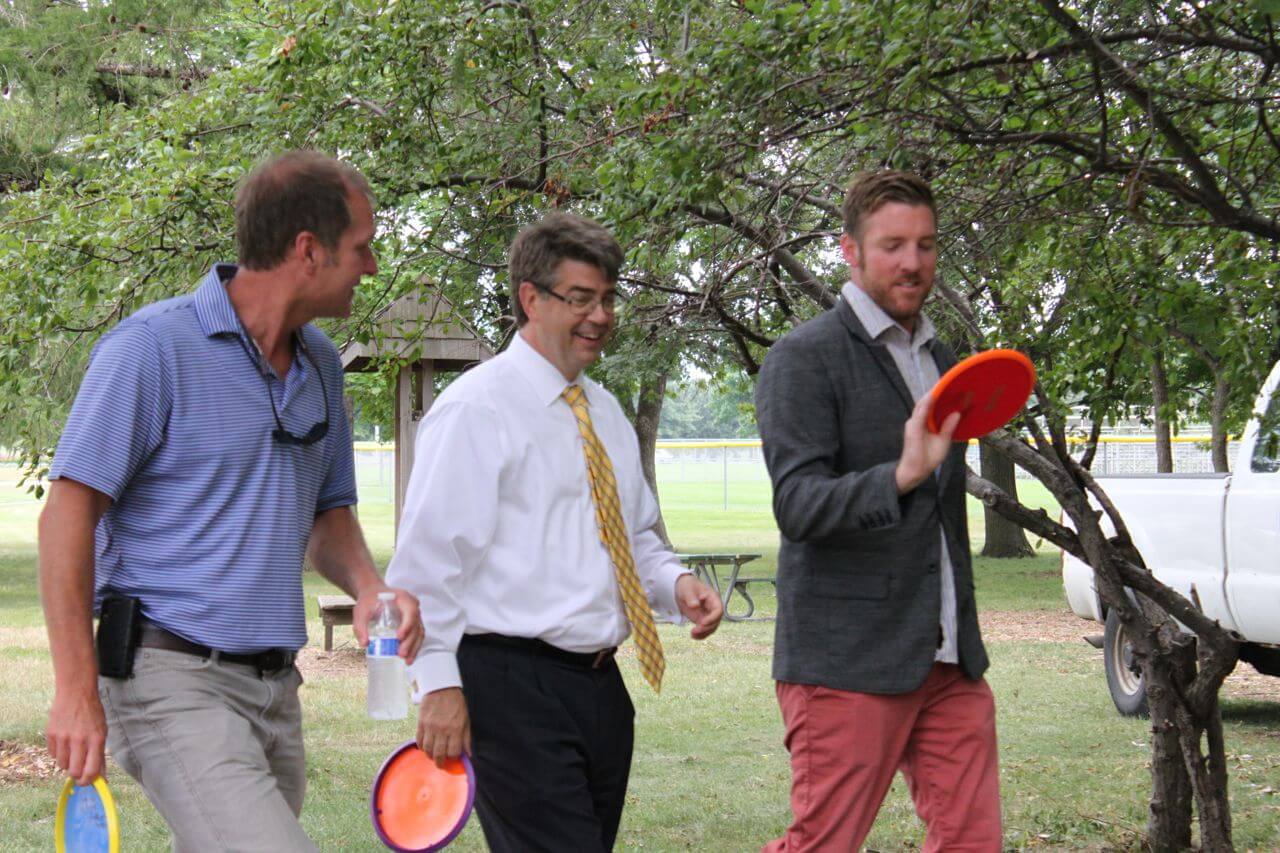 Partners Aaron Martin, founder and Chief Marketing Officer, and Justin Cherry, Chief Strategist, unveiled the second automated disc golf retail center in the country this Friday at Seymour Smith Park, near the parking lot and only a few yards away from the beginning of the park’s disc golf course. Their other partner, based in Minnesota, Ross Brandt, Community and Development Director, could not attend the opening. The innovation, called TeeBoxx, is a fully automated retail center that sells discs to be used in three unique sports––disc golf, free style, and ultimate.

A very new company, TeeBoxx was incorporated in Nebraska in January 2012. The Omaha-based company has already placed one machine in Kendall Indian Hammocks Park in southwest Miami, which has two 18-hole disc golf courses. Identical to the one at Seymour Smith, the Miami machine is stocked with new discs from manufacturers like Innova and Discraft available for purchase by credit or debit card. “Our TeeBoxx helps introduce people to the sport, so the gear in our machines is geared to beginners and intermediate players,” states Martin. The machines provide three types of discs—drivers, mid-range discs, and putters. As in traditional “stick” golf (as disc golfers call it), disc golf utilizes a set of drivers and fairway discs plus a putter for control, distance, and accuracy. A beginner typically plays with three discs, one of each type, whereas intermediate and advanced played may carry a dozen or more discs. Drivers are used from beyond 200 feet of the basket, midrange discs are used between 100 and 200, and putters are used in play within 100 feet of the basket. TeeBoxx consists mostly of drivers “because most players are only concerned with throwing as far as they possibly can,” according to Martin.

TeeBoxx discs are available at prices ranging from $8.95 to $18.95, based on the quality of plastic of which each disc is made. Martin notes the relative economy of disc golf compared to traditional golf, where clubs can cost hundreds of dollars and courses are not free through public parks. Martin, Cherry, and Brandt also have a clear company mission beyond profit—to help support the community and promote disc golf. 7% of gross sales go back to the park: “Every time somebody buys a disc a portion of the revenue goes back to the city and they have it specifically earmarked to go right back to the Frisbee golf course,” explains Cherry. TeeBoxx negotiates contracts to ensure the 7% specifically supports disc golf, providing funds for course improvements like new baskets and chairs. The Omaha Metro Disc Golf Association will also help identify ways to spend the new revenue. “We have a really good relationship with the parks,” says Martin, and Parks Director Brooks Bench agrees, “[Seymour Smith Park] is a very, very popular Frisbee golf range, one of the most popular in Nebraska, and to have [TeeBoxx] here…so people can buy a new disc is a great add to the park.”

Martin explains his passion for disc golf: “I’ve been playing since 2004 and the minute I started playing I got the fever. I was addicted.” The entrepreneur quit his job running a production company and went on tour playing professional disc golf, traveling around the country. “I had to find a way to only think about disc golf,” the enthusiast admits. Martin, who is native to Southern California, moved to Omaha in 2000. He met Cherry, who was born and raised in the La Vista area, in Omaha through disc golfing leagues. “I think everybody’s business model should be about partnering with the community—that was one of the things that made me fall in love with disc golf. It was an opportunity to improve the park, improve the community. Once I started getting real involved in the nonprofit club here (Omaha Metro Disc Golf Association)…I felt more a part of the community. That’s one of the reasons I love disc golf. [TeeBoxx] was just a continuation of the partnership and relationships that I’ve already developed with Omaha,” says Martin.

The box is relatively self-sustaining and low maintenance, fully automated and open 24/7. Martin and Cherry will restock when inventory runs low. The founders of TeeBoxx worked to ensure the durability of their machines: “We went through a year and half of research and development to make this machine weather resistant, vandal resistant, and theft resistant,” states Martin. The boxes feature video surveillance and the laminate covering is spray paint resistant. Engineering Technician Tim Carmicheal ensured the new machine meets Americans with Disabilities Act requirements by raising the land a few inches and pouring new cement so that the machine is accessible from handicap parking. Carmicheal also provided new power for the machine, and handled layout and legal issues.

About twenty supporters, family, and park officials joined Martin and Cherry on Friday at 2 p.m. to officially open the new machine. Representative Lee Terry of Nebraska’s 2nd Congressional District was also on hand to throw his first disc. “I think this is a cool concept, and I love entrepreneurship,” states Terry. “[This idea] happens to merge with what a lot of us are taking about in DC today, which is how do we become a healthier society…It’s one of those things where it’s just all good. Young people, entrepreneurs, and health.”

While enthusiasts might carry bags, refreshments, or stools to wait between holes, only a disc is required to play disc golf. Nevertheless, Martin and Cherry are looking in to selling more than just discs through TeeBoxx, such as towels and birdee bags. The company may expand into general sports equipment, providing solutions for biking, soccer, and other sports played at public parks. Martin, Cherry, and Brandt are also working to build an online store through TeeBoxx.com. Two more machines are expected for Broward Country in South Florida, and Texas has expressed interest. For TeeBoxx machines, “the dream would be to be on the top 160 courses across the county and then move oversees,” says Martin, mentioning Japan, Switzerland, Germany, and Brazil as countries where disc golf has become popular.

Martin and Cherry note the difficulty of finding stores and waiting for online disc orders and hopes providing discs at the point of play through TeeBoxx will draw families and even larger crowds to the already popular disc golf course. “[Disc golf] is a low impact sport,” states Martin; “any age group can play” and “take it to whatever level you want…Anybody can come out here and have fun and stay fit.” As supports began to throw the first official TeeBoxx discs, Terry realized the broad potential for players at any skill level to enjoy the game: “there’s a little bit more to it than I thought.”

Disc sports, particularly disc golf, have been growing in popularity for more than a decade. Today, there are now more than 3000 disc golf courses in the United States and 3000 more in countries around the world. About 300 to 400 plays visit Seymour Smith each day. Local disc golfer, Brad Vannoy, a weekly visitor to the disc golf course at Seymour Smith says, “I’m stoked. Now I can stop by the TeeBoxx and see what’s new anytime I play. Also, if I lose a disc I can replace it without having to leave the park…I don’t want to wait for my discs to come via UPS or the mail. When it’s time to throw, it’s time to go.”

Seymour Smith Park is located at 68th and Harrison Streets and is open from 5 a.m. to 11 p.m. daily. For further information about TeeBoxx, visit www.TeeBoxx.com.