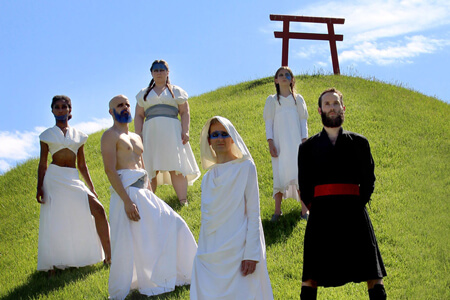 Nebraska Shakespeare offers an earnest, intellectually provocative production of The Tragedy of Macbeth. It rushes to its foretold conclusion full of energy, at the same time often running roughshod over the eloquent and meaningful speeches which underlie this play’s enduring reputation.

Director Vincent Carlson-Brown seems to be attempting to make this a wound-up relentless machine wherein personified Fate is omnipresent, in this case as The Weyward Sisters. As if Macbeth may seek and achieve power but has no choice to be or to do otherwise. Here the language becomes a means to tell a story, but does not sufficiently explore the ramifications of what is happening or why. A lamentable loss.

As for the story and what is usually claimed as the major theme, you may know about the presumed significance but finding it in person does not come easily, here or elsewhere. Posited is that Shakespeare endeavored to show how people seeking political power for its own sake can poison the world and time and themselves. An eternal truth, as relevant this political year as ever. Yet, often cited drawbacks in the text are that so little time is given to character development and that Macbeth too quickly becomes a murderer, with scant space to emerge as tragic. These problems present a major challenge for interpretations by directors and casts.

Your understanding about this version could benefit from reading director Vincent Carlson-Brown’s program notes. He sees Macbeth as about the curse of ambition and the struggle between free will and predetermined fate.

A reminder of the plot. Macbeth, having his future foretold by the Sisters, acts to fulfill the prediction that he will become King. And, urged by his wife, murders King Duncan.  To contravene another prophecy, that his dear friend and warrior companion Banquo will father future kings, has him murdered. Thereafter Macbeth, turning tyrannical, commits more killings. Eventually he dies in a war spearheaded by Duncan’s sons Malcom and Donalbain along with other nobles, including Macduff, while subsequent Sisters’ encouraging visions prove to be ambiguous.

In Carlson-Brown’s view, Fate is always present, hovering over or participating in the action, thus personified by seven Weyward Sisters (one of whom is clearly male) who take over the roles of 19 other characters as well. Their make-up and costumes remain essentially the same throughout, which can be confusing, despite potential intellectual justification, especially when two young women in flimsy attire represent murderers or when similar utilitarian figures represent nobles at the Banquo-haunted banquet, yet look like surrogate-peasants … perhaps another idea to consider. Oddly, that scene is played a second time, but without the visible ghost.

Carlson-Brown and choreographer Wai Yim have come up with fascinating visual effects and compelling movement. They make the phantom Banquo an eerie and disturbing presence. And they’ve found a way to suggest a balletic coven when the Sisters come together, and created a hellish nightmare when Macbeth re-visits them amid fiery lights and smoldering shadows. Plus, Carlson-Brown’s final fierce fight between Macduff and Macbeth has dramatic excitement.

Macbeth as portrayed by Josh Doucette on July 1st came across as a character eternally confused and angry, full of sound and fury, as if his many eloquent reflective moments in the text were but impediments in his rush to power. However, during the second half of the performance, he did seem to give more weight to some of what he said. Meanwhile, other actors often spoke in conversational ways rather than making the best and most of the language. Among the multi-role Sisters especially the lines had little clarity of meaning. This presents a disappointing contrast to the wonderful results from some of the same actors in The Taming of the Shrew, that superb other Shakespeare on the Green offering this summer.

In many interpretations of this play, Macbeth and his Lady are often shown as a sensual loving couple whereby the Lady has power to mold her man to her designs. Not here. Sarah Carlson-Brown seemed more like a gentle sister, someone equally trapped by the rush to doom, rather than a person who forcefully tries to control the direction.

Joe Lullo’s Macduff had sturdy and true strength and gave fine understanding to everything he said. As Malcolm, Daniel Ian Joeck conveyed distinctive personality, the kind of thing that felt missing from many other actors. And Ezra Colón stood out as the comic-relief Porter, here named Seton, in a scene full of dynamic and exceptional clarity.

Friday evening was marred by aural forces under no one present’s control with a plethora of noisy airplanes and helicopters continually on the same route above, due particularly to an aggressive Home Pride Contractors-banner flight.

(Full disclosure: I auditioned for a role)

Carlson-Brown’s notes ask if we have “agency in our lives” citing the possibility of “foregone conclusions.” He says he doesn’t have the answers but enjoys “circling the question.” Thus, you could be better off approaching this production without forgone conclusions about what it should be, to ponder and enjoy his exploration of the tale he tries to tell.