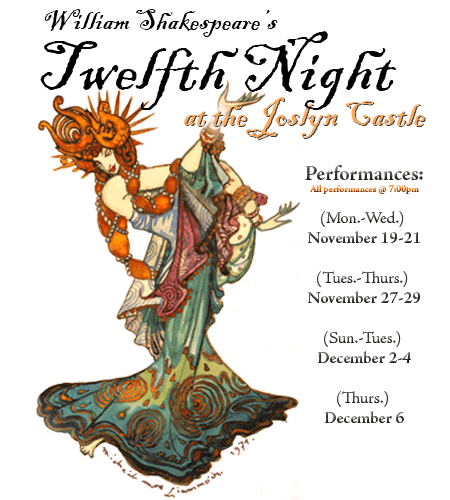 “If music be the food of love, play on. Give me an excess of it.” So begins Twelfth Night at the Joslyn Castle.

But the Brigit St. Brigit company’s only excess comes in sound of laughter bouncing off the handsome satinwood walls of the Castle’s elegant music room. The romantic comedy has been called Will Shakespeare’s most musical play and this cast can claim it as the funniest.

It not only opens with that familiar line about “the food of love” from a lovesick Duke Orsino, but ends with by far the most familiar of the bard’s songs, “With hey ho, the wind and the rain…For the rain it raineth every day.” They even throw in a boisterous 12th-day shout-out of “Five golden rings.”

Arguably, David Ebke as Feste the Fool, accompanied by Scotty Pace, gives the play its perfect musical essence while a marvelous Malvolio by Thomas Becker provides the comedic highlights backed by the trio of a tipsy Sir Toby Belch, a gullible Sir Andrew Aguecheek and their conniving friend Fabian.

Add the delightful Mary Beth Adams as Maria, their partner in crime, and you have more than half the fun, especially when the three men can hardly contain themselves behind the shrubbery as Malvolio falls for their trickery.

It helps when a character completely looks the part and that’s the case with Brent Spencer, the Creighton professor with such impressive theater credits. He sports both the high-waisted rotundity and the rosy nose of a tippler, just the rogue to ask the puritanical Malvolio, “Dost thou think, because thou art virtuous, there shall be no more cakes and ales?”

Jeremy Earl, a Brigit regular, does Sir Andrew proud, especially when he becomes the target of Sir Toby’s tomfoolery.  But nothing tops the scene when Becker as Malvolio finds the fake letter pretending to be from Countess Olivia, the lady he serves as steward.

He’s taken in by her alleged profession of affection accompanied by requests to dress and behave strangely to show that he shares the passion. The somber Malvolio must practice a strained smile that comes off as an alarming grimace. And he becomes almost acrobatic in flaunting the suggested yellow stockings and crossed garters.

The romantic side of the story also fares well in the persons of Ashley Spessard and Katlynn Yost. Ashley plays the near-drowned Viola, washed ashore in the shipwreck she believes claimed her twin brother Sebastian (Brendan J.D. Reilly).

Viola disguises herself as Cesario, a young man who serves the Duke in courting Yost’s Olivia. Of course Olivia falls for her Cesario while Viola pines for the Duke. Both women make their feelings palpable, but it helps the viewer to come to the play fully aware of identities, especially when we’re asked to believe that the other characters confuse Ashley and Brendan as identical twins.

Viola and Olivia bear the romantic burden of the story as successfully as the comic characters carry the fun and Ebke’s Fool the music. And the Brigit’s annual treatment of Shakespeare puts another feather in the directing cap of the theater’s founder, Cathy M.W. Kurz.

In the past, most Brigit drama featured performances by Scott Kurz, Amy Kunz, Laura Leininger or Equity actor John Durbin, all four powerful players. Durbin will return to Brigit next spring in a most promising pairing with Joe Miloni in The Dresser.

But none of those four appeared in this Twelfth Night cast, yet the director worked her magic with as strong a lineup as you could ask, a mix of such veterans as Barratt, Spencer, Adams, Becker, Salonis and Earl with such rising talents as Spessard, Yost, Reilly, Diaz and Ebke.

And she did it with music plus costume design of Charleen JB Willoughby, but without special lighting or scenery. Honors for set design must go to the original creator of that beautiful Joslyn Castle music room, with its striking wood, light fixtures, stairs and balcony.

The fact that you can tour the Castle rooms during intermission and partake of wine and cheese (sponsored by Spirit World) after the actors take their bows—well, that just enhances the whole theater-going experience.

The limited seating promises sold-out performances, and it brings the audience close to performers quite capable of handling their close-ups.