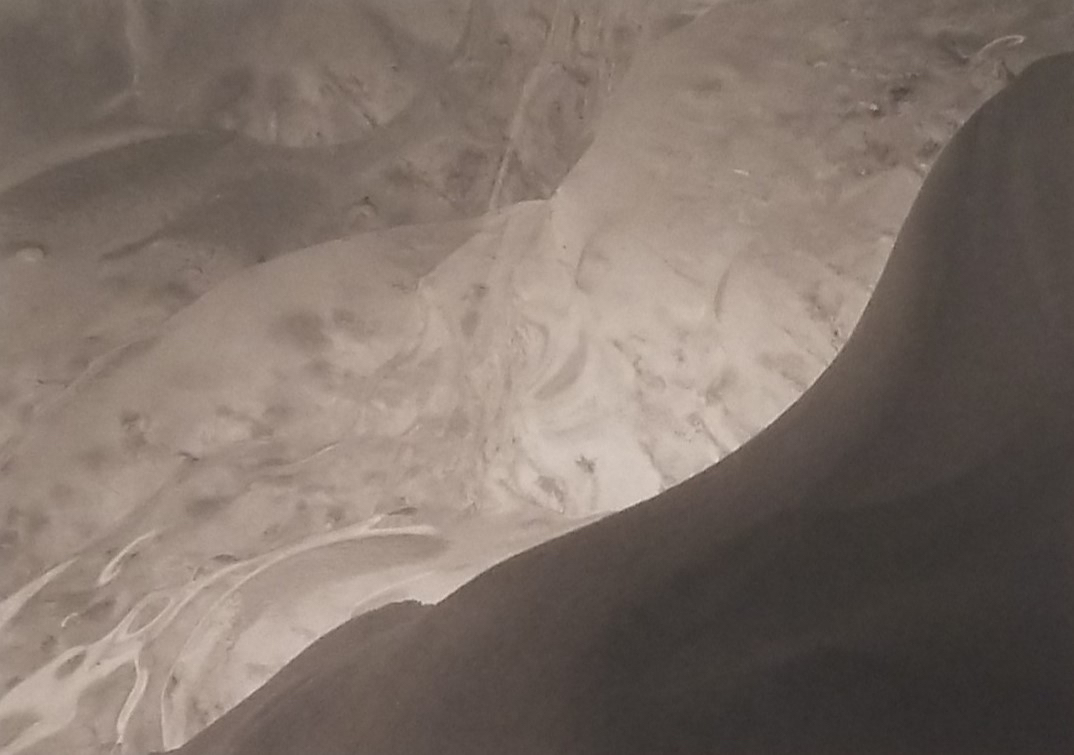 Berlin photographer Jens Knigge recently made a trip to Iceland and Norway and brought back “souvenirs” that are rich, mysterious and serene. Northern Light: Platinum Prints by Jens Knigge, currently on view at Garden of the Zodiac Gallery, documents his journey through the winters of 2013–2016 with images of the aurora borealis and assortive natural features that serve as an eerie and beautiful record of the wonders of the Arctic Circle.

This journey is visualized in a monochromatic palette–soft browns, grays and white created through a process called platinum-palladium printing, an analog technique developed in the 19th century. Photos are printed from film negatives to the exact same size and hand brushed giving the finished image both an artistic touch and a more direct connection with the artist’s often paradoxical vison.

There is a sense of discovery that comes from these prints. Many of them feel like plates out of an explorer’s guide book. Because the printing technique comes from a time when the Arctic was gradually being unveiled to the public through exploration, the sketch-like surface and barren composition in this exhibit feel historically genuine. 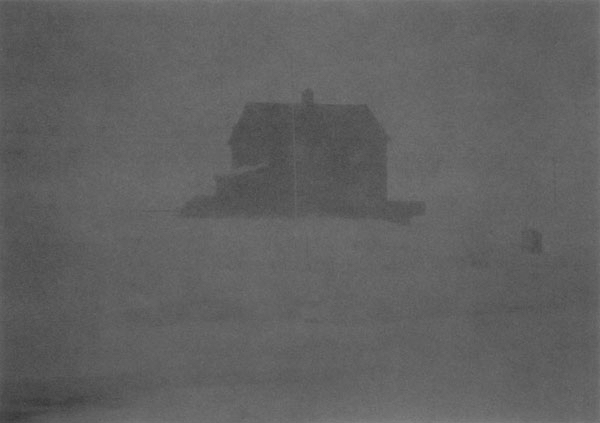 Yet the illusive imagery is but a pure glimmer available only to the photographer. While the prints that contain traces of civilization like “Neighborhood” appear like the documentation of an archaeological goldmine, so too, the scenery seems both desolate and precious. The “white abyss of infinity” almost swallows up whole frames, with only a thin curving line to demarcate a feature in the landscape.

This abstraction of the natural world and the ghostly capturing of it also compels a conversation about its environmental future. These pristine, supernatural and serene, features that live at the top of the world are also extremely vulnerable to climate change those reinforcing one of several paradoxes in his work. 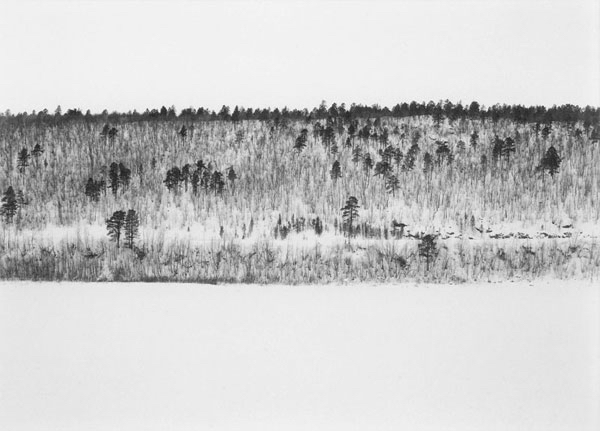 The series suggests the smallness of human beings in the face of the grandeur of nature; but the conflict comes into play where we realize that human beings are the most significant culprits behind nature’s destruction. But it is because of this fact that the fragility of the details of Knigge’s work stands out more. The etched-like trees of “Tonojoki” and the shadowy ripples and cravasses of water glacier in “Vatnajökull No. 1” suggest their time is limited.

In the companion book to the exhibit, Contact: Northern Light, Paul Cezanne is quoted: “Things are going badly. One must hurry, if one wants to see something, everything is disappearing.” We have a desire to see this beauty before it’s gone, but the act of demanding a last look can only contribute to the sense of impending loss. Knigge has a romantic vision of this part of the world, and he truly captures this sense of wonder and defeat. Yet his exhibt reveals even more. 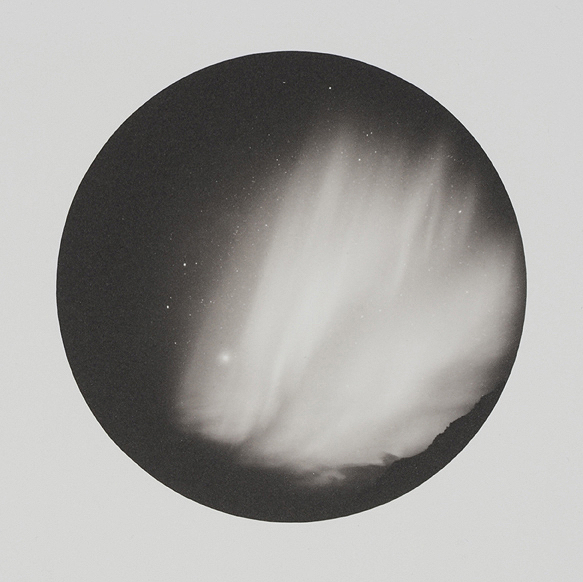 Knigge’s images of the aurora borealis adds another interesting environmental component among the other works. The Auroraseries documents the phenomenon caused by collisions between electrically charged particles released from the sun that enter the earth’s atmosphere and collide with gases such as oxygen and nitrogen.

Though the event is extremely colorful, Knigge chose to use the same process and monochromatic palette. Because of this, the supernatural seems even more prevalent. That the images of the sky seem more hazy and voluminous while those of the land are more detailed and constrained correlates with the idea that the phenomenon of the aurora borealis is beyond our reach on earth and an artifact of something larger than we can know. 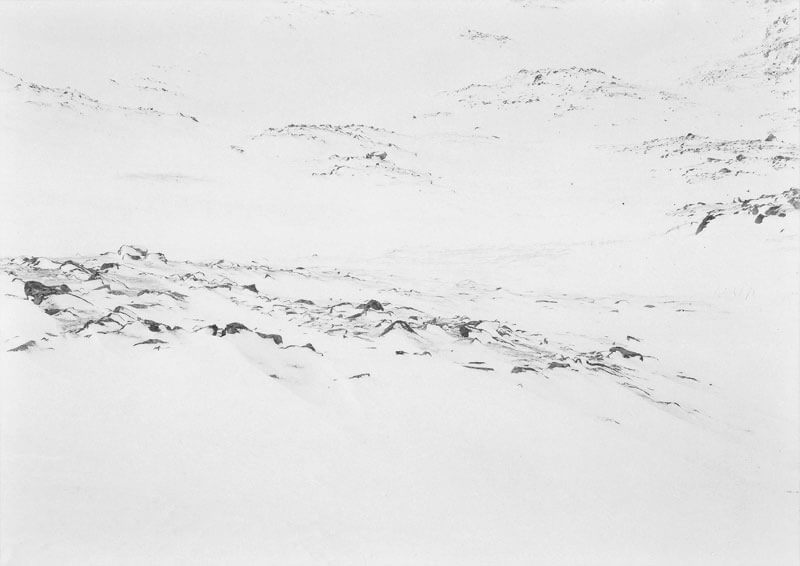 The light that fills the sky during the special occasion of the aurora borealis is something entirely different – and that is the idea. Contact: Northern Light relates that history has described this event as the “onset of transcendence within our trivial world” and, through Knigge’s lens, “becomes futile to try to interpret.”

That he has chosen to regardless may be the biggest paradox of all. Still, his “souvenirs” succeed in marking his journey as something much more than trivial.

Northern Light: Platinum Prints by Jens Kniggeis on view through January 29 at Garden of the Zodiac Gallery, 1042 Howard Street. The book, Contact: Northern Light, is available for purchase at the gallery and includes beautiful reproductions of very piece in the show. For more information, visit jens-knigge.com or contact Garden of the Zodiac Gallery at 402.341.1877 or gardenofthezodiac@gmail.com.