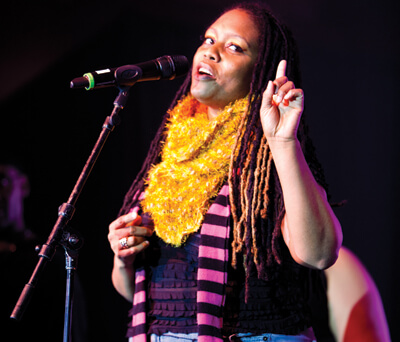 Sprinkle theater folks generously in a common crowd and they might seem exciting. But surround them with rockers or other artists and let the yawning begin. How lively were the theater winners at the Omaha Entertainment and Arts Awards? By far the liveliest was 90-ish Elaine Jabenis, the grande dame of the metro stage, who fired back with class at emcee Tom Becka who mispronounced her long-familiar name. Next liveliest was Kevin Lawler, who hugged Jabenis upon receiving the Best Director of a play award for The Death of a Salesman, one of many top honors taken by the Omaha Community Playhouse. Lawler looked shaggy and rumpled enough to have crawled out of a “La Boheme” attic. The rest of the award recipients who weren’t off rehearsing or performing somewhere belied the dazzling talent that earned their honors. Exclude the beaming Amy Lane, bare-shouldered in bright red, as the only one who picked up prizes for two theaters: Best Actress in a play for her lead role in the Blue Barn’s Rabbit Hole and Best Comedy for Almost, Maine, which she directed for the Playhouse. She could have completed a hat trick if a third theater where she works, the University of Nebraska-Lincoln, hadn’t been shut out despite a number of nominees, especially the Miracle Worker. Anyway, while emcee Becka complained about musicians who looked like accountants, the theater winners specialized in looking good and saying little. Most weren’t invited to the podium for acceptance speeches. Especially striking was a young nominee, Ashton Taylor, who didn’t win in her category but performed her big number from Annie, and shined vocally and personally while promising that “The sun will come out tomorrow.” It was also notable as the only theatrical performance amidst musicians and slam poet Felicia Webster. If we can claim her for theater after her performance in For Colored Girls at the John Beasley Theater, then her rap about reciprocity and “let go,” backed by D. Kevin Williams among others, negates most of the above by bringing a lot of life to the stage. And then there’s Katie F-S, named the Best Local Slam Poet. She posed, hanging a studded tongue, as she accepted her award. Maybe actors should adopt catchy names such as All Young Girls Are Machine Guns, which won two music awards. Closest to the 10 honors awarded the Playhouse (most were accepted by Susie Baer Collins who won as director of Fiddler on the Roof which also won best musical) were five for the Barn, including three for Rabbit Hole, adding Jordan Rundingen’s Young Actor award and Mary Beth Adams for Supporting Actress to Lane’s acting award. The Blue Barn’s Dr. Jekyll and Mr. Hyde won in sound design for Martin Magnuson and lighting for Carol Wisner, often-honored for her craft. When she accepted she added thanks for her husband, Bill Van Deest, who won the scenic design trophy for his work on Creighton University’s Les Liaisons Dangereuses. That was another challenge for the emcee who pronounced Les as if it was short for Lester. You know, like that famous Frenchman, Lester Miserables. When Mark Thornburg was honored for playing Tevye in Fiddler, he completed a sweep of such awards, having been recognized by the Playhouse with a Fonda-McGuire award and by the Theatre Arts Guild. Best actor went to the great John Beasley for his theater’s Jitney. That appeared in the Monday morning World-Herald as “Jitney John,” a play we suspect is known for its freaky-fast delivery. That’s the reason, by the way, that Becka claimed he was chosen to emcee: his freaky-fast delivery. (It wouldn’t do to tease the daily without noting that this weekly ran the previous year’s nominations in an “official program” published last week. Still, the Reader got the right list ready in time to appear at place settings the night of the show.) Everything didn’t fall to the Playhouse, Blue Barn or Creighton. This writer’s favorite musical of the awards season, Rent by SNAP! Productions, brought a Best Actress Musical award for Audrey Fisher and a supporting honor for Angie Heim. Its director, Todd Brooks, picked up Audrey’s hardware, noting that she was off dancing somewhere. Angie’s honored performance was one of many nominated from Rent, which had Wayne Moore and Sean Buster nominated in a supporting category won by Tim Abou-Nasr, who was busy rehearsing at the Playhouse. Andrew McGreevy got a shot at the spotlight when he won for Best Premiere of New, Original or Local Script. He explained that his writing of Brick: An a Capella Musical, contrary to the common claim that the script is the thing, wasn’t more important than the entire team that put that show together for SkullDuggery Theatre. The fullest podium comments came from Robin Welch on receiving Best Local Dance Production for Rainforest by the Omaha Theater Ballet. She was proud that her company’s final production was recognized as one of its best.