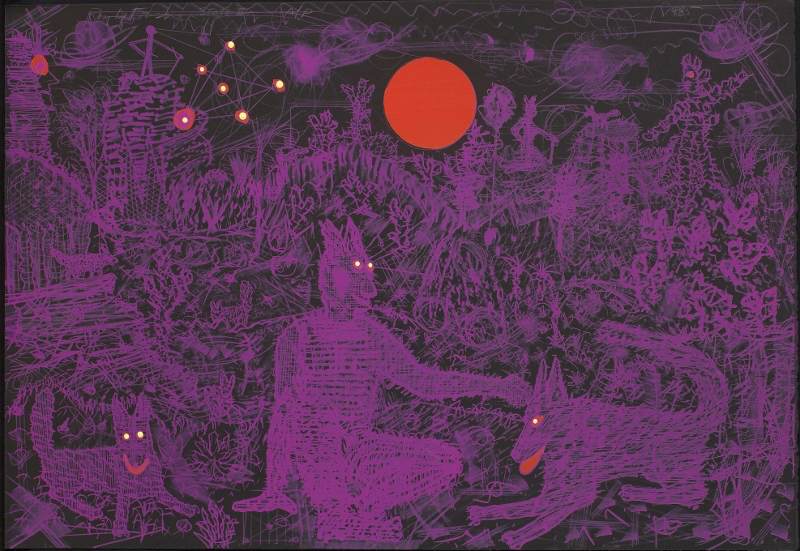 The late artist Roy De Forest clearly loved his dogs. He considered them “interchangeable with people,” even metaphors for our inner selves. This North Platte native whose family migrated west to Washington to survive the Great Depression when he was just four years old, has left a legacy of surreal worlds, populated by stylized characters and “nutty” canines that amuse, confuse and delight.

Of Dogs and Men at Gallery 72, a solo exhibition that runs through January 13, presents 31 prints of Roy De Forest’s phantasmagoric journeys that span his artistic career. Mostly lithographs, including several artist’s proofs, these works of fantasized settings, crazy quilt patterns, psychedelic colors, barnyard animals, plus a fair number of dogs, draw us into the circles of his imagination.

Endorphins pop at a first glimpse of the intense purples, riveting reds, oranges, magentas, lime greens and brilliant blues of these works. In fact, the color schemes are as unlikely as they are stimulating. Lime green and flame red on a turquoise matrix in “The History of Flight” provides an airy backdrop for cartoonish characters, animal and human, some akin to Zap underground comix of the 1960’s.

Rather, De Forest was on a mission, a fly-in-the-face challenge to minimalism. He sought to come at a canvas from many sides, to fill it full of experience, narrative and symbolism, to maximize its potential.

De Forest’s art has been associated with the early 60’s Funk art movement in the San Francisco Bay area. A regional movement, Funk art was a reaction to the dominant abstract expressionism of east coast artists and to “the holy hush-hush of high art” as critic John Russell called it.

However, in 1969, De Forest and his revolutionary colleagues at University of California, Davis, did not see themselves as Funk artists. Instead they coined “Nut Artists” as their artistic identity. The point was that everyone kept their own unique style; they were “eccentric, peculiar, individual.”

De Forest penned the “manifesto” for the group’s first exhibition stating that the goal of the group was to create a “miniature world into which the nut could retire, with all his friends, his animals, and paraphernalia.” How apt a description for the works in this show.

One of the standouts in the show is a midnight scene. Much like wearing infrared glasses, viewers see three figures, as well as the surrounding environment, in a startling infrared purple. The dark sky sports a red moon, and constellations twinkle in yellow. What could be a frightening scene of howling wolves, upon closer examination, one finds a wolf-man reaching out to pet a docile wolf with a smiling dingo by his side. 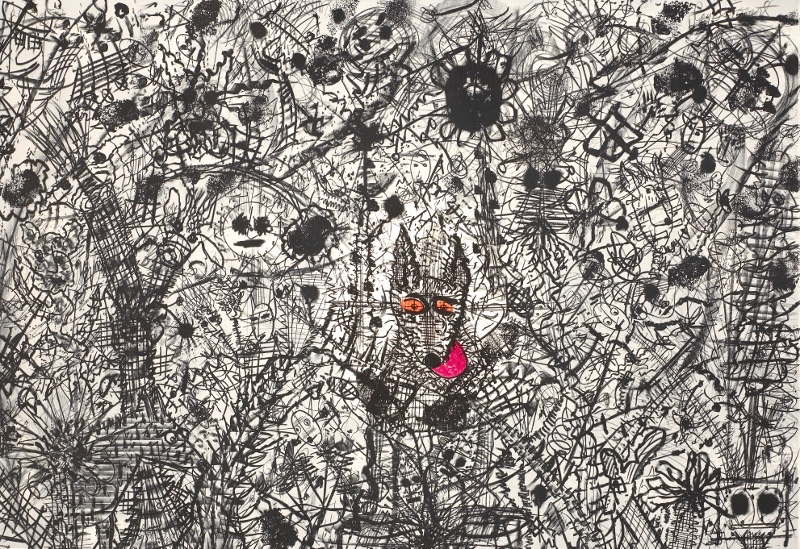 “Beware of the Night Dog (State 1)” testifies to the idea of maximization of surface. The depth of field seems infinite as layers of flowers, fauna, facial eggs, spirits in the distance, crosshatching and swirling lines, nearly obscure the print’s focal point, the “night dog.” Yet his orange eyes and magenta tongue break through the surface of this drawing, his eyes acutely trained on you. 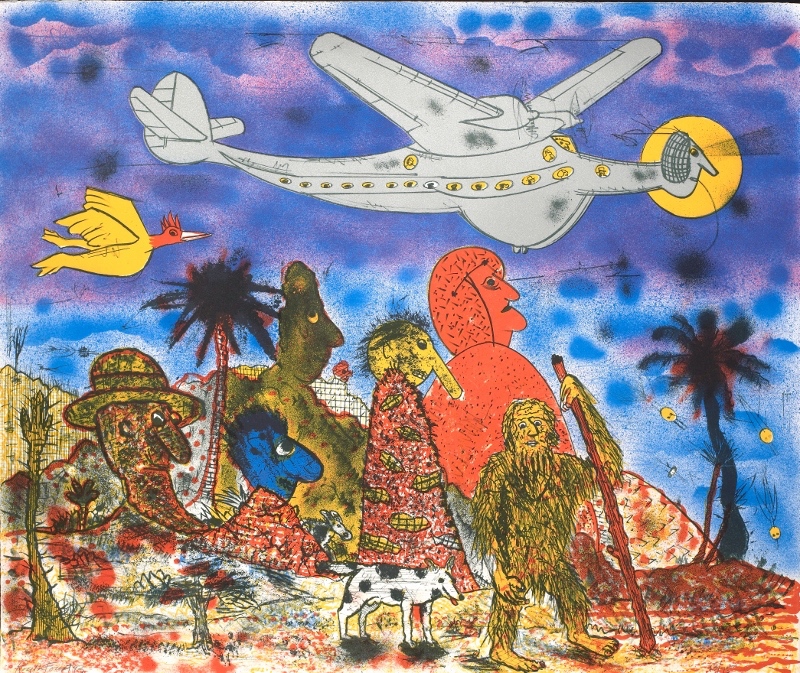 “Untitled/Primeval Times” exemplifies De Forest’s archetypal journey theme. As in “The History of Flight” and other works, all characters seemed to be travelling together in a direction, often aided by ships, airplanes, horses, or an occasional kangaroo. In this case, time passes, as historical figures sprout from mountains in the landscape, a primitive bird flies behind a female-headed airplane and Caveman with his sidekick, Dog, lead the pack. 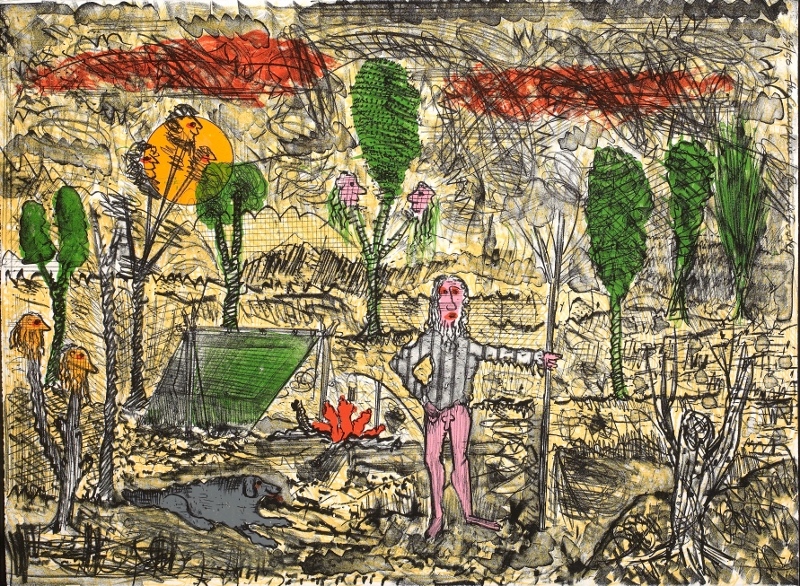 Four other prints, “The Campfire,” “Untitled/Humane Society” and two additional prints depict scenes that will resonate with campers drawn to primitive sites. As a group, the works suggest a lone man’s journey at rest, as night demons emerge and threaten. Armed with his steadfast hound and a glowing fire, there’s reassurance he will survive. 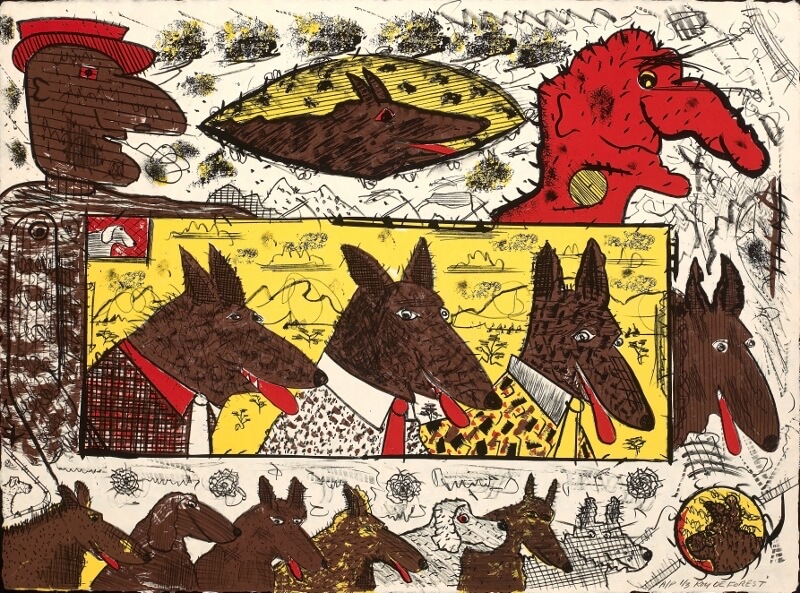 On a lighter note, “Shepard Brothers,” a family portrait of German Shepards in their Sunday best shirt and ties, conjures up the chummiest of folk art. On its lower border, a mixed breed line-up of dog cousins pose, happily panting as they frame one side of the brothers, while the top and sides are likewise framed by big-snouted men and dogs. Circular and oval windows capture “photos” of past dog ancestors and help add to the dimensional effect of the interior frame.

Frames, kitschy and hand-built and often with added sculptural elements, are a De Forest signature. As a life-long tinkerer and near hoarder, this creator of fantasies, extended his themes into the frames with pantry hooks, plastic “gems,” pine wood assemblages, animals sculpted from wood and other playful elements. Three of the works in the show are framed, Dogman and Indian, a mixed-media painting and a lithograph.

In conjunction with the exhibit, Of Dogs and Other People: The Art of Roy De Forest, Apr-Aug, 2017, the Oakland Museum of California, published a book of the same name, written by Susan Landauer. An excellent biography of De Forest, it provides numerous insights into his influences, stylistic devices and the historical context of his life and work. Books are available for sale at Gallery 72.

Roy De Forest’s widow was happy to have such a welcome venue to bring Roy’s work home to Nebraska. As Nebraskans we’re lucky, too, for the chance to experience his exuberance and experimentation within the boundaries of printmaking and aesthetic style, even if it is a little nutty.