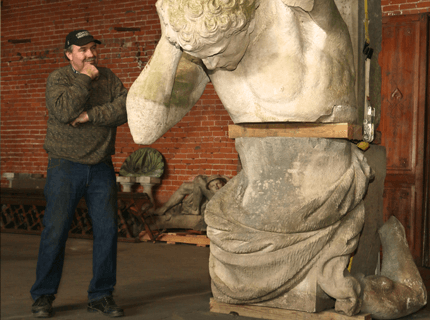 Just don’t call him late to a salvage site.

He sometimes reclaims entire facades. He saved the upper two stories of glazed terra cotta on the 14-story Medical Arts Building before it was imploded. A crew working 100-plus feet off the pavement dismantled the facing piece by piece. Some was reassembled inside the atrium of the First National Bank tower that rose in the razed building’s place. Parts of the facade adorn a Lauritzen Gardens’ Victorian floral display.

“You have to have some sort of appreciation for art, history, plus you’ve got to be pretty strong and willing to take risks, too,” Horejsi says of his work.

What Horejsi doesn’t sell or donate goes into his private collection, It’s housed in a 14th and Marcy warehouse he envisions as an Omaha history museum. The by-appointment facility, whose open-span layout and truss ceiling resemble the Kaneko, is adjoined by a four-story brick building he owns. It all sits directly east of the factory-studio of designer Cedric Hartman, an Old Market pioneer who champions Horesji’s single-minded focus on saving history before it’s lost.

What Horejsi describes as “a hobby” is clearly a passion,

“This is Omaha history. You can’t replace this. The stuff I’ve got is very high-end and historical,” he says while giving two guests a tour of his 10,000-foot space, Its contents are like pieces to a giant jigsaw puzzle of Omaha landmarks. Item by item, he describes the objects, the buildings they came from and any anecdotes about their salvage. Each has a story. The Medical Arts project stands out for sheer audacity.

“That was a very challenging job. Cold, hard, tedious. Risky. It took two months to do it. We had to label each piece, photograph it, crate it up – so it could be reassembled. There was close to 500 pieces, some weighing 500 pounds.”

The direct, personal provenance he has with most pieces separates what he does from many other salvagers.

“I document mine. Taking pictures to me is important to tell where the piece was. I like people to see a picture of the building we worked on and to know I was there to salvage it before its demolition.”

He traces his appreciation for holding onto history to his father, who junked-out old buildings. A young Frank assisted him. Downtown’s historic buildings captured Frank’s fancy as a kid.

Then, as a young man working for Anderson Excavating, which won most bids razing Omaha’s old buildings in the 1970s and ’80s before historic preservation took hold, Horejsi found his calling to save history.

“It was just a matter that something should be done. In some cases I went in and fought to save the stuff. It wasn’t going to be saved. I did whatever I had to do to get it. I was on my own.”

When fire gutted an old streetcar barn in North Omaha except for an ornately inscribed facade he took it upon himself to rescue the front.

“That was the first time I pursued something hard. To get that was just a miracle. We had only a little area to work on top. Back then all I had was a pickup, pulleys and rope. We lowered pieces down. I didn’t even know what I was doing back then,” he says.

He’s since graduated to cranes.

He has remnants from iconic Omaha structures, including Jobbers Canyon warehouses, the Fontenelle Hotel and the Brandeis Theater, and from vanished landmarks outside Omaha, too.

Retrieving items can be hazardous. He nearly lot his life on a job he prefers not to specify except to say, “I fell 25 feet, hit the cement on my side and broke my hip.”

Not everything he owns is something he’s taken off a building himself. An 8,000-pound sandstone sculpture of Atlas from the old downtown YMCA building razed in 1968 was saved by someone else. He says, “It got moved around here and there and it ended up in Mount Pleasant, Iowa on a farm in the weeds. I was aware of its travels and so I convinced the guy who owned it it needs to come back to Omaha. So then I had this problem of how am I going to get it to Omaha.”

Enter Frank’s 15-minutes of fame on the A&E Network reality series Shipping Wars that has haulers bid on oddball jobs. The trucker who won Frank’s gig, Jenn Brennan, enjoys a following for her model good-looks. Last year a crew captured her and fellow trucker Jess strutting and preening as they transported Atlas to its new home.

Horejsi welcomes any attention to his hoped-for museum. Citing City Museum in St. Louis as an attraction with a similar concept, he says, “This would be a neat thing for our community.”

There’s much work to be done though.

“It’s not at the level I want it to be. Things aren’t displayed on the walls as they should be. There’s no heat or running water in here.”

Despite its rough shape, he says “this building’s got a really good feel to it,” adding, “‘I’ve hosted parties for Restore Omaha and the Ak-Sar-Ben Foundation and people are curious, they ask questions, they want to see these things. It’s really satisfying to see people happy and that’s what this stuff does – it makes people happy.” Everyone from elected officials to celebrities – “Alexander Payne loves this place” – to students and historians are fans of what he’s assembled.

“Telling people where all this stuff came from is part of the fun for me.”

Omaha interior designer and preservationist Jill Benz admires Horejsi’s “heart and will from a very young age to save Omaha’s treasures,” adding, “We wouldn’t have these incredible fragments and facades from our past if it wasn’t for his hard work and determination.”

She first met him in the late ’70s, when the ruins of early Omaha were being auctioned off.

“Everyone was saying someone should be saving these. Frank came through and pursued saving our heritage.”

Horejsi says, “This is all about preserving the stuff for future generations. It needs to be kept intact.” He suggests he’s taken it as far as his resources can. “I’ve invested a lot of time, money and sweat in this building just to get it to this point. I’m not saying I’m burned out or anything but I’ve put in a lot of effort and sometimes you wonder, Is it worth it?. I’m 60 years old, I’ve done this for a number of years, I ain’t got much time left.”

He hopes a benefactor or investor shares his vision for making his warehouse into an educational center. He has plans for a sculpture garden out front and a condo in back.

He just wants to know his history crusade’s not been in vain and to prove the skeptics wrong.

“I’ve heard over and over, ‘What’s up with Frank?’ When I bought this building it was, ‘Why and the hell do you want to go down there? That’s a blighted area, it’s dangerous,’ blah, blah, blah.”

He’s been stubborn enough to stick it out.

“Nobody’s going to change my mind – I’m a stupid Bohunk. Once I get onto something, I keep pushing forward.”

Besides, he likes that his 1880s building was home to Chicago Lumber when the transcontinental railroad ran through.

“They’d offload lumber, stone, whatever. All these materials went to different building sites to build early downtown Omaha, so it’s ironic it came out of here and now I’ve brought it back.”

Horejsi wants to ensure this history is secure once he’s gone. With no wife or kids, his legacy is his collection. With a sweeping gesture at his bounty, he says, “I’m married to this building. I’m married to all this.”