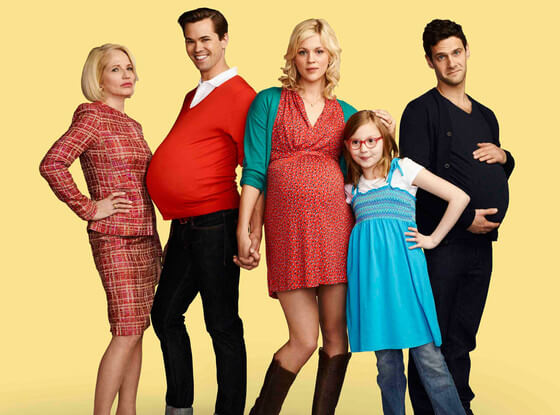 Now that we’re seeing Andy Rannells daily in promos for The New Normal, don’t be a johnny-come-lately and say, “Yeah, he’s the Creighton Prep grad who starred in that big Broadway hit, Book of Mormon.”

Maybe you saw him first during the London Olympics as NBC began pushing the new television sitcom. A clip showed Andy as Bryan Buckley with his male partner as both volunteered when asked, “Who is going to be the biological father?”

Even before he became Elder Price, the Mormon missionary in the short-sleeved white shirt,  some Omahans enjoyed his early days in children’s plays at the Emmy Gifford or in Doug and Laura Marr’s Brady Bunch plays. A few might wonder, “Wasn’t Andy the one playing Greg Brady while Conor Oberst played Bobby?” (Oberst who became famous first would show up with his guitar and play his latest song.)

Now 34 and tall, Rannells “was so little” when actor Rob Baker remembers him as an Oompa-Loompa with Kevin Barratt as Willie Wonka in that chocolate factory classic. “He already had that great smile,” Baker says, “but he was so new and quiet.”

This writer first saw him as the young kid in the Dundee Dinner Theatre’s 110 in the Shade, the musical about the charismatic rainmaker. I didn’t react as quickly to his blossoming talent as to his beaming persona—the bright-eyed and bushy-tailed kid with the arched eyebrows and gleaming smile.

So how did he get from here to there, to becoming the iconic image of the biggest Broadway hit of the past two seasons and then earning a role on a tv show already plugged as among the best of the new season?

Maybe it started when Andrew Scott Rannels danced along with the Golden Dancers on tv. Or when Charlotte, his mom, enrolled him at age 8 in classes at the Emmy Gifford, just a few blocks from their home in the Hanscom Park neighborhood.

There, teachers such as the late Tracy Iwersen and Jim Hoggatt took him under their wings. The late Pam Carter came to be his theater mom and elsewhere he was befriended by Norm and Louise Filbert, the actors who founded Chanticleer in Council Bluffs.

“I honestly don’t think I would be doing what I am doing,” Andy told me, “if I hadn’t had the support of Norm and Louise, Earl Bates and Pam Carter, and Tracy and Jim at the Emmy Gifford. I realize now as an adult, that the greatest gift they gave me was their respect and encouragement.

“But they always remembered that I was a kid. They looked out for me in the way adults should look out for children. I felt very taken care of by them and I am so grateful for that. And they were also incredible teachers. I learned most of what I know about acting from those early experiences with them.”

Those experiences led to interning in the Marr’s youth program at what started as the Diner and became the Circle Theatre. Laura Marr later played Andy’s step-mom with Keith Allerton as her husband and the Filberts as the Thayers in On Golden Pond at the Firehouse Dinner Theatre.

Rannells was also blessed with another strong support group: his family.

When he opened in the Mormon musical, mom and sister Natalie Whitney were present. And they were back on Broadway when he closed. At other times, “All of us saw the show,” notes brother Dan, who manages Sokol Hall. All includes two more sisters, Rebecca and Julie. Much earlier, though, Charlotte Rannells backed her son’s every undertaking.

“My family, all living in Omaha, has been supporting me no matter what I was doing. No matter how big or small the project.”

When his voice teacher, Becky Noble of Cabaret Theatre fame, pushed his involvement in a young artists’ competition in Florida, his supporters saw that he made it south, where he received an honorable mention.

Even the edgiest shows that could have caused parents to draw the line weren’t denied Andy. Rob Baker recalls the Diner play, Doing Chickens, with some nasty situations, prompted him to check with the family to see if they were okay with Andy’s participation. Charlotte looked at the script and didn’t flinch.

That doesn’t mean she was thrilled when her son graduated from Prep and headed to New York City. “He left at 19,” she recalled. “It’s hard to deal with when your kids move away, but the others are here, and for me it’s all right. You’re never ready for a child to leave home, but I knew that’s where he had to go.”

The current “all right” includes baby-sitting 21-month-old grandson Gavin, who was gurgling on her lap as we talked.

Mom didn’t have email 15 years ago, but she talked to Andy on the phone “all the time. He’s very good about keeping in touch.”

Andy attended Manhattan Marymount College for a time, but a New York Daily News headline would label him a dropout. In an interview that took place while he was fitted for the Armani tux he would wear as a nominee at the Tony awards ceremony, he apparently tossed out a quip claiming, “I was drunk for the first seven years.”

He’d done cartoon voice work in Omaha on Street Sharks, so it wasn’t surprising that he was hired to voice Archie in the Archie Andrews cartoon. The big transition to his later stardom came when he joined the Jersey Boys cast as Bob Gaudio and appeared in Hairspray as Link Larkin. (Here’s a future Omaha dream cast: bring the original Frankie Valli, former Playhouse performer John Lloyd Young, back in that role with Andy as Gaudio.)

He was the last talent cast in Book of Mormon. Its creators, Trey Parker and Matt Stone of South Park cartoon fame, saw “an underlying Midwestern quality.” Andy told the Sioux City Journal, “They thought it was similar to the Mormon aesthetic. There was a cheesiness about me that fit the role.”

The script was kept hidden from early auditioners, but when Andy got a look at it he was sure “it was in my bag of tricks.”

Not only did mom and sister Natalie attend his opening, they were escorted to the party by movie star Paul Rudd and SNL’s Bill Hader, and saw Ron Howard there. Andy admits to some star-struck moments—nerves when Jim Carrey was in the audience and sneaking a glance at James Franco.

He told the Iowa newspaper that “Growing up in Nebraska, the only exposure I had to Broadway was the Tony awards.” He said he had seen one of his fellow Tony nominees, Norbert Leo Butz in the Playhouse’s Nebraska Theatre Caravan. (You might have seen Butz in Smash, the television musical about making a Marilyn Monroe musical.)

Now that Andy is in LA—well, actually he was back in New York City last weekend helping publicize The New Normal—he says he’s “having a blast” working 14 hour days, “absolutely loving the scripts” and finding it “so exciting to see where these characters are going.”

The show debuted Monday evening, but has been online for some time. His best-known co-star, Ellen Barkin with major movie credits, is featured in one of the online clips giving “the gays” credit for keeping her hair looking good.

But, while saying nice things about fellow cast members and the slower pace of LA—“of course the weather is incredible and I like having to drive again, dusting off my driver’s license” unused since high school—“I am not going to lie…I miss New York.”

After 15 years there, “I am completely in love with it and will always consider it my home—after Omaha, of course!”

He’s diplomatic enough to insist, “I am so grateful to Lena Dunham and Ryan Murphy (New Normal creators) for giving me these experiences, but theater was always what I dreamt of doing. And I hope to return to theater.”

Maybe after the show has run its course. And after the Mormon movie. Then he can reflect on his role as the kid in Dundee’s 110 in the Shade.

That’s when he first said to his teen-age self, “I think I am actually sort of good at this.”