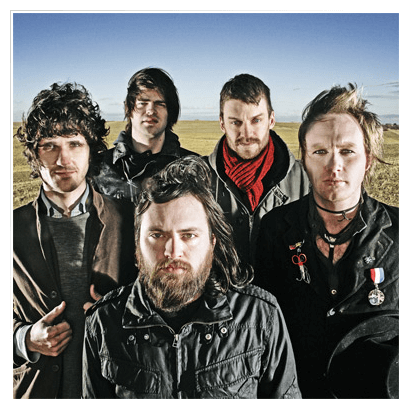 “We wanted to be open and inclusive about it,” said Rachel Jacobson of Film Streams’ decision to select particular artists to curate the 2012 Local Filmmakers’ Showcase at the theatre

In the first two years, Film Streams had a jury that curated the series. Jacobson said the jury was a diverse group comprised of local artists, academics and film lovers. Because of that mixture, it was difficult for the jury to come to a consensus on which were the best films to include and so the showcase never really had one unifying voice behind it.

The Faint, a local rock band, is curating the showcase this year. The group is both nationally and internationally-acclaimed. Jacobson said she knows many people will wonder why Film Streams chose The Faint and question the group’s connection to filmmaking, but she has an answer ready.

“They are some of the most important artists in the community. Their live show includes a really innovative video component so they are huge film fans, all of them. Everyone knows what their sound is, what their aesthetic is and what it means to have them choose the films in the show,” Jacobson said.

Artist Tim Guthrie’s has a short film in the showcase. He said he is excited to see what other films The Faint has picked.

Guthrie had a film in the first showcase in 2010 and is honored to be returning to the showcase with his film, Blaze. Because Guthrie’s work is more experimental in nature, he said he is more likely to show his work in an art venue than a traditional movie theatre.

“I am a visual artist and experimental filmmaker as well so a lot of films I do are a little more unusual and kind of art installation projects than traditional films,” said Guthrie.

The film is a minute long and is one piece in a larger series that will ultimately be exhibited in more of an art space than a movie theatre.

Guthrie said his film has to do with environmental issues and though it works on its own, is meant to work in a larger context with the other films.

“This one is so short and so experimental that I am not sure what the reaction is going to be but I like it,” he said.

Recently, Guthrie was in New Zealand for a six-week artist’s residency. He did a time lapse of a mountain while he was there. When Guthrie returned to the United States he said he started to imagine the rest of the piece. Creating the film did not take a long period of time but did occur in two parts and has a focus on environmental issues.

Despite being selected for the Local Filmmakers’ Showcase, Guthrie said he’s an artist and filmmaking is just one of the many things he does.

“I don’t think of myself as a filmmaker. That is just one medium I work in. I work in a wide range of media and styles depending on whatever the concept is I’m tackling at the time. I feel honored to be included with what I consider to be real filmmakers,” said Guthrie.

Jesse McLean said she has been studying filmmaking for the last decade, but feels most proud and comfortable showing her work from the past 5-7 years.

McLean’s film Magic for Beginners was selected for the 2012 Local Filmmakers’ Showcase. She said the film is experimental in nature but still has a narrative flow.

“Fandom is so interesting to me. You’re always a fan of something. So most people can relate to being a fan and having that kind of devotion. And people can also relate to being disappointed by media and that’s in there too,” said McLean

She said she has always been interested in how people relate to pop culture and constantly revisits that source. McLean loves being able to broach a broad range of topics. That’s what drew her to cinema in particular.

McLean’s film includes imagery taken from You Tube, specifically videos of a mob of people chasing after Robert Pattinson, star of the Twilight series. She said there is also footage of two actors that bring themselves to tears on camera. Other imagery includes appropriated materials from a television production of Heidi. McLean said there’s really a variety of methods used in the film, including still images and visual effects.

Though both Guthrie and McLean have experimental films in the showcase, Jacobson said The Faint has chosen a wide variety of films from comedy and rock videos to documentaries and experimental movies.

The showcase is diverse and Jacobson attributes this to the types of films that were submitted.

“Just because The Faint are a rock band doesn’t mean they are going to choose all rock videos. The selection of films is partly about the diversity of the entries and partly about what The Faint felt was the strongest work,” she said.

Going forward, Film Streams will choose different arts leaders to select the films for the showcase. Jacobson believes this will make for a really strong show with a big impact on the community.

She said the showcase represents a wide range of films being made in Nebraska, Iowa and South Dakota.

McLean is excited to share her film with Omaha audiences.

“I never create work that has an obvious thesis or conclusion. You know? Where you watch it and say, ‘Oh, I get it,’ that is never my goal,” she said.

Since McLean came to film from a background in art she said she is more interested in viewers bringing their own interests to the work. She said there’s room for that especially since she uses a lot of appropriated materials.

“This film is more about asking questions and then some of it is just experiential, more about relating to your own experience. I would be happy if people found something to relate to in the end,” said McLean.

For Guthrie’s part, he is hoping people get what he is trying to point to but likes for the viewer to have an unexpected experience. He said he wants the audience to really question what they just saw and what it means.

Film Streams is having a premiere and post party with the filmmakers on Friday, October 19th at 7:30 p.m. Jacobson said there are a limited number of tickets that are still for sale.

The 10 films in the 2012 Local Filmmakers’ Series screen daily for October 20th through the 25th. Check out filmstreams.org for filmmaker bios and a complete schedule of showings.