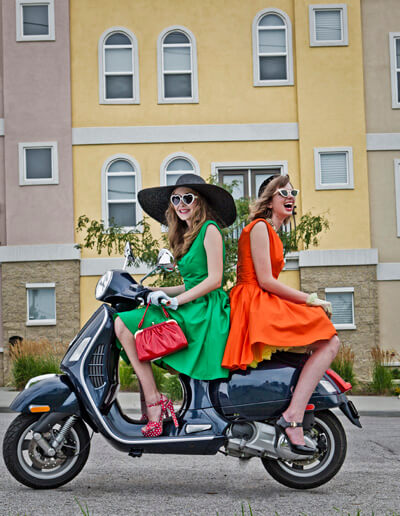 Reported in cooperation with Jessica Stensrud

Nick and Brook Hudson, the husband-and-wife team behind what has grown into one of the Midwest’s biggest fashion events, say although this is their third OFW event, they’re just getting started. “We plan to go from a show to an industry,” Brook Hudson said. “We want to turn our market into a place where designers don’t have to move to make a living.”

This year, the Hudsons are well on their way to reaching that goal by inviting special guests to the show. Those guests, including Carmela Spinelli, chair of fashion and accessory design at the Savannah College of Art and Design, will be providing feedback to the Omaha designers, as well as to OFW organizers.

Other major changes include an e-ticketing system (attendees should bring their printed ticket), the chance to select and reserve seats and special events for participating salon professionals. With so much talent involved, Brook Hudson sums up the OFW experience with one word — “humbling.”

That in mind, The Reader takes a glimpse a few of the designer that will most likely make this year’s OFW unforgettable.

Created for Omaha Fashion Week last year, Fernald’s line “d0ll clothes” has since been featured in various fashion shows around Omaha such as the annual Goth Ball and Toyland fashion shows. While the name of Fernald’s line speaks to the obvious inspiration for her designs, she says that she also draws influence from “Japanese street styles, such as Lolita, Rococo, Victorian and Edwardian fashions.”

Fernald says her 11-piece, fall 2011 collection is called “d0ll h0spital.” “As the name suggests, the collection is inspired by all things medical, in addition to my basic doll style.” Falling in line with the whiteout trend seen on the runways of designers like Alexander Wang this year, her color palette is “Mainly white with touches of mint and pink.”

Showing a glimpse of wise-beyond-her-years influence from the well-known designers who inspire her, Fernald says spectators can anticipate cohesiveness between her collections. “I tend to pick a different theme or concept for each collection, though each line acts more like a chapter in a book — separate but part of the same whole.”

As a young, up-and-coming designer, Emma Erickson already has accumulated a resume any fashion-holic would envy. She earned her degree in fashion design at the Academy of Art University, and promptly received an internship with Hervé Léger by Max Azaria (BCBG) design team.

“I applied for an internship my senior semester, 2010. Recruiters from BCBG came to our school, so I interviewed with them. I was really excited about the brand. It’s a higher end, and my favorite of BCBG. I got to do a lot of pattern graphs that they send to vendors overseas,” she explains. “It was really cool to be behind the scenes to see the process.”

While in school, she was chosen to show her work at Mercedes-Benz Fashion Week Spring 2011 in New York City. If that’s not enough, Erickson currently designs and assists at Princess Lasertron with fellow OFW designer, Megan Hunt.

“She is so inspirational—and not in a cheesy way. I’ve learned so much about how to run a business. There’s a lot you don’t learn in school. I learned about design, but not real world things like businesses and how to protect yourself.”

And now, along with her colleague, Erickson will be showcasing her work, which she says is inspired mostly from textures and shapes.

“I’m doing a lot of casual looks right now. It’s a lot different from the corsets, gowns and cocktail dresses. There are more washable materials, the textures are easier. With casual dresses, there aren’t as many hours sewing, so I can focus more on silhouettes, pleating, trims, and different techniques for texture,” she says.

As mentioned, her name is Megan Hunt. To Omaha fashion insiders, she’s known as “Princess Lasertron.” Her unique name suggests an abundance of creativity and being unafraid to have fun with fashion — and her new collection makes good on that promise.

Hunt began Princess Lasertron in 2005. She started off creating floral bridal bouquets made out of felt and vintage buttons. She now has a three-person company, and they design for 250 brides a year.

For this collection, she is staying true to her favorite silhouettes and patterns, but making the pieces more versatile for daily wear. Good news for fashionistas on a budget — the pieces also will be available at a more accessible price.

Hunt was inspired by how young girls see the world and who they aspire to be. “It’s the thought of seeing the world the way we did when we were little girls — imaginative people who have never been told what isn’t possible — and rejecting the disappointment of mundane adult life,” Hunt says.

Along with a new collection, Hunt has several surprises in store for OFW-goers. “Londoner Kat Williams of Rock’n’Roll Bride (Europe’s highest-trafficked wedding blog), is coming to model a special limited-edition design that I created inspired by her. She will also be here throughout the week doing some press stuff. On the finale night, I am also hosting a VIP runway finale party with Project Runway’s Mondo Guerra. Plus a few more tricks up my sleeve.”

Backstage at OFW every year, there is a much-deserved buzz surrounding Dan Richters’ line. Known for his ethereal creations and use of unorthodox materials such as silicone, lights and English netting in his designs, Richters is putting the finishing touches on a collection inspired by the deep sea for fall 2011.

“This collection dovetails off last year, which was inspired by naiads from ponds and rivers,” the designer said. “Life is abundant in the deep sea and most creatures are white with translucent bodies, emitting bioluminescence.” Richters strategically placed lights in many of his pieces this year, adding, “If my models are walking in a line, they’re lighting each other. It’s possible that I could do a show entirely in the dark”.

Along with mythological creatures, Richters draw his inspiration from other high-concept designers such as Thierry Mugler, Gareth Pugh and Rick Owens. “I like fashion, but I’m approaching it more like making sculptures.” And while Richters said he’s putting his focus on the present rather than the future, his reason for designing is clear. “Right now, the only purpose of designing is to do runway shows. The platform that motivates me to design is Omaha Fashion Week”.

Omaha Fashion Week takes place Aug. 22-27 in  Omaha’s Old Market district at Nomad Lounge, located at 1013 Jones St. For a complete list of events or to by tickets, go to omahafashionweek.com.