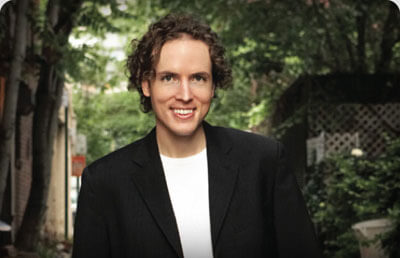 On April 21, KANEKO previews Portals , a multimedia event examining different modalities of creative expression. When the finished production premiers in the fall, it means to seamlessly join live performers on stage with remote artists via video and the web to extend the limits of performance and the dynamics of human connection in the digital age. The work of several national artists is featured, including a partita by acclaimed composer Philip Glass, verse by iconoclastic poet-songwriter Leonard Cohen, music by composers Aaron Jay Kernis (a Pulitzer Prize winner and Grammy nominated artist) and Nico Muhly ( The Reader ) and choreography by Benjamin Millepied ( Black Swan ). Then there’s the virtuoso violin playing of Tim Fain and the video stylings of filmmaker Kate Hackett. Fain conceived Portals on tour with Book of Longing , a Glass song-cycle adapted from Cohen’s same-titled book, but says its themes long brewed in him. For Portals , Fain performs Glass’ new seven-movement partita for solo violin inspired by Cohen’s work. Conceptually, Portals blends private moments with public gestures, improvisation with formality, virtual with reality. At various points Fain plays live on stage and in video vignettes recorded in New York City. Music by Glass accompanies dances choreographed and filmed by Millepied. Glass and other artists are seen in interactive, cinema verite profiles shot by Hackett, who’s also shooting concert-style footage. Fain and Hackett are filming at KANEKO and other Omaha locations. New York City shoots are set for May. Portals’ creators want audiences to have an intimate glimpse of the creative-collaborative process and to experience communication-performance through these various channels in what Hackett calls some “dreamy metaphorical space.” Ethereal mood pieces by Glass and Cohen articulate the longing at the heart of Portals . Fain calls the artists “kindred spirits,” adding, “There’s a real intensity and searching quality I’ve always felt in Cohen’s poetry and music and in Philip’s music.” About Glass, he says, “Even in his calmest textures it seems there’s almost always a real undercurrent of reaching or longing or wanting something more.” In the work of both men, he says, “that desire can become even ferocious at times.” Fain feels a kinship with their work. “When I perform I’m always looking for something new-different to say, to really explore emotionally what’s going on in a piece from the ground up. This searching quality, this desire to find meaning, to find beauty and power and conflict is something we share very much,” he says. “My performing has often been described as incredibly communicative and perhaps a little bit dangerous — living on the edge and reaching for what are the boundaries and then pushing beyond that if possible, which is what I’m trying to do with this project. The overall idea behind Portals is to explore beyond the traditional confines of what a performance can be.” Hackett, a veteran of multimedia works Ask Your Mama and 110 Project , says this co-mingling of forms “opens the audience up to experiencing live performance in a new way. I think that’s what’s really exciting about it.” “There’s a very hopeful perspective in Portals, which is to connect all of the new forms of connection — the portals of today, with traditional art forms” says KANEKO executive director Hal France. France says KANEKO’s “open space for your mind” makes a perfect marriage with the genre-bending Portals. “It is cross disciplinary, which is where we think the really revealing things about creativity happen, not that individual creativity isn’t incredible, but if it’s all self contained in one unit the opportunity for it to get out into the air so that others can understand it better is less. The more people there are, the greater the synergy possibilities.” The project is presented as part of KANEKO’s experimental studio program, which France says supports “accomplished creative people who have an out-of-the-box idea or want to extend themselves into some new territory.” Portals , he says, fits KANEKO’s mission to “explore and illuminate creativity,” adding, “Our goal is to have people experience creativity but also see it in a different way that may be less mystical or at least more familiar, which hopefully makes it a richer experience.” For the preview, Fain and Hackett will provide a sampling of Portals and engage the audience about its evolution. “It’s a very important process,” Fain says. “I hope to come away having really learned something, possibly even something that will affect the course of the project.” KANEKO, 1111 Jones St., welcomes dialogue. “The mere fact you can come to a place and be part of an exchange of ideas is a good starting point,” says France. “It is the common thread we see with people coming here, and we see that growing.” The Portals preview is Thursday, April 21, at 7 p.m. KANEKO, 1111 Jones St. Tickets are $10 in advance and $15 at the door. Call 402.341.3800 or visit thekaneko.org for more information.