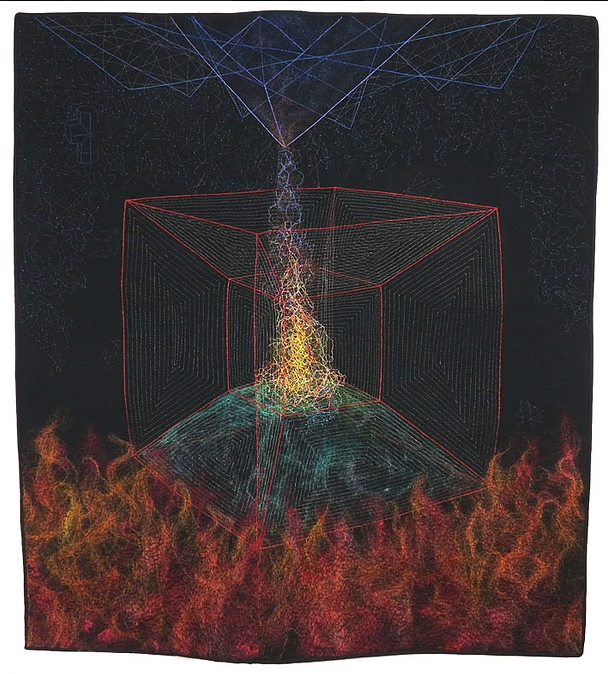 In her latest solo exhibition, Shea Wilkinson: Parallel Worlds, on view until October 6 at Gallery 72,Wilkinson brings her deft talent of free motion quilting and hand-embroidery into a more spiritual territory. The art quilts of her previous series have related to imagery from science, natural and extraterrestrial worlds and mythology, but her perspective in this newest series focuses on multi-dimensional connections.

While images in her work can feel representative of a primitive or futuristic perspective, the point that comes through is that humanity and the human desire for a sense of place and purpose connects both. The medium through which we all tell our stories-whether we lived in the Iron Age or are yet to be born-will change but the underlying premise will always be the same.

A common motif in Wilkinson’s series is the tesseract. The four-dimensional version of a cube represents unperceived spaces that serves as underlying structures of everything that exists: a connection of geometry and spiritual thinking that facilitates an exchange of energy that flows between dimensions. 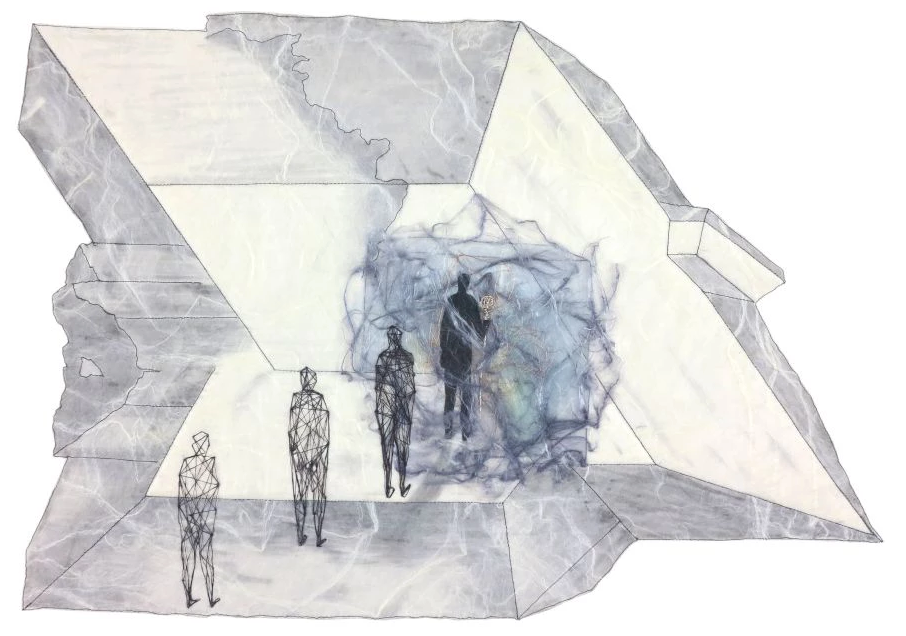 In her piece “Condensing”, there is a contrast between the meshed, transparent cloud where the figures approach while the figures themselves are tightly wound like scaffolding. The figure in the cloud is silhouetted but filled in an blank. With the outer edge of the piece appearing as if it has burnt ends, it feels like our intention of tight control becomes frayed unless we let ourselves try another option.

These tight little figures continue in several of the works including “Passing Through”. Parading over and through the dominate silhouetted figures, the hollowed-out bodies get smaller and smaller as they approach the edge. Though a fondness of miniature things helps, with the larger figures, there was a sense of sacrifice and giving of yourself to others and to giving up ideas that hold you back. The geometric patterns from the stitching help illustrate an idea of circuitry, a system that keeps churning energy and how that propels us forward.

“Cycled” combines several masterful techniques. The winding stitching in the fabric, familiar in Wilkinson’s work and almost feeling like ‘paper grain’ here, sets the base for a chaotic and breathtaking sky. In the piece are raised piles of fibers, little flecks of color woven in an out of both tight and loose stitches, all coming together in a hand-and-machine stitched piece. 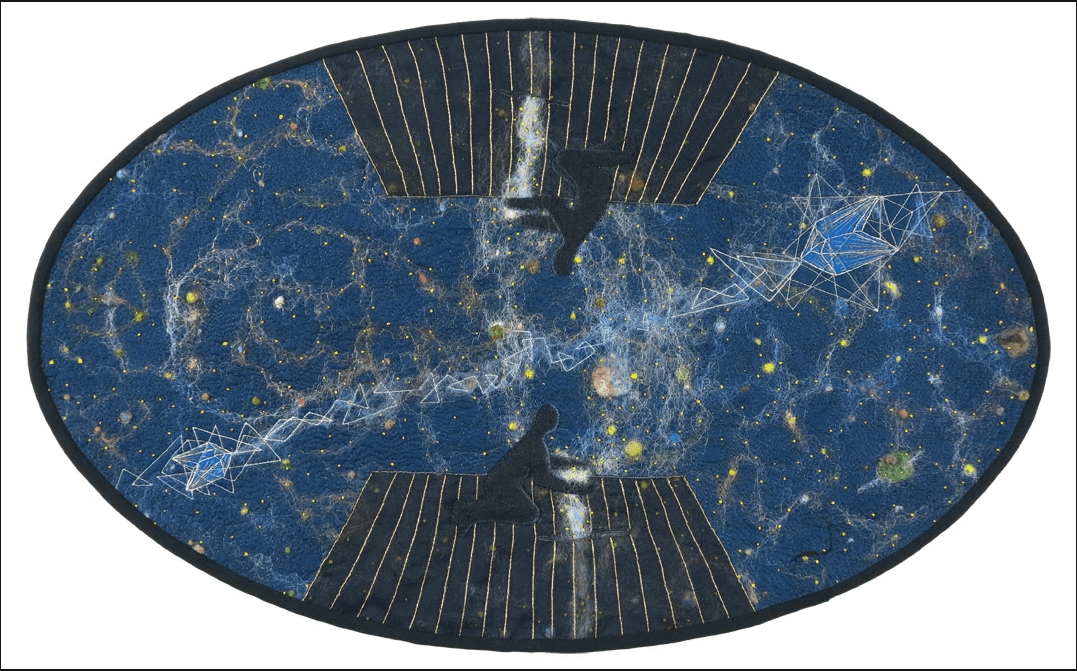 Two figures sit opposite constructing something, a current of solid and transparent lines pulsing between them. This feels like everyone has their place in the world and the barriers (both real and intangible) don’t change that.

This piling of fibers is a technique that intrigues throughout this series. “Into Matter” uses this to create an impressionistic piece with texture, movement and almost a sense of temperature. Wilkinson’s treatment of the fire combines fibers in such a way that the mottled, layered color results in a rich wispiness and an effect that feels so effortless.

The contrasts in Shea Wilkinson: Parallel Worldsare what define its connectivity: a fitting allegory for the human experience. Wilkinson illustrates how using an unusual perspective can illicit supernatural phenomena, and the response from viewers indicate that her work evokes memories, dreams and visions that had previously been stored in their subconscious. This journey between dimensions builds even larger connections.

There is something comforting about being able to encounter one of these pieces without context and know it’s “one of Shea’s,” but with each series she offers something new and surprising. Shea Wilkinson: Parallel Worldstakes us further into her world by connecting it with ours.