Home » Art » Past is Prologue 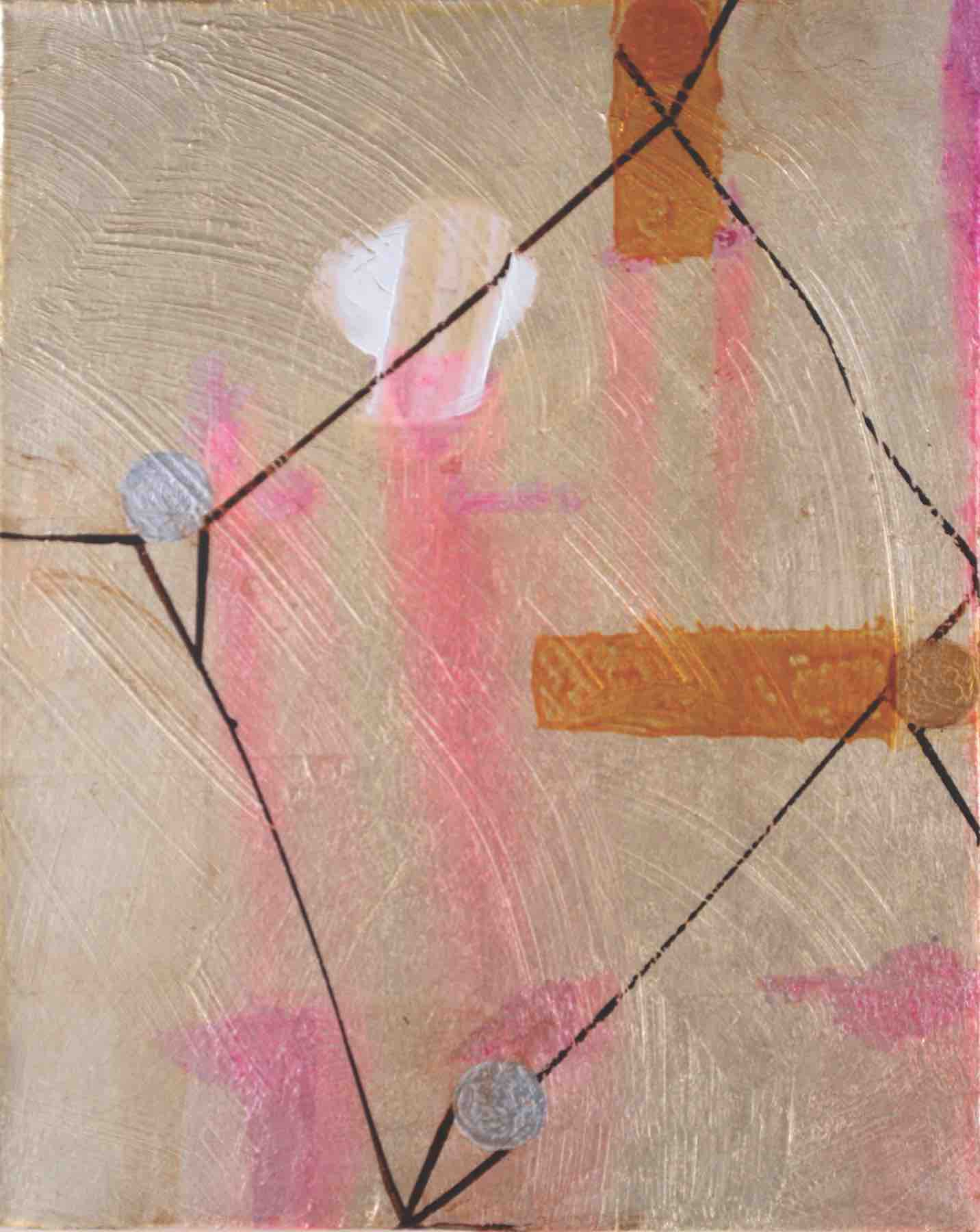 Patrons of Steve Joy’s abstract art who may have missed his recent exhibit, Forgotten Corner, at Gallery 72, have another opportunity to enjoy his work in his current show, Icons, Elizabethans, and Elegies to a Mad King, which continues through May 6 at the Sioux City Art Center.

Both exhibits resulted from Joy’s return to his heritage and birthplace in Cornwall, England. But while the Gallery 72 exhibit resulted in work inspired by Tudor portraits, “those first sparks of civilization: science, mathematics, philosophy and more,” his SCAC show takes a different tack.

The artwork in Icons, Elizabethans, and Elegies to a Mad King, is the stuff of Medieval and Renaissance Europe, but there is no need for you to brush up on your Tudor monarchs or Orthodox dogma. Artist Steve Joy welcomes the mystery and query that comes with abstraction. For him, these paintings are meant for contemplation and discovery, a source of both the imagination and the spirit.

Much has already been written about Joy’s life, education, world travels, and life’s influence on his art. In addition to his art degrees, he is a student of history and religion, and believes deeply that abstraction in art can have an equally valuable spiritual influence on our lives.

The Icons in the exhibit’s title may be the works that most people associate with this artist, as he has been producing these contemplative studies for several years. These paintings are inspired by the religious Icons associated with the early Eastern European Orthodox Churches.

The small, religious narrative artworks were painted on wood, with a somewhat a reserved color palette, but enhanced through the application of gold and silver leaf. They were then usually varnished for protection, over time giving them a warm glow. These Icons were thought to provide illustration and explanation to Biblical stories and teachings of the Church; a conduit to enlightenment.

Joy’s modern Icons borrow heavily from the colors and textures found in the archaic versions. These strongly geometric grids are dimensional but free from disturbances caused by diagonals or curves. The darker rectangles and squares, contrasted with lighter areas and areas of line and slight brush texture, invite the viewer to enter the work.

The modern choices of pigments may be bolder than those of old, but the contrasting areas provide a sense of warmth, and security, many of them serenely glowing due to his adept skills with gold leaf, translucent glazes, varnishes and wax.

“Icon Constantinople” (2008) is a vibrant example of the depth that Joy achieves with the layering of gold leaf, translucent varnishes. The spacious depth of the Icons is very apparent in the piece.

There is no abstract art. You must always start with something. Afterword, you can remove all traces of reality. – Pablo Picasso 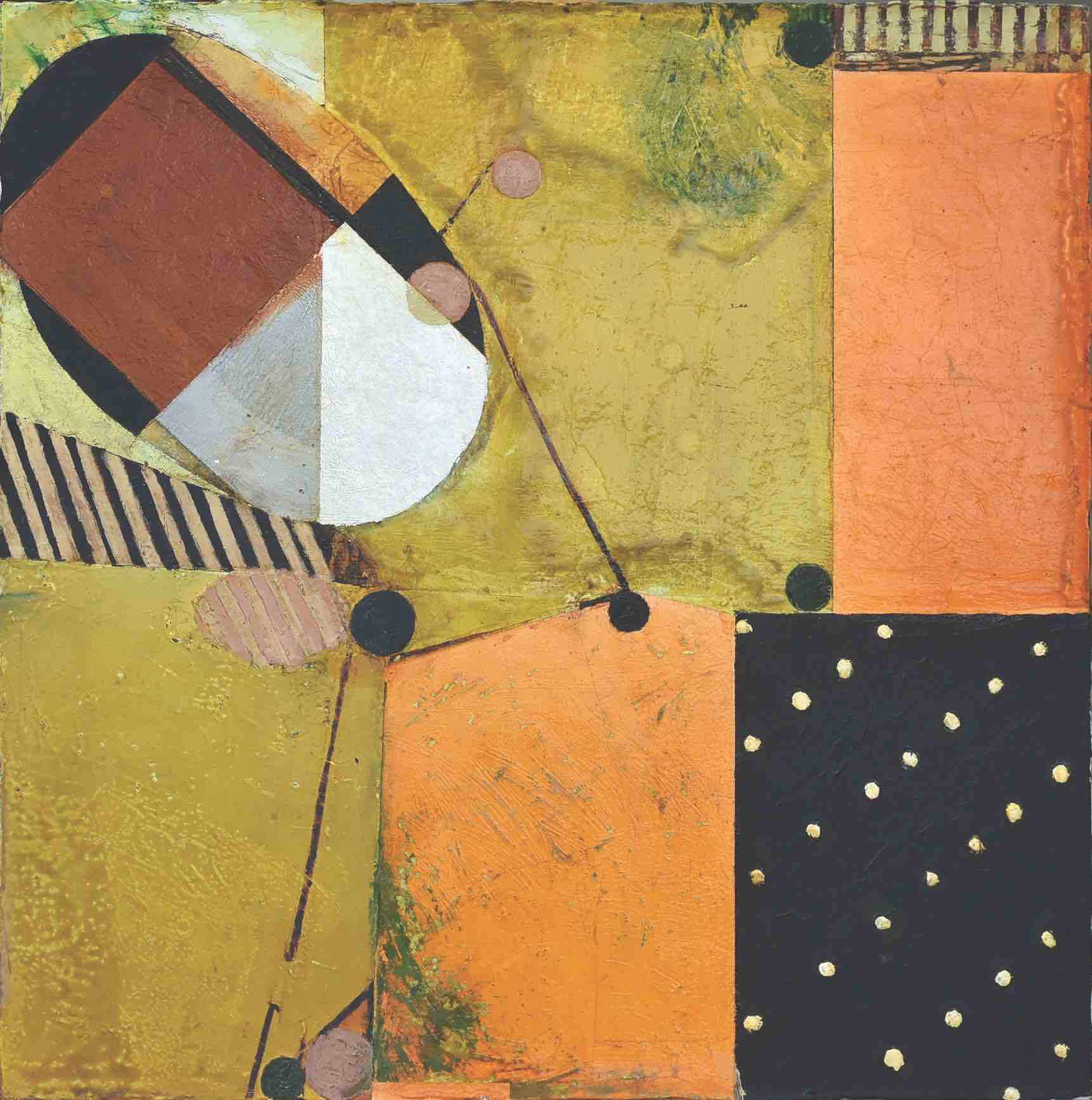 The title’s Elizabethans are Joy’s response to the Tudor portraits of the mid- to late 16th century. Originally, these flat portraits of (mostly) nobility depicted their subjects as wooden and pretentious, with oddly small hands, pasty skin, and thin, pursed lips. All detail was reserved for the uncomfortable dress and trappings fit for a king, or queen.

In these works, Joy steps away from the quiet contemplation and staid geometry of the Icons, expanding his color palette and using animated, expressive shapes with bolder brushstrokes and looser compositions. In “Netherlandish Portrait (unknown)” (2017) he layers tenuous line work on to distorted shapes, adds peculiar patterns, thickness and texture to the paint, and areas of raised dots; an allusion to the fabrics and accouterments of the time.

Although not specifically figurative, they are representational of figure, metaphors and allegory to the personalities of both the portraits and people.

Even an abstract form has to have a likeness – Willem DeKooning

King George III, the source of the third and last series of Joy’s paintings, Elegies for a Mad King, came to power around 1760. He would reign for 60 years. He was both respected and hated, sometimes by the same people, and had the added responsibility of dealing with the new colonists in America. His reign was eventful and complex, and, to add to it, he suffered from a progressive form of mental illness. 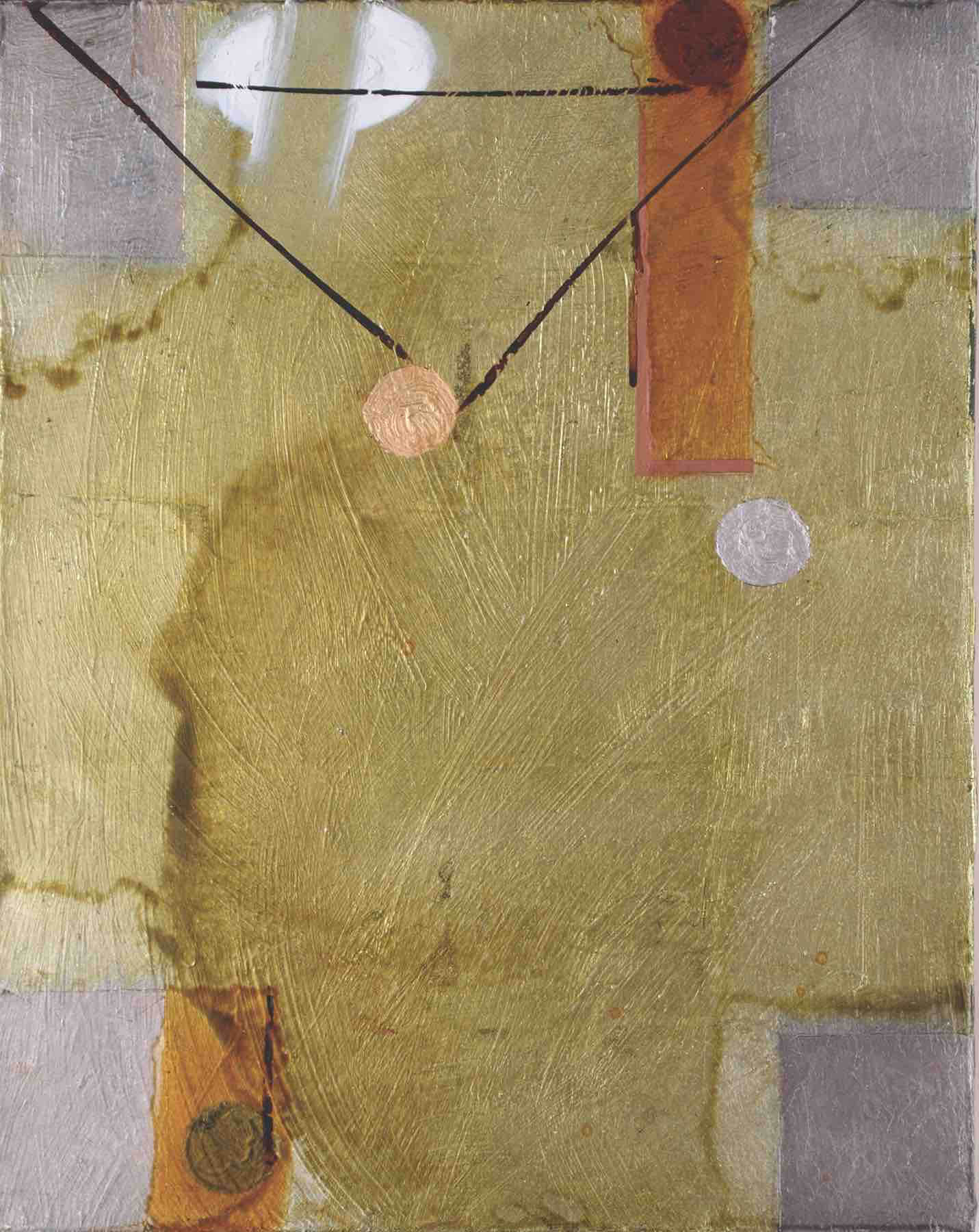 In this group Joy references “Eight Songs for a Mad King,” a 30-minute opera, by Peter Maxwell Davies and Randolph Stow. These three, slightly smaller paintings, simply titled “Elegy to a Mad King 1, 2, and 3” (2017), are the artist’s response to the operatic play, a disturbingly exuberant portrayal of his mental illness.

The three images are the most unstructured and off-kilter of the show, a reverse Rorschach test. With a slight ligature of line and solid shape holding the piece together, these three pieces are suggestive of a loosening grip, and staccato presence of thought.

A thread of lament runs through all of Steve Joy’s work. Not the hand-wrung regret or the howl of grief, but a quieter recognition and praise of things that maybe should not have passed, or at least not without some recognition.

The work is not meant as a history lesson, however; his life and interests are simply inspirations to his further exploration; he welcomes reinterpretation of his art.

The Sioux City Art Center is showing Steve Joy’s Icons, Elizabethans, and Elegies for a Mad King through May 6th. It’s located at 225 Nebraska St. in downtown Sioux City. It is free and open to the public. If you would like any more information, please visit: siouxcityartcenter.org.