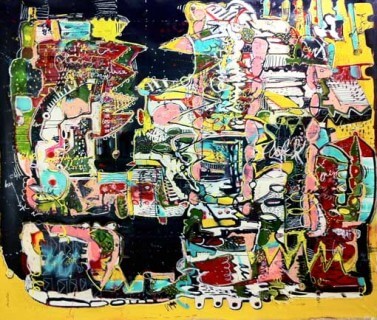 Josh Powell and Kim Reid Kuhn aim to locate the beauty in grit via Golden Guts by challenging viewers’ imaginations to dig into the guts of what is real or unreal, chaos or un-logic. Powell’s current body of large-scale mixed media work injects foreign elements into natural icons, granting dark consciousness to its animal inhabitants. Kuhn’s brightly-hued multi-media abstract works present an information-pregnant, non-stop visual cacophony. Mashing humanity and nature together, her work is simultaneously reckless and calculated. Be prepared for your golden guts to be punched.