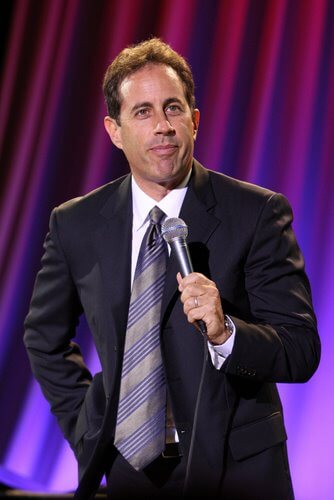 The last time Jerry Seinfeld appeared at the Orpheum Theatre was on September 18, 2008. Seinfeld hasn’t been super busy since then but he has done some things to keep him in the public eye. In 2009, he reunited with former Seinfeld co-creator Larry David on the show Curb Your Enthusiasm as a part of a fictional Seinfeld reunion. In 2010, Seinfeld began occasionally appearing as a panelist on The Marriage Ref. More recently, in 2011, he appared in the HBO special Talking Funny with fellow comedians Chris Rock, Louis C.K., and Ricky Gervais to discuss being funny.  2012, however, is the year that Seinfeld stops talking about being funny and starts being funny again. He’s on the road again with his first love – stand-up comedy. If you can’t wait until Friday to get your Seinfeld fix, check out JerrySeinfeld.com, where he has been choosing bits from throughout his career and posting three of them every day. I’ve seen bits dating as far back as 1989, but he also includes stuff he is doing now and adds new stuff as he goes. On the website Seinfeld writes, “Somewhere out there are ten years olds like I was just waiting to get hooked on this strange pursuit. This is for them. I’m just somehow hoping it will keep this silliness going.” If you’re a fan, you owe it to yourself to watch Jerry keep the silliness going live at the Orpheum.